Introducing 3 of the WCs most common units, with common names, but uncommon desing.

After a few months of nothingness, here we are again. I introduce the RAH-76 Commanche, RAH-76C Chinook, and the Humvee. I'll got for the Commanche first.

The Commanche is essentially an Orca, with the diference that it is not as fast, and has ATGMs instead of a heckload of rockets. It uses a set of Electrically powered impeller engine, powered by a gas turbine inside of the body, and it has batteries, so it can fly for a short while almost loudless, and by the use of advanced nano materials, it repairs itself in time, on the other hand, is also rather fragile. As board cannon it has a railgun, to which it can re-rout power from the engines and other systems, forcing it to land but vastly increasing the power of the railgun, but due to the higher speed, and thus higher friction, lowering the range somee. And it disables the ATGMs, But it can also re-route power from the weapons and hull regeneration to the engines, and so making it much faster. It also has room for 10 soldiers in the back. 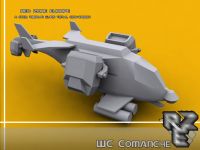 And I continue with the Chinook, which is a modified Commanche, for cargo operations.

Think of Orca dropship, with active defence and a gun. Its ammunition dump for the missile racks was replaced with another power source, allowing for extra thrust. In fact, it can lift 90 tons beside itself, quite impressive, huh? hehe. And it only weights 3 tons by itself. It can, just like the Commanche, re-route power from all systems to the engines to allow for faster travel, but it can also travel slower, but power up an active defence. It can carry a single vehicle, up to medium tanks. It can also land and provide repairs for nearby vehicles. You should never leave it without escort tho, it is a found prey for any AA capable unit. It also lacks the sensors of the Commanche, which lowers the accuracy and firepower of the railgun. Hull regeneration and reinforcement of the RAH-76C however are superior to those of the RAH-76. 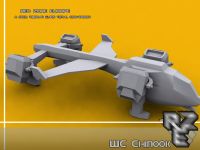 And last but not least, the Humvee. Not much to say on this one: It can now cloak, is faster, is better armoured and has a minigun as well as active defences and ECM projectors. 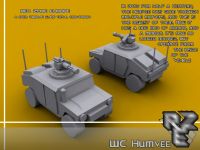 That's it for now. Textures will follow once I got the lazy arse who I am to skin them :P
Comments

There is no naval war in this mod, so no, I won't do anything with denmark, and I don't like the mowag eagle either.