So, what's been going on with REBIRTH? Lots of behind-the-scenes coding, for a start - a new program I've written from scratch for the project, new AI code and a series of important discoveries on the reverse-engineering side.

Whilst it may appear as though progress is not being made, behind the scenes there have been several important developments:

LIBRE is a piece of software I've written from scratch to edit limit break data in both the PSOne and PC versions of Final Fantasy VII. This allows me to change the statuses, power, accuracy, effects and elements of limit breaks - very important to any rebalance project. I'm pleased to say that bugtesting has finished and the app is fully operational. The link to QHIMM offers further hyperlinks to download locations (for the interested), and was written in Python + WxWidgets. 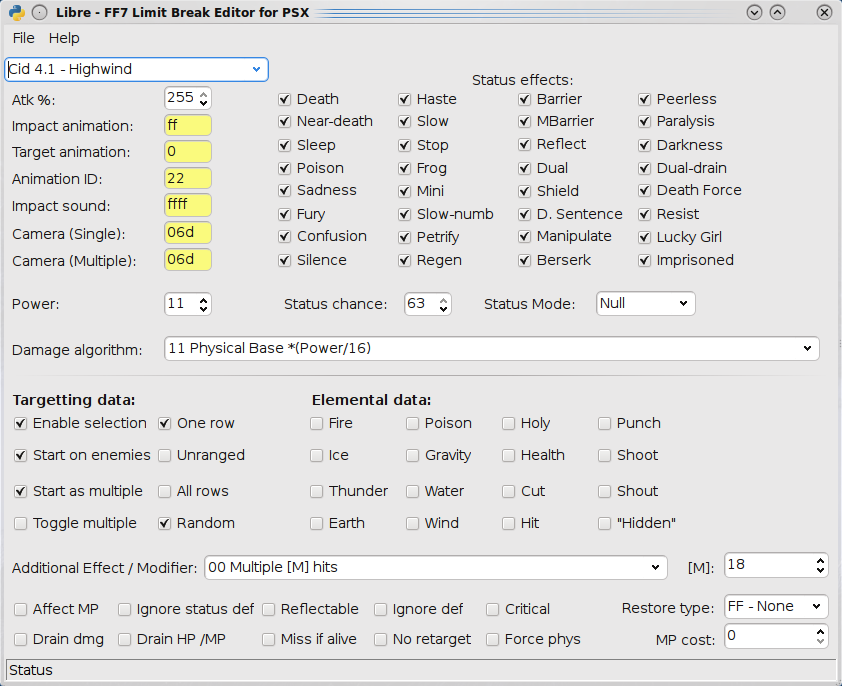 Above: LIBRE running on Kubuntu

Secondly, I have also located vital sector look-up data on the PSOne version. This won't seem to mean much to non-modders, but it basically means we should be able to exceed the normal filesize limits on the SCENE and KERNEL files, which store enemy and character data respectively. Most importantly, that means no more limitations on the size of AI. Which brings us to...

Welder, an AI project that should make writing AI code far swifter in future. I've created a header that can be easily pasted into an enemy's script, then a series of 'plugins' that over-rule the monster's default attack under certain circumstances (for instance, making the monster heal an ally in critical health). I hope the first testing version of Rebirth will feature several monsters with brand-new AI formed in this way.

I just found out about this project and I am beyond excited. Are you planning on releasing a guide of everything that's new? Wouldn't want to miss a thing!