Random Quest is a short mod made by Chris Fox and Jose Ameyugo. It is my personal favorite as far as mods go; but thats just me. Lets dive right into Random Quest!

Random Quest. This is one of those mods that's really just one of a kind; I dont think Ive ever seen anything based in source that follows a similar theme or story. Thats mainly the reason why I like it more than most modifications; Its a refreshing change that creates a world that involves lots of story, a good bit of combat, puzzles, and some kickass enviornments. Ill start with the storyline :) 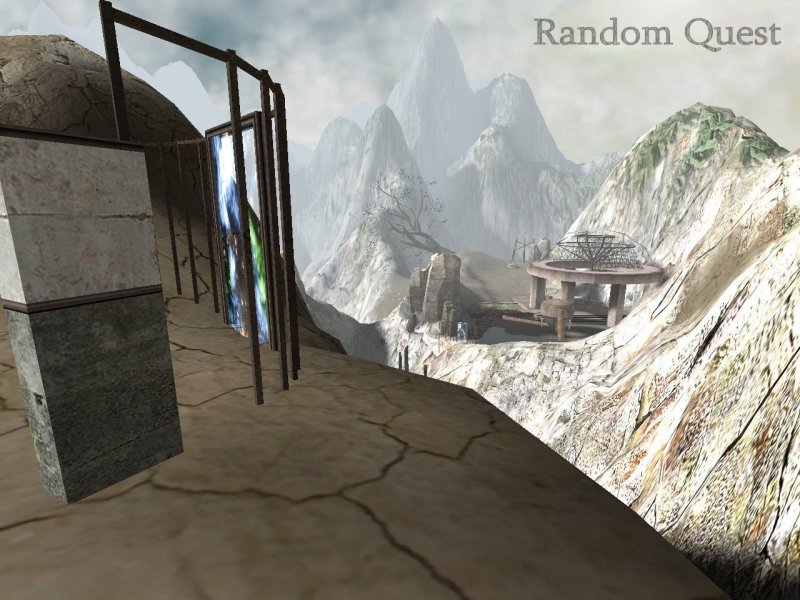 The storyline in Random Quest is original and interesting. Most of the story is expressed through clips of audio that are intended to be that of the main character. I would usually dismiss this as a cheap way to easily explain your setting and story, but it fits well with the enviornment and doesnt disrupt gameplay. It also doesnt dump information on you or spoil anything; It just gives hints and sets the mood.

The player steps into the shoes of an unnamed person who lives a pretty dull life. But right after you enter the mod, you are thrust into an enticing world of mystery and adventure. It often is left very vague, but still keeps you informed to the point where you still want to keep playing. This adds a layer of mystery to the whole mod, and makes you want to discover more about the world youre in. But sometimes you really want to get some more answers; certain people may be very annoyed by this. 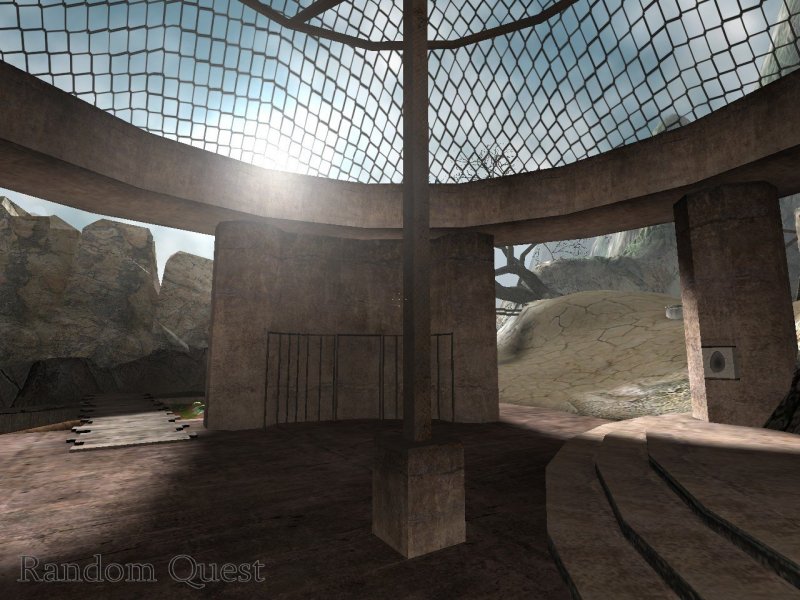 For the most part, the mapping in this mod is some of the best I've ever seen. The locations are unique and often really push the envelope in terms of source's limits. The locations often remind me of the games Myst and Riven, and are linear and easy to understand. The maps really take you into the game; you really feel like youre in the game. There was one part underground that wasnt just drop dead gorgeous, but it was still was pretty cool. Great mapping. 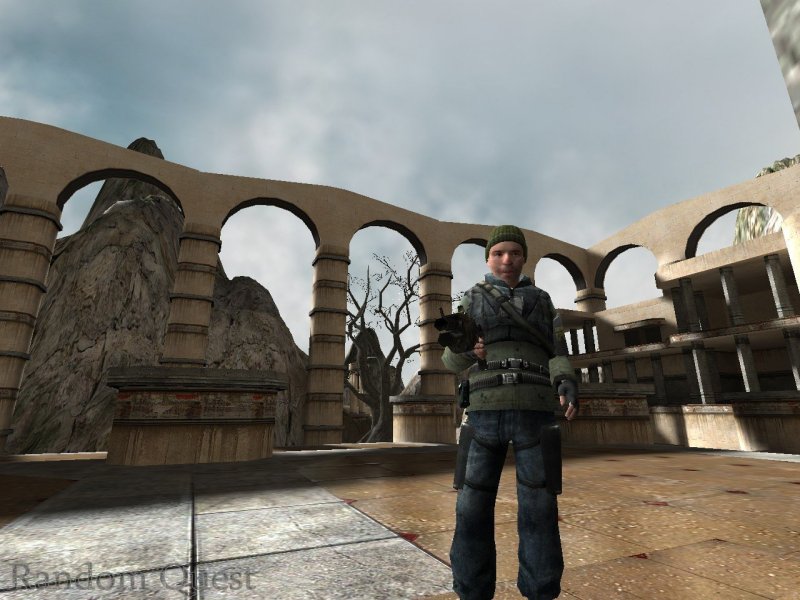 Gameplay is the one part of the mod I can really beat down upon. Its not bad, but still not just amazing. In terms of puzzles and the such, theyre all very cool and pretty fun. The visuals wrap you up and make you feel like part of the world, a pretty rare thing these days. But the combat is not so great. Its often very hard, making you hold desperately to those last few health points. But these intense action sequences can often be avoided, letting you choose whether or not to attack. Unfortunately, there are several sequences where you cannot avoid combat and must fight a very difficult battle. Also, the finale is rather disappointing in comparison to the rest of the mod.

On a lighter note, some of you may really enjoy the difficult action. Also, there are several new skins that are pretty nice. 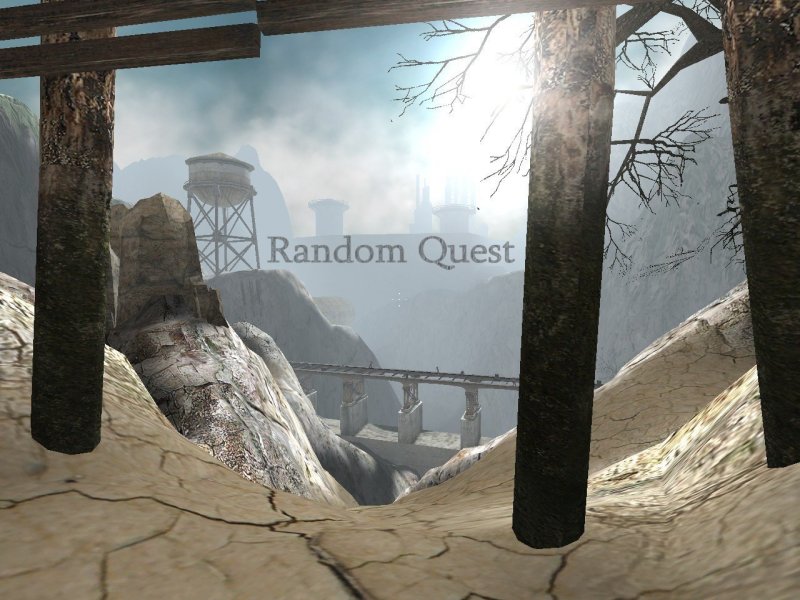 
I highly suggest you play this mod. Its short, but a ton of fun. Its also got a certain... Feeling to it. Probably a combination of the surreal enviornments, the strange story, and the mystery. Definately worth a playthrough, I dont think you'll regret it.

Random quest was one of the best hl2 mods i have ever played! And story was really awesome especially mapping and gameplay. (all gameplay except shooting)

OK, I believe Ill get to this soon.

Yeah, it was an fantastic mod!
I played the demo and after the release of the demo I never heared something about it. Lets see if its released. Nice writing and I agree with the 9/10.

Its released. And I didnt realized it O.O"
And I'm watching it O.o

Hey man, it's hard to keep up with new releases sometimes. :)

Great pick Raider. I admit that it was some time ago that I played it, but I was very impressed and remember it well. I also believe there's supposed to be another chapter to come from Chris and Jose for this mod. I'd like to think so...

Your spot on in that was a truly unique piece of work. The vista views from the " castle " you were captive in were fantastic. I loved the puzzle element of traversing the outer wall over that abyss - fell several times ! Also the element of no " pre-packaged " story was just fine with me.

The environments were immersive, wide open and mapped very well. That bridge mission alone had some damn fine work put into it. Loved that bridge ! Inspirational.

I honestly don't remember the story very well, but I recall some vague confusion ( without frustration ) as to what exactly my role was, but it was presented to me in a way that I was happy to curiously continue on with. I had a good time following the bread crumbs !

The entire thing was set up for a continuing storyline, so I really hope they do. I myself present it with an 8.5 out of 10.

Ive actually talked with Mr. Fox. He intends to continue Random Quest's story arc once The Citizen 2 is finished, and Im looking forward to it!

I see your comment has a clearer view of what the mod really is; you see, when I played Random Quest, I was at a certain stage of my life where playing mods were just that thing that gives you an indescribable feeling of wonder. It multiplies everything awesome in a mod times like 50 and blots out everything thats wrong >_> And when I played it, I felt this feeling the whole way through. When I replay the mod, I cant still feel that, and therefore I love it. Thats part of the reason I like it so much, even though I believe its still really good on its own :P

Refer to me as "The RQ addict" lol. GOTTA GO GET MY FIX MAN!!

Your making perfect sense man. That's why I've played " Minerva " like 5 times. They're few and far between, but you never forget the mods that hit your sweet spot. That alone is 1/2 the reason I enjoy the modding community so much. Glad to hear we can look forward to some expansion on the RQ story at some time ! Keeping my eyes open.

I can imagine that. Minerva is good in my eyes, but not to die for. Thank god I wasnt in this stage when I played Jailbreak or Checkerboarded Hopes 2...