In this post I will write about the quest system, the crew screen, exploration events and orbital space stations.

Hello everyone, in this post I will write about the quest system, the crew screen, exploration events and orbital space stations.

One very important aspect of the game is the quest (mission) system. The basic concept is the following: The player travels to various inhabited objects (e.g. planets, asteroids space stations or NPC spaceships) and can receive missions from the Mission Board of each planet or from individual NPC's. Each mission has a specific goal that has to be accomplished in order for the player to receive the reward. The reward includes credits, trade goods or improving the diplomatic relation between the player and the faction that offers the mission. In many missions there is also a time limit. Exceeding this limit leads to termination of the mission and any penalty for the player that was attached to the mission is applied. Failing or rejecting the mission will also result to a penalty.

There are several types of missions. Some examples include escorting a ship to the requested destination, attacking a fleet, transferring a passenger to a destination, Bounty hunter missions, Plunder a trade route or destroy an incoming asteroid and more. Not every type of mission can be offered by every faction. For example the pirates will ask the player to plunder a trade route but on the other hand, a non-pirate faction will offer Bounty hunter missions instead. There are also diplomatic missions which have as a goal the improvement of relations between two factions. The missions are mostly offered by planetary Mission Boards but occasionally the player will be asked to complete a mission offered by an NPC spaceship. Once the player has accepted a mission from the Mission Board (or spaceship) it appears into the fleet's mission screen. In Mission Board (and in the fleet's mission screen) there is also a button that highlights the solar system mission's target on the map (if this solar system is discovered). 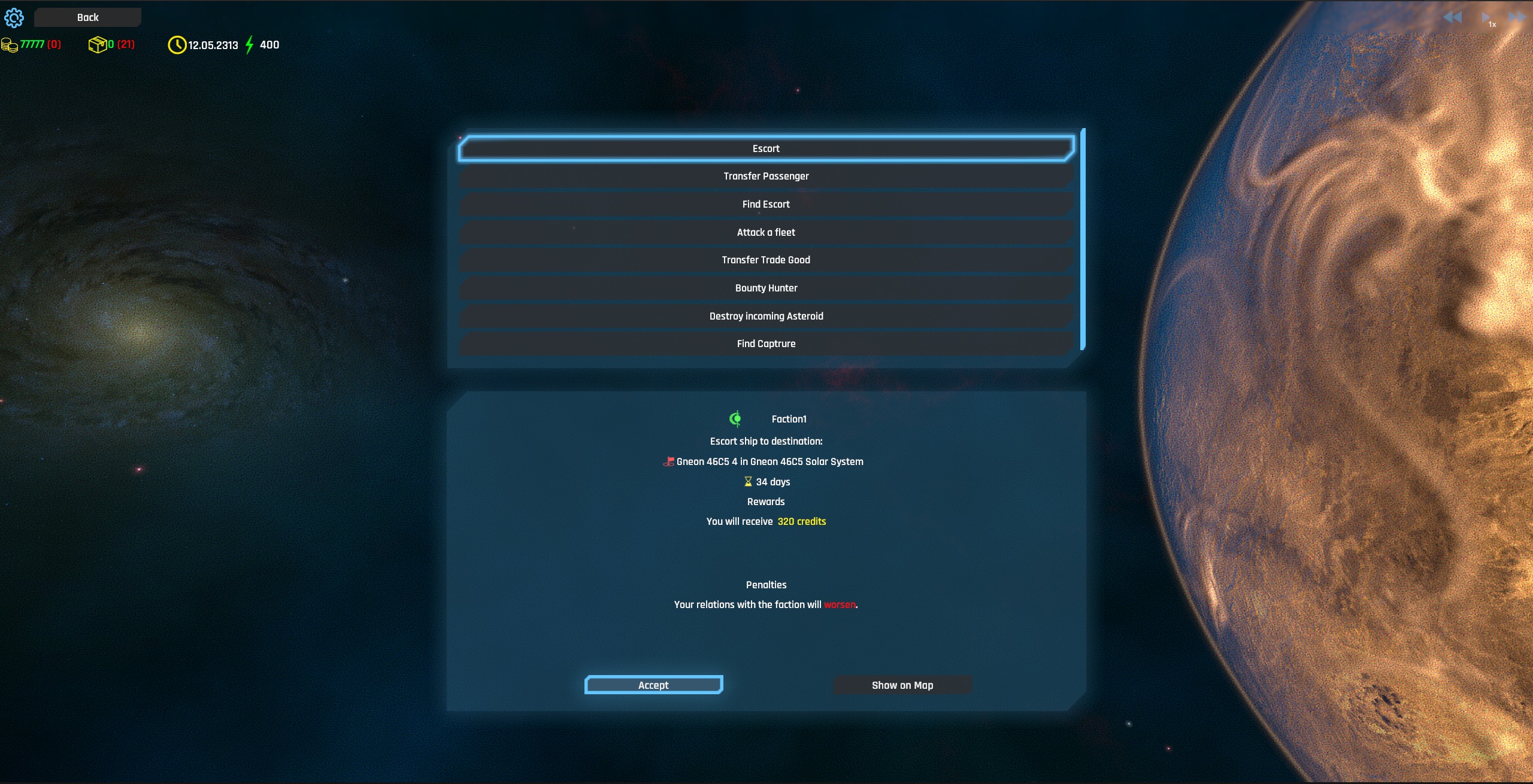 The entire quest system has been refactored, so it is now much easier to add various types of quests.

Each spaceship according to its class has a number of crew slots. The crew slots and their availability is shown at the Crew screen. To each slot corresponds a specific rank. Hovering the mouse on an occupied slot shows the stats of the crew member that occupies the slot. The player can switch the position of each crew member (but only between similar ranks) between the fleets spacecrafts through drag and drop. The purpose of the crew is to operate the various systems of the ship and increase their efficiency. For example the captain of the ship can improve all the traits of his/her subordinates by a percentage whereas an engineer can make the engines run more efficiently and improve their stats (e.g. increased max speed and more). Fighter / Bomber Squadrons have Squad Leaders instead of Captains. The slot with the highest rank is shown at the top part of the crew screen and it is occupied by the player. At the lowest ranks there is a Crewman slot and a Boarding Squad slot where part of crew can be used to man a boarding probe in order to assault another vessel. The crewmen that survive the attack are returned to the boarding slot. Crew can be hired from Crew Lounges in various planets and space stations across the galaxy. Crew can also be dismissed by dragging the crew icon in the Dismiss slot at the lower part of the Crew screen.

Another important aspect is that crew (all ranks) consumes supplies (before that the crew received a monthly salary but this was dropped for gameplay improvement reason). Supplies are stored in the limited space of the fleet's Cargo Bays and are substracted each month from the stock. If the entire supply stock is consumed the crew will start to receive periodically damage in health and if health reaches zero, the crew member dies. Supplies can be bought in various markets or can be found during exploration. 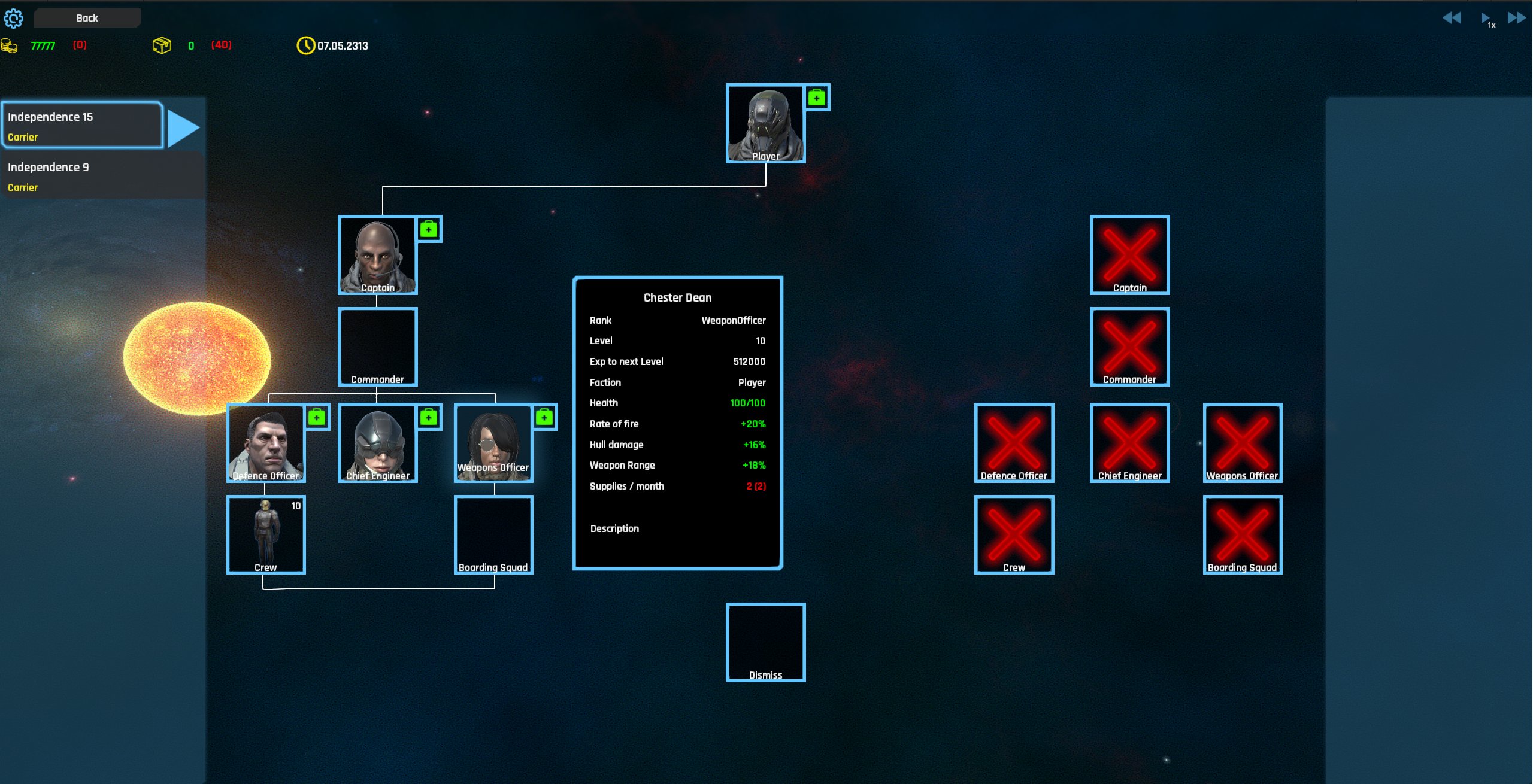 The crew screen where the player can review that fleet's crew and assign its positions.

In Stellar Insurgency, the player among other things has the ability to explore planets, asteroids and debris fields (or planetoids in brief). Each planetoid has its own category of exploration events based on its class, so for example it is highly unlikely to find a stranded man craving for help on a Volcanic planet or a Gas Giant. The exploration of a planetoid can be achieved through exploration probes or fighter/bomber squadrons that scan the surface of the planetoid for anomalies. An exploration probe can be launched from a capital ship as long as it has the required component which is a probe launcher. The number of exploration probes a fleet can have is limited and it depends on the capacity of the cargo bay. Exploration probes can be bought in various markets across the galaxy. On the other hand a fighter/bomber squadron can explore a planetoid’s surface as long as it has a scanning device component. Exploration via a squadron can take place an indefinite amount of times, however each time a squadron scans a planetoid there is a small chance of losing a member due to the perils of this endeavor. 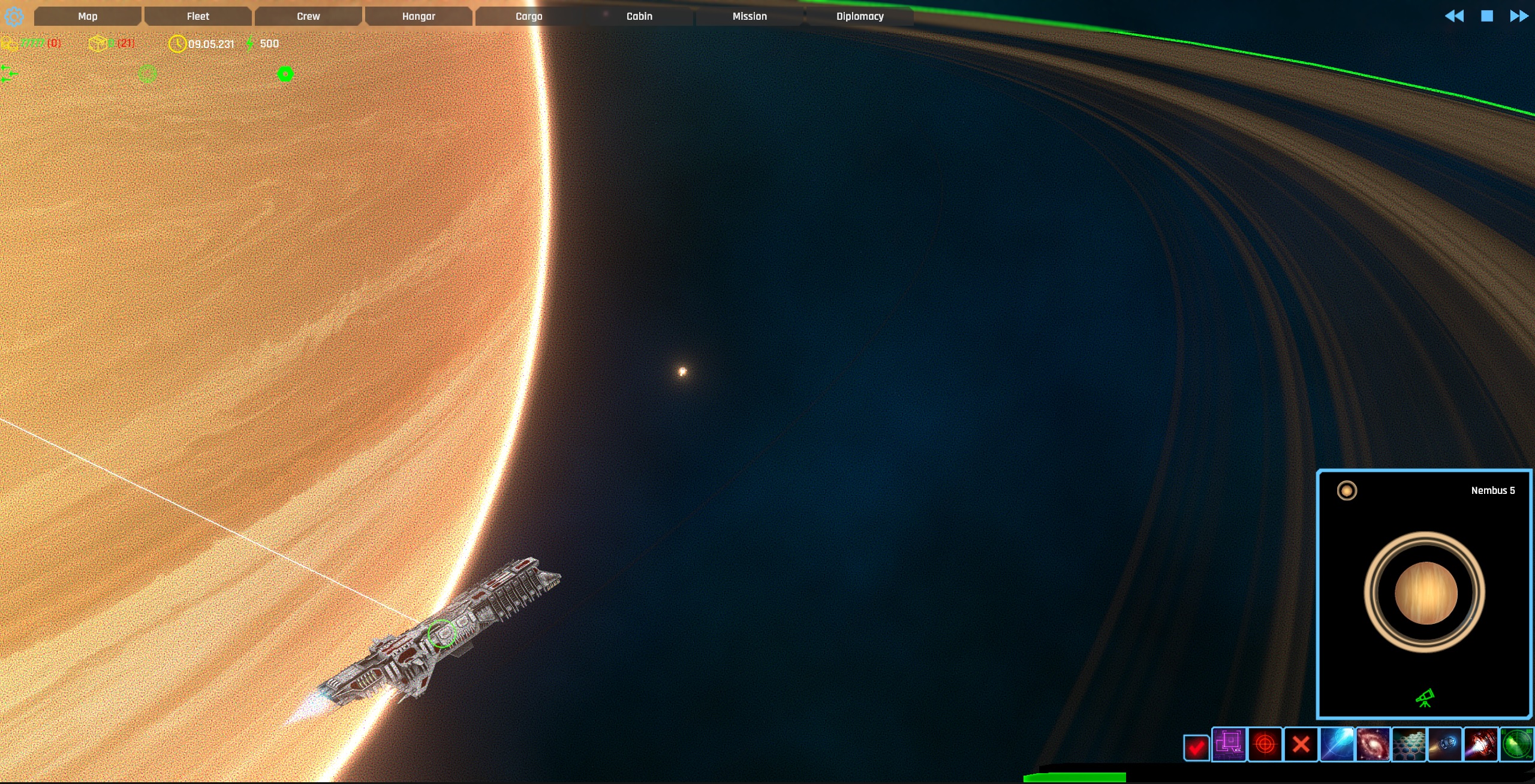 This spaceship has just launched an exploration probe towards the surface of this uninhabited Gas Giant. 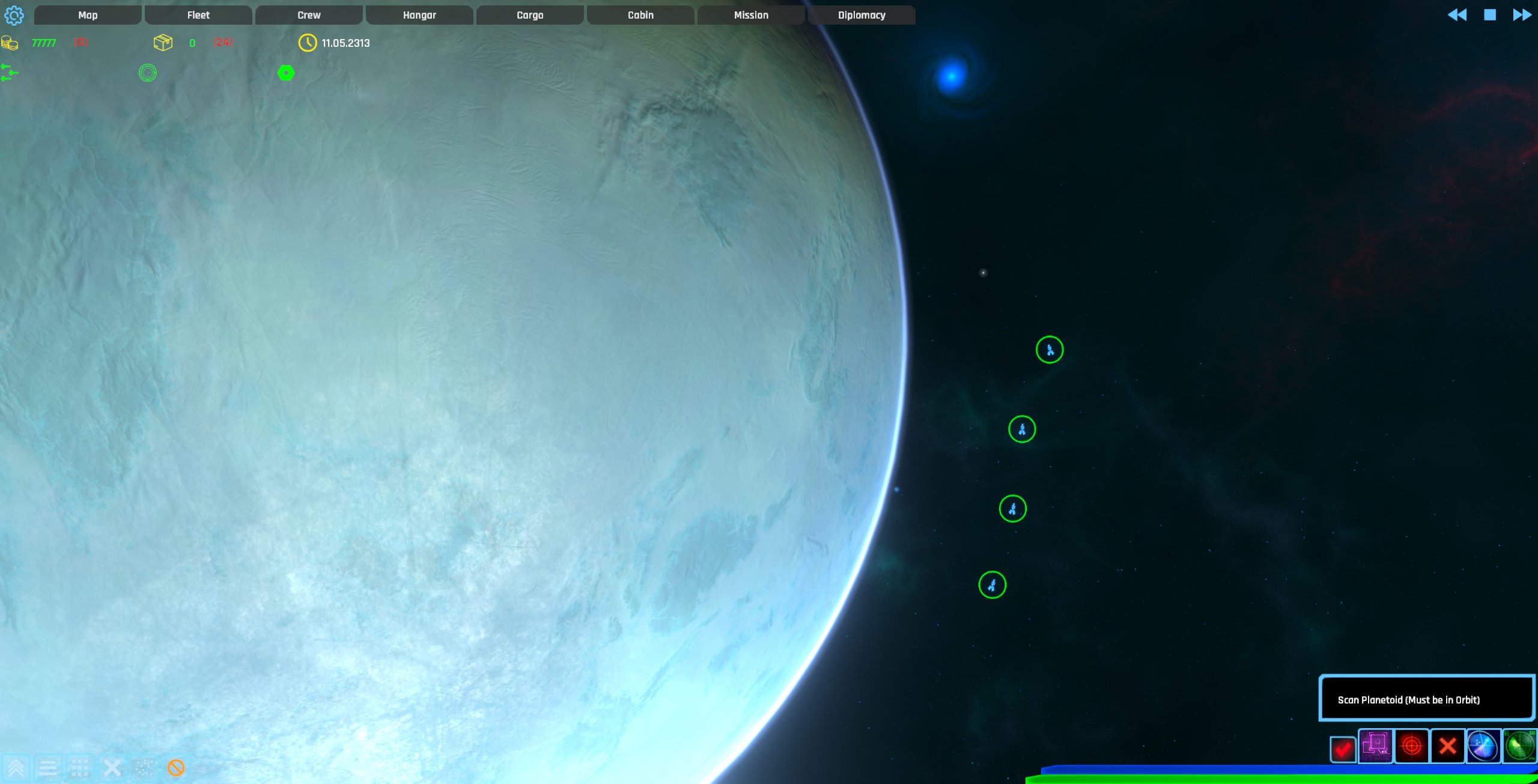 This fighter squadron consisting of four fighters is ready to explore the surface of this icy planet. The squadron has to be equipped with a scanning device. 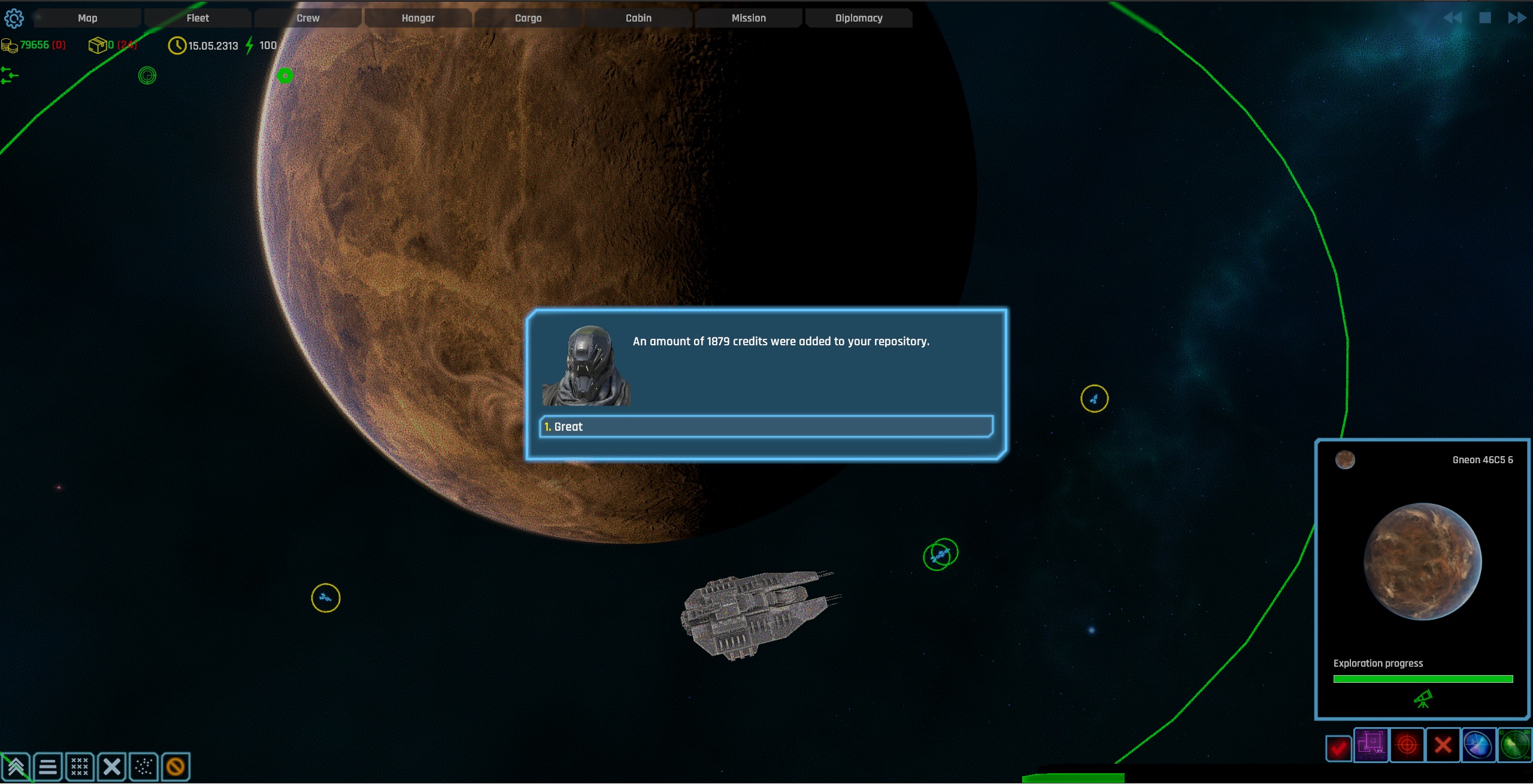 After scanning the surface of an uninhabited planet we found a stash with cash.

Recently, orbital space stations were added to the game. Those behave like spaceships except that they always orbit a planet. Orbital space stations are mostly found on highly developed planets (e.g. capitals), have markets and shipyards and are completely destructible. 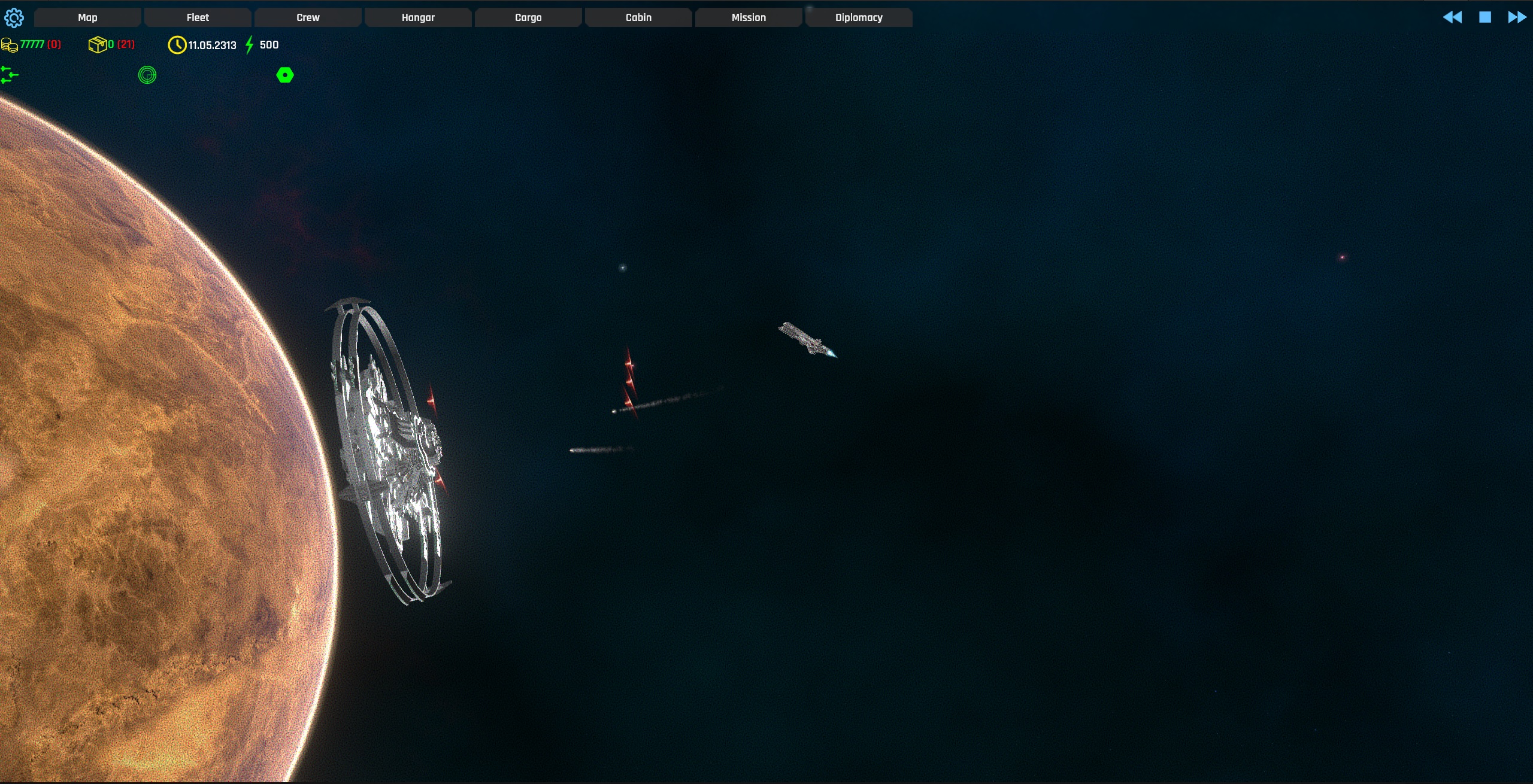 Our fleet consisting of a lone spaceship is fighting its way through a hostile Space Station.