Post news RSS Q&A: All the logic behind the experiment.

Because everything has sense. It's not just random stuff put together.

Why do you have a camcorder during the experiment? It represents you playing the game. At the start, the game tells that you need a camcorder and a microphone to play it. You are recording yourself, your voice and the game itself to upload it in the internet (YouTube).

Why YouTube at the end? Because there's where you upload all you recorded with the camera you had in the entire game. As like you recorded yourself playing the game and uploaded to YouTube, in the game you are INSIDE the experiment and you do the same. You record it and at the end you upload it on YouTube.

Why are you sexist? I am not sexist! Remember one of the first posters? "This experiment will study your reactions (...)". And that part was part of the experiment. Even the game wasn't sexist, it was just playing with you. It wanted to see your reaction in that room as you saw that to play the game you had to be a male. And your reaction was? Did you laugh? Did you get angry?

Why Afraid of Monsters? I told Team Psykallar about putting a tribute to that game into my game, since I loved it, and they accepted. It looked like a great idea. It was a short room but I loved the art style. Do you want a funny curiosity? The drawings were made in Paint.

Is there gonna be a sequel? Yes! But not directly. "An Apparently Normal Room" will take you into another experiment where you will be trapped inside a single room, not like Insert Title Here where the point is to enter in a lot of rooms. But in that apparently normal room, stuff is going to happen and they will observe you.

About the Psychological part? I love psychological things. I want the player to thing what to decide in a lot of ways. In Insert Title Here I wanted to see what would do the player in two extreme situations. I put another psychological part in Unnamed too, and I will do the same in An Apparently Normal Room.

Why is that last room in all of your games? It's just a funny cameo I wanna add in all my games. In Unnamed it was in one of the ending optional rooms. The poster changed from Insert Title Here to Unnamed and the computer was better. The bed is still the same model.

Do you like being observed? I liked that room. In case your gameplay or let's play has a facecam in it, It would be a similar situation, since you are being observed by a lot of people on the Internet. Do you like that? It was a curious room I wanted to add.

Nameless and Anothink? Nameless is my obscure side. The account where I make horror games like Evil. Disturbing games like FUN. Anothink is the fun and experimental part, like Insert Title Here, Unnamed and An Apparently Normal Room. 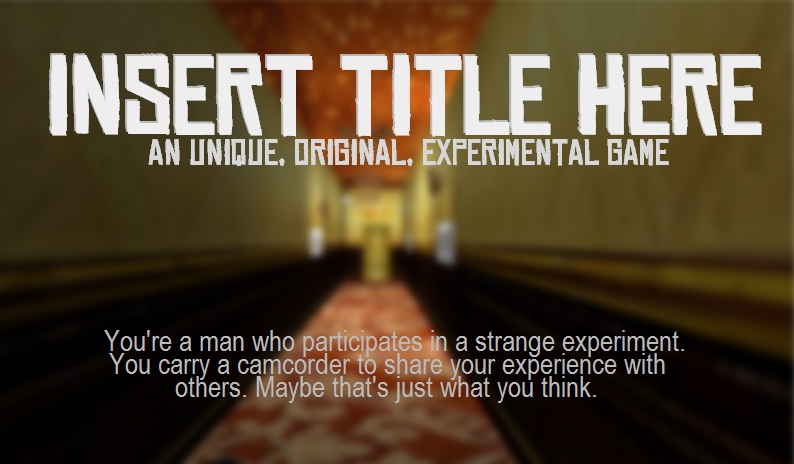 kinda luv it but pewdie played it soooooooooo