Project Berimbau has been quiet for the last couple of months, and now it is time to come forward with the project and the team behind the newly named title Blade Symphony.

Hello there, my name is Michael Sanders -- some of you may know me as urinal-cake, the Lead Producer on the Source modification Dystopia and the Studio Director for our recently announced independent development game group, Puny Human.

Roughly a year ago, our team had the honor of meeting some of the developers responsible for the Source mod Project Berimbau. After some discussion, and a few months of working together, the two groups decided that a merger of Ninja Workshop and Puny Human would be in the best interests for the two groups and future projects by Puny Human. Thus began development on re-creating Berimbau using the talent from the combined team. Starting from scratch on a programming and level design end, Project Berimbau has become a harmonious blend of game play and graphics.

Today, we would like to announce Puny Human's involvement in Project Berimbau and some recent news about it. First, we have almost completed pushing Berimbau through a full development cycle similar to that which Dystopia received; it's fun to play, looks great and we hope to release it very soon! We are also moving forward with our final name for the project; every name since has been an experiment in finding the identity of Project Berimbau, sifting through numerous themes and uncovering the real "feel" of the game. We feel like we have named what the game is really about, so Project Berimbau's final release name is Blade Symphony.

By the end of the week, we'll be releasing a gameplay teaser trailer for Blade Symphony to the public, showing off the combat and beautiful art in the game. We'll be showing the teaser first over our Devapalooza stream, which has been online this past week showing the Puny Human developers hard at work on our projects; then, later in the week and on that same stream, we'll be having an internal LAN tournament between the Puny Human developers playing Blade Symphony. 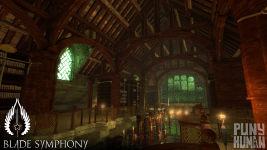 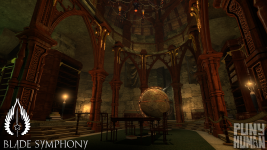 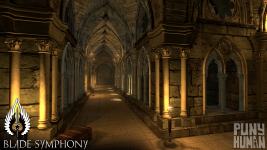 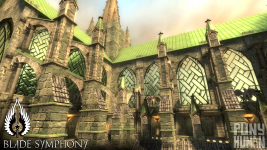 You can stay tuned over the next few days by joining us in our IRC channel #punyhuman on irc.gamesurge.net, keeping in touch with us on Facebook or following us on Twitter. Look forward to more awesome information soon!

I gotta search more about this project and puny human
and good luck with this mod :)

great lighting on those maps

Urgh! Why is that you always have to wait for mods to be released? Now where's that time machine i made last year?

YOU.
ARE.
GODS!
First Dystopia, and then, this!!

This actually brought some joy into my already bright day. Nice turn of the events I might say and i love the new name. caused me to go to listen "Symphony of Destruction" by Megadeth. ^^

awesome source pictures... i love to see when devs are able to let it look as it is a completely different engine! also fresh ideas for an originally first person shooter - good luck and tracking for sure!

The new project looks epic! keep up the good work.

It's actually not a new project, it's quite old project that was named Project Berimbau just couple of days ago. They just decided to group together a while ago and gave a new name to it.

I am enjoying working with mFlux :)

Hi sverek! Nice to hear that you are working on my second favourite mod aswell :P

Looking incredible. Would believe those are screenshots for a full retail game :)