Overview of the penetration mechanic enabling projectiles to pass through and impact multiple objects. Introduces a new series of "hypervelocity" weapons.

At this stage of development I wasn't planning on adding new mechanics, but projectile penetration has been hovering around on my to-do list ever since early playtesting showed the game would really benefit from a way to shoot through objects.

The ability to simultaneously hit an entire line of enemies, or even fire through obstructions to hit a target on the other side, really does add a lot of tactical depth. An additional mechanic also enables yet another category of weapons with meaningful variety (<--a key requirement when adding any "new stuff"). More on the new weapons below. Penetrating projectiles will also be a great addition for the Hunter class robots, which are so crazy aggressive they'll start shooting as soon as they detect you, even while you're behind a wall or on the opposite side of some obstruction. (You might remember them from the 7DRL if you got far enough.) Their combat AI type is literally named "INSANE" =p

Each weapon specifies a maximum number of obstructions its projectiles can penetrate, along with a separate chance to pass through each consecutive obstruction. For example the basic Coil Gun can penetrate up to two objects, the first at a 60% chance, and the second at a 30% chance. A third object after that would still take damage, but the projectile would stop there. If any chance fails along the way, the projectile does not continue beyond the point of impact, even if it destroys the object.

You don't have to destroy something to penetrate it--the mechanic is completely independent of damage, meaning you can now even fire through walls to hit targets on the other side without taking down the wall itself. I'm sure players will find some creative ways to screw with the AI that I'll have to address later... but it's fun!

A majority of projectiles cannot continue after striking their first target, and of the original item set only ballistic weapons of the slug-firing variety (e.g. Gauss Rifle) were given a chance to penetrate one or two obstructions. However, these are not a very reliable way to penetrate a target. At best you can hope to get lucky with them.

New variants of those ballistic weapons are designed specifically for penetration and thus much more reliable. They carry the "Hypervelocity" designation, and may penetrate up to three or four obstructions--meaning some can hit up to five targets! 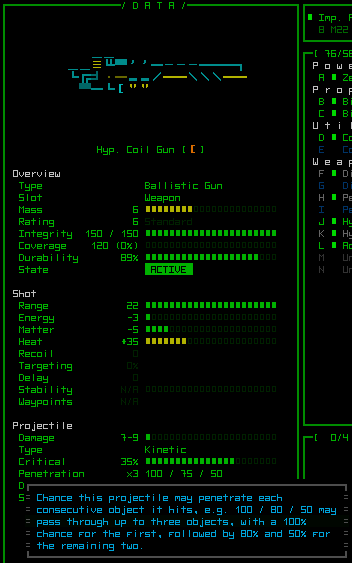 Hypervelocity variant of the Coil Gun.

Hypervelocity weapons exchange damage capability for penetrative potential, but make up for the lack of collateral damage with a greatly increased chance of a critical hit due to passing through an object.

In a related development, critical hits now destroy props, too (not just robot parts/cores), otherwise this new category of weapons could endlessly fire through machines to hit targets on the other side without ever scratching the machine itself, which looks weird and doesn't make sense (props are normally destroyed only when a single damage application reaches an integrity threshold, making it impossible for weak weapons to chip away at a stronger obstacle to eventually destroy it).

The line-of-fire visualization for aiming got a little update since obstructions may not necessarily block a shot anymore. It will now assume maximum penetration for the given weapon(s) and highlight any penetration points in blue. 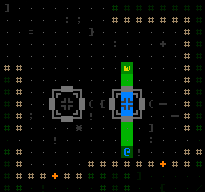 Aiming a Hypervelocity Coil Gun at the Watcher on the other side of a Matter Pump. In a best-case scenario, the projectile will penetrate the entire pump.

The entire path is considered valid (green) if there is enough potential penetration to reach the intended target. This new feature minimizes the need to count spaces.

Firing through enemies. Eventually I just shoot right through them at the Fusion Modulator, which explodes.

Firing through an Atomic Centrifuge at an incoming squad. I'm at an advantage since they won't shoot their own machines.

Locating a pair of Grunts on the other side of a wall via simple sensor array, taking one out through the wall with a Hypervelocity Railgun.

this is such a great mechanic. does it only apply to ballistic weps?

Yes, and only a subset of them, gauss-type weapons; *and* even then only those marked hypervelocity are more reliable in this way--others are pretty much circumstantial where you may get lucky so choose your positioning wisely, but don't count on it. It's fun, but we wouldn't really want to overemphasize this mechanic and have *lots* of combat going on through walls =p.