Several models are underway, and the Model Viewer has been completed, allowing in game renderings of WIP models.

Since the last update, I have been working on finishing the Model Viewer - a tool that allows modelers, modders and game testers to load scenes into Aero Empire's rendering engine (download link here: Moddb.com). A lot of work went into debugging the tool / rendering engine to get it to work on ATI graphics cards. I have tested it on a variety of ATI cards, however there are still a few problems to work out. There may also be more incompatibilities that need addressing on other graphics cards that I have not yet tested. If you would like to help in this effort, feel free to download and try the model viewer application and report any problems or bugs you encounter.

Large Residence by Necro
Model is almost done, and preliminary textures have been added. 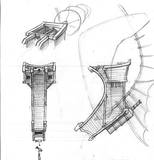 That's it for this update. The Gyro (see last progress update) is currently being tweaked, and Onerom has started work on the female character 1 model. Additionally, Cobalt, our writer, is drafting a complete history of Aero Empire's world, and will be posting an update when it has been refined and edited.

I really love the technical drawings you guys have for both Architecture and Vehicles. Great work.

Everything is shaping up very well!

Thank you! I'm a fan of Timmon's technical drawing's too - he's something like our technology guru (not sure how technical my buildings are though, lol). Glad you like them, though. That's always good to hear. ^-^