Let's take a little insight in to what has actually been accomplished so far and what's still left to come.

I've been hard at work on this game for a long time now and it wasn't until recently I found a way to actually convey a clear and interesting story with workable gameplay. My scope for the game was always huge but never really comprehensible or connectable to overall lore of my main series. I had this super badass character with these amazing abilities, but the explanation for how he got those powers or why he has them just never landed enough to where it just felt interesting.

(Despite the subtitle, the japanese in the second logo I know is not accurate, I don't even remember where I grabbed it from. For all I know it's just a bunch of jumbled characters thrown together.)

I started work on the game back in 2010, the project was soon canceled due to lack of scripting knowledge that I possessed.

(Though the art direction greatly improved, that honestly was really it)

Moving onward I tried to revisit the project back in 2012 and this time I was confident that I could pull it off but it was again met with the same fate but also due to the lack of limitations in the engine I was using. 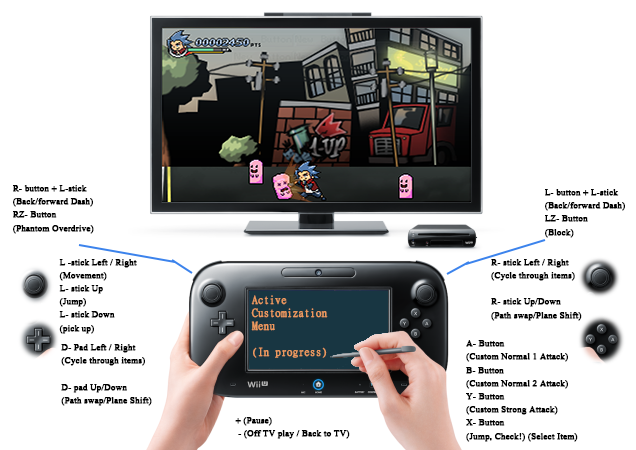 Once 2014 hit I once again wanted to give it ago but this time tho it suffered the same fate it was more due to the fact that the team I had established for the project wasn't stable cause I wanted to try to develop the game in Unity this time.

(A test image I put together to actually see if this would be worth taking a shot at before actually starting.)
Putting aside everything else that was going from then to now, I recently again felt that if I took a shot at the game from different angle and different play style then I just might be able to complete the game solo and then hopefully after gain support from players to make remake the game for next-gen platforms and PC using my original gameplay idea along with the new and revamped story. That is why now I'm taking things down a notch and turning the game into a turn based RPG while still using the sprites from last years try.

Despite the fact the gameplay is currently made with mobile in mind the overall battle system is made to seem a bit flashy and powerful, whereas the main protagonist, Leoth has plenty of moves that appear to be like super moves if you will. I feel they help the character give off a sense of being able to handle really anything that's thrown at him.

In the beginning of the game the played will be prompted to before jumping into actually getting to play the game to select a sort of class that you will utilize through the course of the game. You're selected class abilities will be gain a boost in attack strength & leveling, while the opposite class enemy will gain a boost in the damage dealt to you.

Simple enough right? well I think so too, currently the plan is to incorporate all the no battle features, cutscene yada yada before moving into the battle system scripting phase. I figured that by doing it this way it will cut development time to a low because I won't be too drained to do anything else besides test the game for errors. My last game I was working I start mainly with the battle system first which took me about 3-4 months to do solo. It was a nice system but it just wasn't fun and felt dead. But the worse part is I just felt too drained to even go back and try to tweak it cause it needed too much work and thus I never finished the rest of the game. This time around I'm going to flip the tables and invest time into making a more simple but fun and quick system that players will hopefully be able use without getting bored.

But enough about that, there plenty of more updates to talk about, but I'm saving that for later. Right now it's dev time so please look forward to future updates.