Post news RSS Progress on the next pre-alpha release

I'm glad to report that things are moving on despite everything. Next closed pre-alpha version release coming within this year is looking pretty realistic at the moment.

I'm glad to report that things are moving on despite everything. We've managed to get a decent rhythm going with Uku, the artist I hired for the teaser trailer, by having weekly Skype meetings and I'm already excited for some of the stuff he's drawn and animated. I hope to show a sneak-peek of some of it soon enough.

Sonuba, the composer, has also been doing some music for the trailer and he shared some of his work in progress on Instagram the other day. Check it out to hear the direction we're going with this.

Meanwhile I've been fixing loads of bugs and adding some small features and touches I deem essential. With all this it's actually looking pretty realistic that I'll finally get to release the new closed pre-alpha version within this year for the first batch of testers who applied for it back in August (if they haven't forgotten about it after the long wait). Also if you'd be interested helping to make the game better you're welcome to apply as well. The game is still far from being finished and I'll keep the number of testers small for now, but for the few helpful fans willing to grind a bit, this is a good way to influence the direction the game is heading. More information is available in our forums. 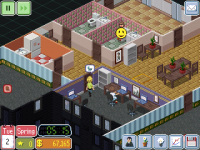 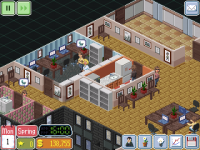 This week I fixed up some more AI behavior, but perhaps I'll leave some additional implementation for future versions, just to get a new version out faster.

There's two big features I still want to add in the upcoming version. One involves redoing the project management UI, which is very cumbersome and hard to understand at the moment. I also want to draw new male character sprites and animation so it matches the quality and style of the female employees. Both involve quite a bit of work, but should be doable within the timeframe I've planned unless something unexpected comes up.

Oh also. In case you missed it, I did an article about Lua scripting in the game last week. Take a look if you're interested what goes on under the hood. Next article in the series will be about AI, so stay tuned!

For comments, advice, inquiries or otherwise post below, drop me an email (riho@tulevik.eu) or tweet me (@tulevikEU).

Very excited to see where this project goes. I have been following for some time now and everything you've shown so far is quite impressive.