Well, I expected to update sooner, But heck, I didn't want to come With too much WIP stuff. So I Coded my brains out(literally), and Got New stuff in. I guess I will start out then! First off. I would like to announce our Functional HUD! Don't get too attached though, This HUD is subject to change.But good riddens, We have a HUD! 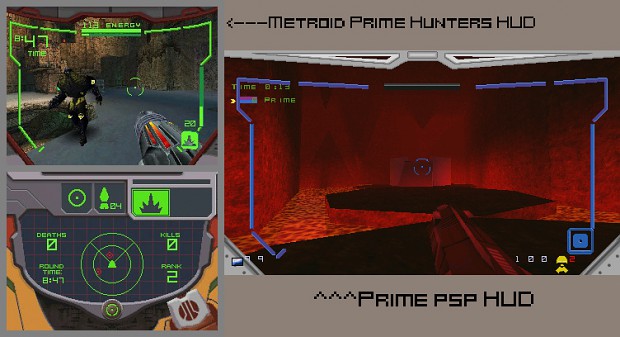 All rights to Metroid and Metroid Prime Hunters belongs to Nintendo Interesting Huh. I still have to move the time and Name, But it will get done. Remember that Prime is going it's own way, so There will be many different things.

Next on the list, I have gotten mapping entities finished. The beams are now obtainable in maps. 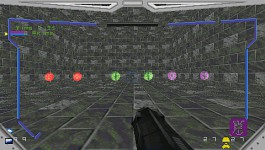 They are nice and shiny, And go fine with the Metroid series.

Not much has been done With our Tetra model lately, So I guess I will post what we have so far. NVMidian is doing a great job texturing her so far. 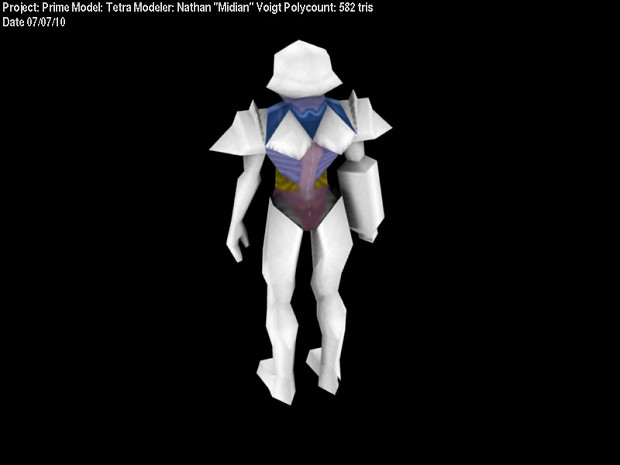 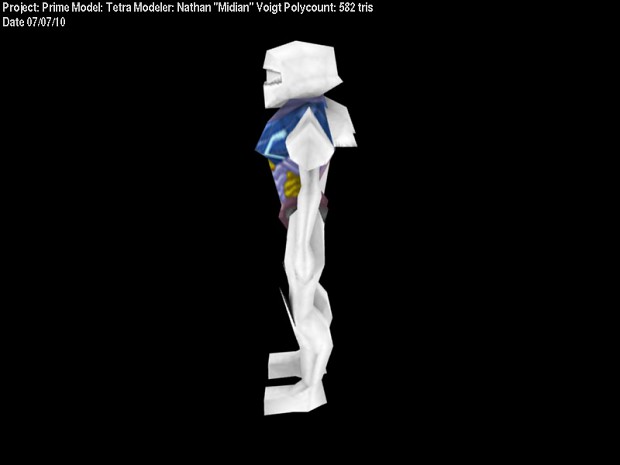 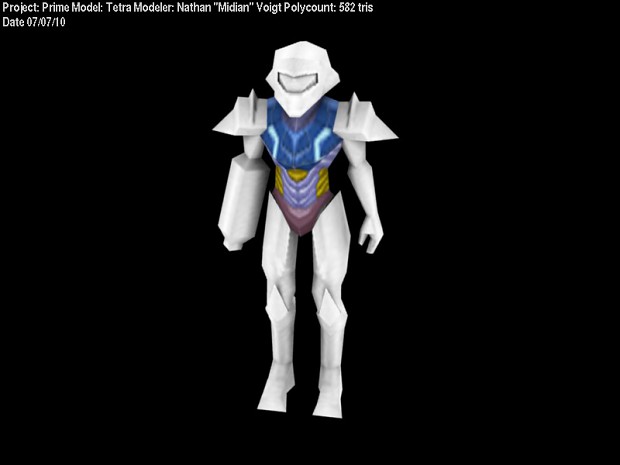 I know in the last update I said there were polys to be taken out of Tetra, Well NVMidian has stated that there isn't. He started and it just made her look bad. But hey, 582 polys is alot better than 1076. So lets just be appreciative now.

Classic and Modern Metroid fans will like this a lot: 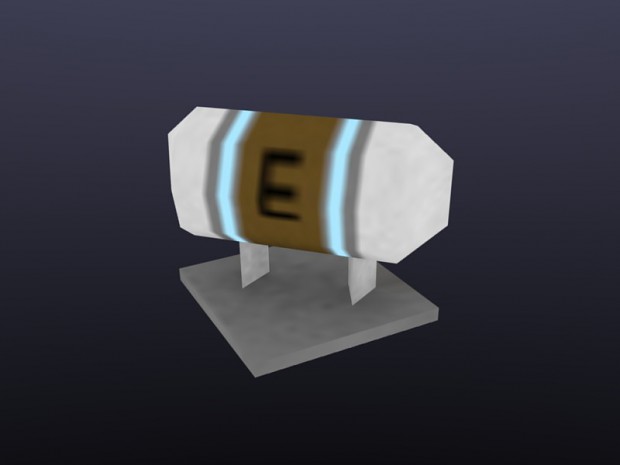 That's right. An energy tank. 84 polys. I have to say It's pretty dang good. I would also Like to note that it is fully coded. Yep, QC side and Engine side.(HUD gets a piece of it as well). Imagine getting a health tank on your psp. Makes me dreamy...Snap out of it! We gotta finish this Update!

So I have a few beams in my head, and I decided to code one of them. The splaser beam. I think in the Metroid series, it could shoot through enemies and walls. So I tried that in quake, and It didn't work very well. But It's result was astonishing. It actually bounced off the player. That is actually a neat little beam, because you could take out multiple enemies if you timed it right.

Here is a list of the beams In Prime.

it will most likely change as we get more beams In-game. I can't remember if I announced it or Not, But thanks to a coder Redrum, I was able to add The charge beam to Prime. The code was basic, and for a Bow, So I did alot of adjusting and got it to Work Exactly how I wanted it too. And thanks to another Coder, Sajt, I was able to add Double Jumping to Prime. Thanks for the Help Guys!

I feel Like it's best to leave you with a Gameplay video. After a Month of Work, I feel it is time.

just to note, This is around 3 weeks of work. We have thrown everything else out except Ghostfangs transform code, which has still been altered a bit.


Just to note, The morphball system has not been added yet, But will once Tetra is finished. Then the Morphball should be bug-less. I also threw that Map together in around 15 minutes. So It's not fancy. Just a demo. Alot of stuff in that Video is being worked on still, or changed.
I guess my last piece of news is that, The pc build of Prime is up and running. I hope to release a beta of Prime in around a month. It is actually releasable now, But I want more in-game.

Thanks for watching Guys! Track us as we go!

I hope you dont make an FPS. Metroid is about exploration, atmosphere and isolation. I hope you understand that.

This IS an fps. Don't worry, there will be exploration and such. It will still be from level to level, But I plan to maybe code it so that one you beat the game, you will goto a lobby and you are able to choose whatever levels you want to return too.

And I also plan to have Enemies like Metroids, Chozo guys, Big bosses and the works. You will also be able to explore in levels and find hidden secrets like easter eggs, Find energy tanks, missiles, new Beams etc. I have a plan, Don't worry

You're talking to a group that holds at least a few Metroid purists. I've played and beaten every Metroid game there is to be had. From what I understand of Mexi's vision is to utilize the Kurok/Quake engine as efficiently as possible to re-create the Metroid experience, and that entails the values of the gameplay you mentioned. That being said, this is in keeping with Hunters as well as the Prime trilogy and thus is a hybrid FPA, First Person Adventure with shooter elements. That's the core of the Prime experience and that is what we're working so hard to try and recreate.

You guys are doing a pretty amazing job, looking forward to more results. :)

Looks great, all i would like to add is all you need is the actual "shots" from the different blasters, i saw the normal blaster and i noticed the ricochet are still nails. But so far it look great!

Like what do you mean? The richochet aren't nails. They are green cylinders, and the sniper is a red cylinder. There really isn't much left from quake except the sound effects and Monsters. Even alot of the sound effects have been replaced(You guys will never see them, they are just for testing purposes)

looking pretty damn good guys. i really like your player model, looks exceptional for only being around 600 tri's. keep it up!

Nice one, man! Seems like Quake, but Quake has much worse graphics and... better optimalization ;) I hope you'll fix that. You should have a beer!

We are working on Graphics. I can't say that we Can take quakes feel away. But we sure are going to try.

The game looks like its coming along ok, though I can't say that it really reminds me of Metroid. I know it's early on in development but remember how organic the Metroid level design was. I'd say when most people think, or reminisnce of Metroid they think about Super Metroid. I feel the same as Mentor2 I got an idea of Quake more than Metroid, that being said I cant say that Metroid Prime really felt like "Metroid" either. What excited me the most about the upcoming Metroid: Other M was the fact they they implemented a somewhat heavy focus to the traditional 2D sidescroll gameplay. Good luck with this project!

I mean.. Yea, We could make our textures 256x256 and Have amazing graphics, We could also make humongous Detailed maps and have 1500 poly, detailed models(Ours is still detailed), But since the quake engine wasn't meant for psp, we aren't. This quake engine is just too dang limited. NVMidian told me that Metroid Prime Hunters samus model was over 1500 polys. AND THE DS HAS A 100MHZ PROCESSOR! SO... We will try. If Bread releases his engine, I want to adapt to his.

really impresive you are capting the idea of metroid prime i guess this and solitude will be my favorite homebrews.
just 2 questions
when will be a beta???
and what you think about solitude???

hm we are hoping to release a beta within a month.
I personally think solitude is a very good game. So far, no competition. Remember, I said so far :D Just kidding, they make good work.

i cant wait to see good lock with the proyect.
i will track this game,i hope much of you guys

Thank you for the support :D

Around August 19th Will be our first beta hopefully.

" hope to release a beta of Prime in around a month. It is actually releasable now, But I want more in-game."

hey man, i have already spent 40 hours playing Primes multiplayer. A few changes and a couple more multiplayer maps and i think we got us a beta!

Not to be blunt, but why did you release this 'alpha'? The game's far from playable, there was no point in releasing it.

I felt the need for it to be played. I went against all odds and released an Alpha. It is far from playable from a metroid game. other than that, it is a heavily modified Kurok.

But I plan another Alpha once we get alot more content back in.

Why do you plan on going from an Alpha, to another Alpha?