This is a preview of all our work and achievements during 2016 :)

Hi, guys, I think it's a good tradition to make an article at the end of the year with a preview of your work. And I'm happy that we actually made a lot of stuff, maybe more than 2015 :) (the preview of that year you can see here)

I'll also use this article to adress a matter that really bothers me and that I think it's important for the mod. It's about our beloved FAQ. Be honest, guys, is this really useful? Has anyone actually readed it? How we can improve it, how to make it more visible or easier to understand? Any feedback is welcomed :)

Alright, I will struct the article in chronological order, starting from January 2015 so it may look a little bit chaotic. I will mark some hightlighted moments of our work, but I will also include some new information in some places, so pay attention or you will miss the latest GaW news ;)

So, we started the year with a picture of our clone plans and the work done: 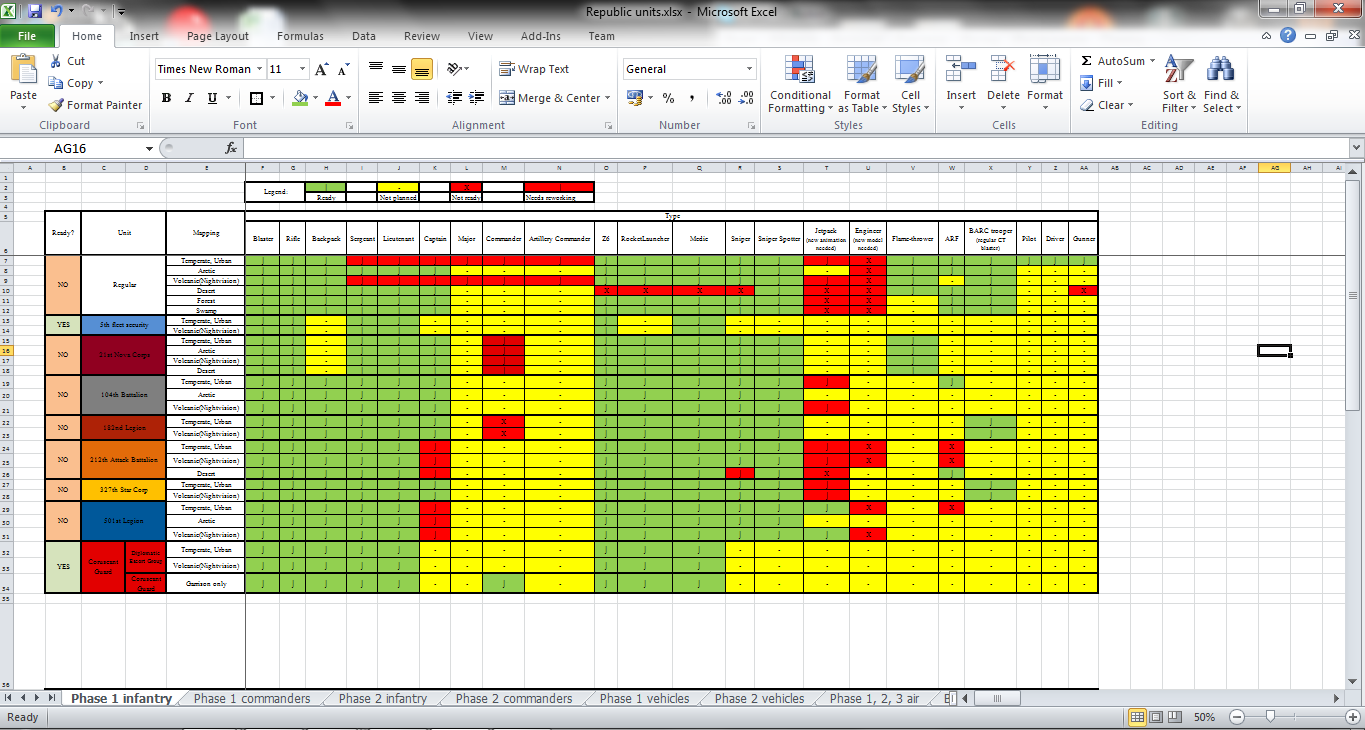 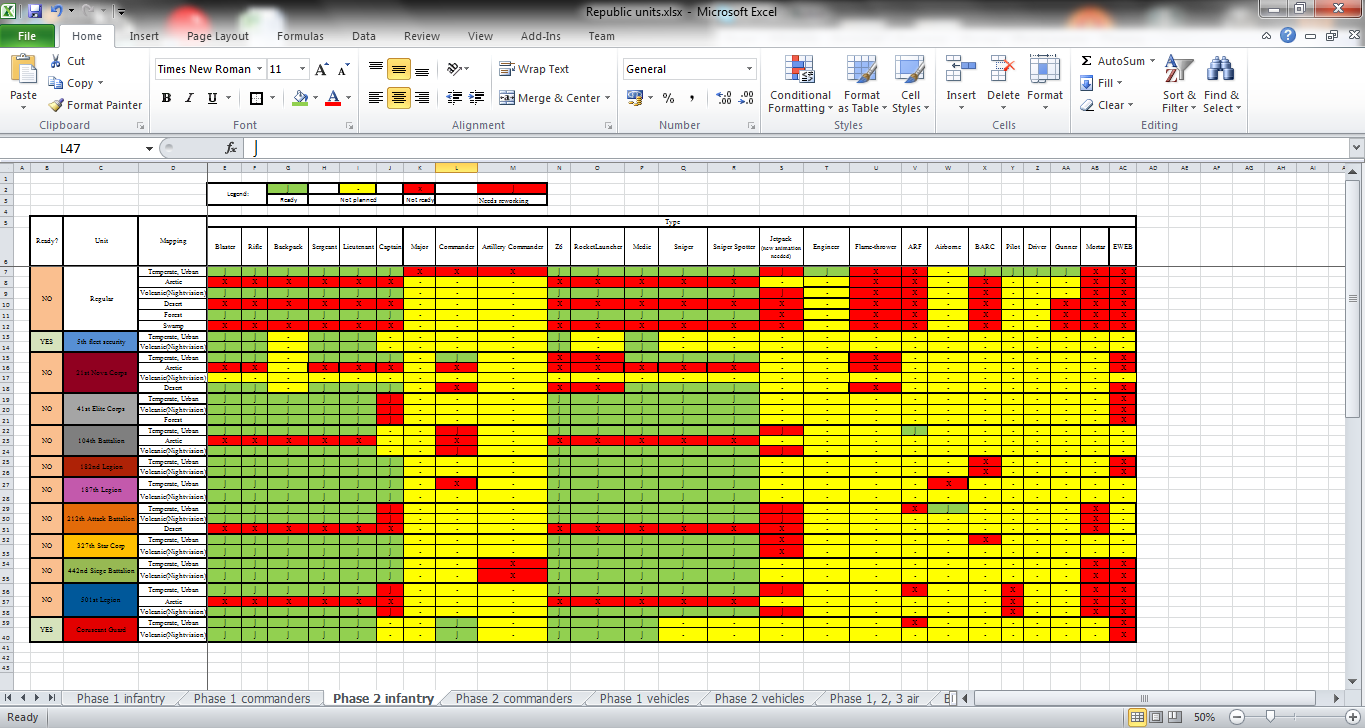 You can see, we definately made some progres with the clones. What we have left is very hard and I think it has to wait a lot, as we are planing to focus now little more on CIS land units in 2017. 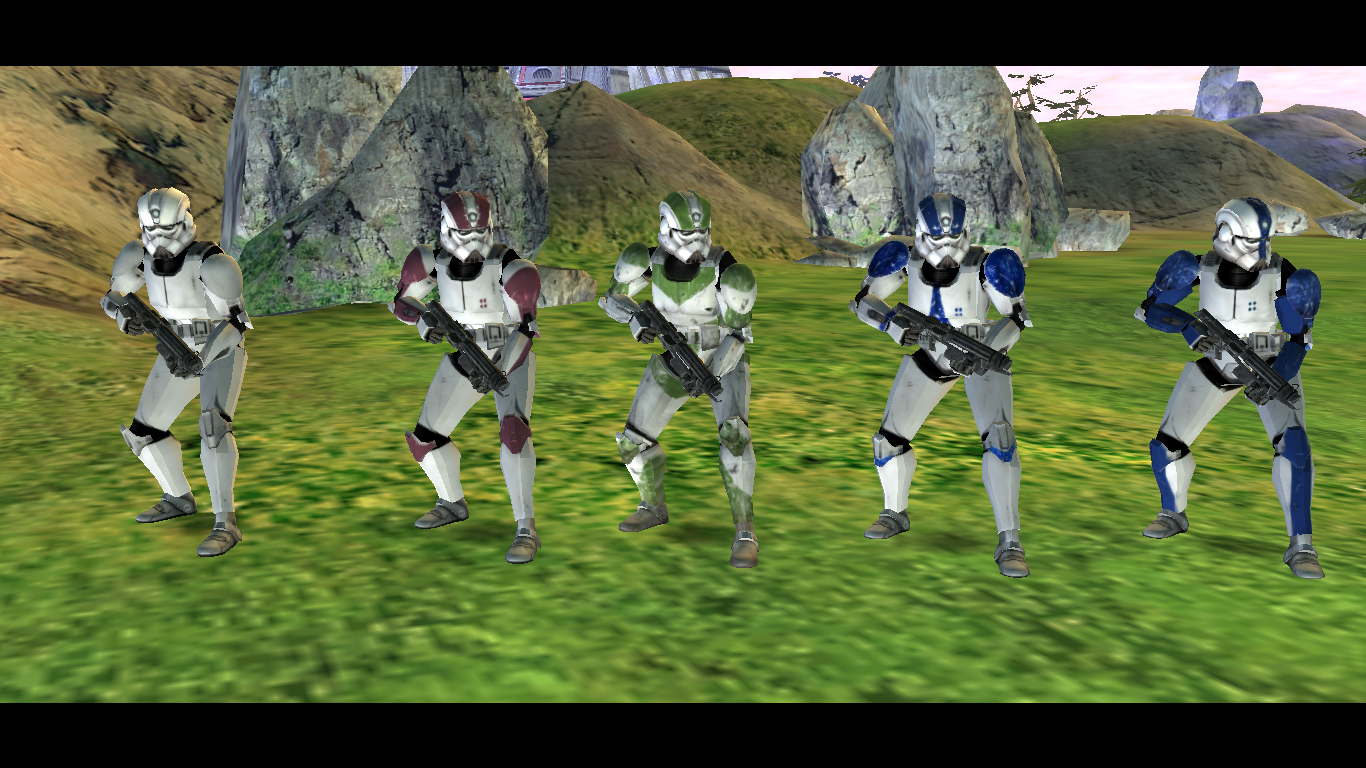 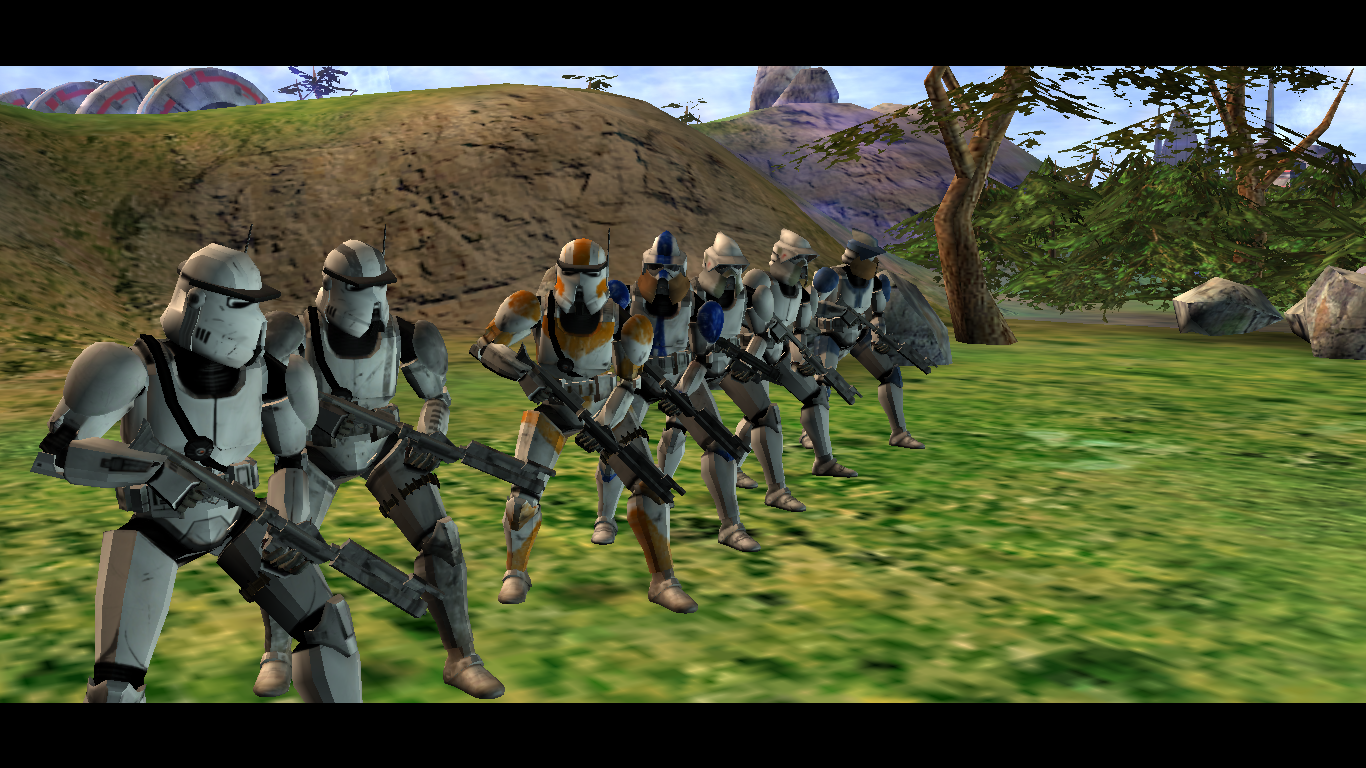 with their respective AT-RTs(here and here) and camoflage armour, e.g. forest camo: 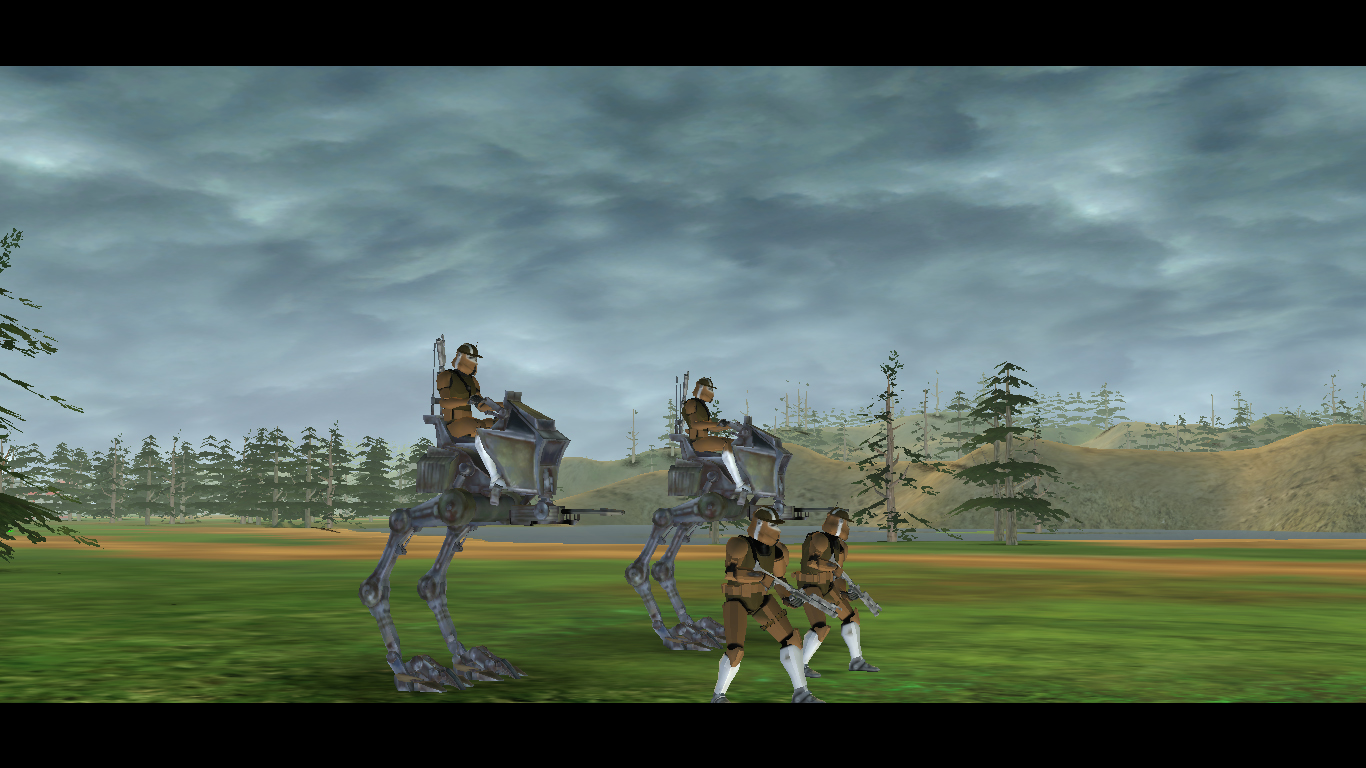 We worked also on some famous heroes 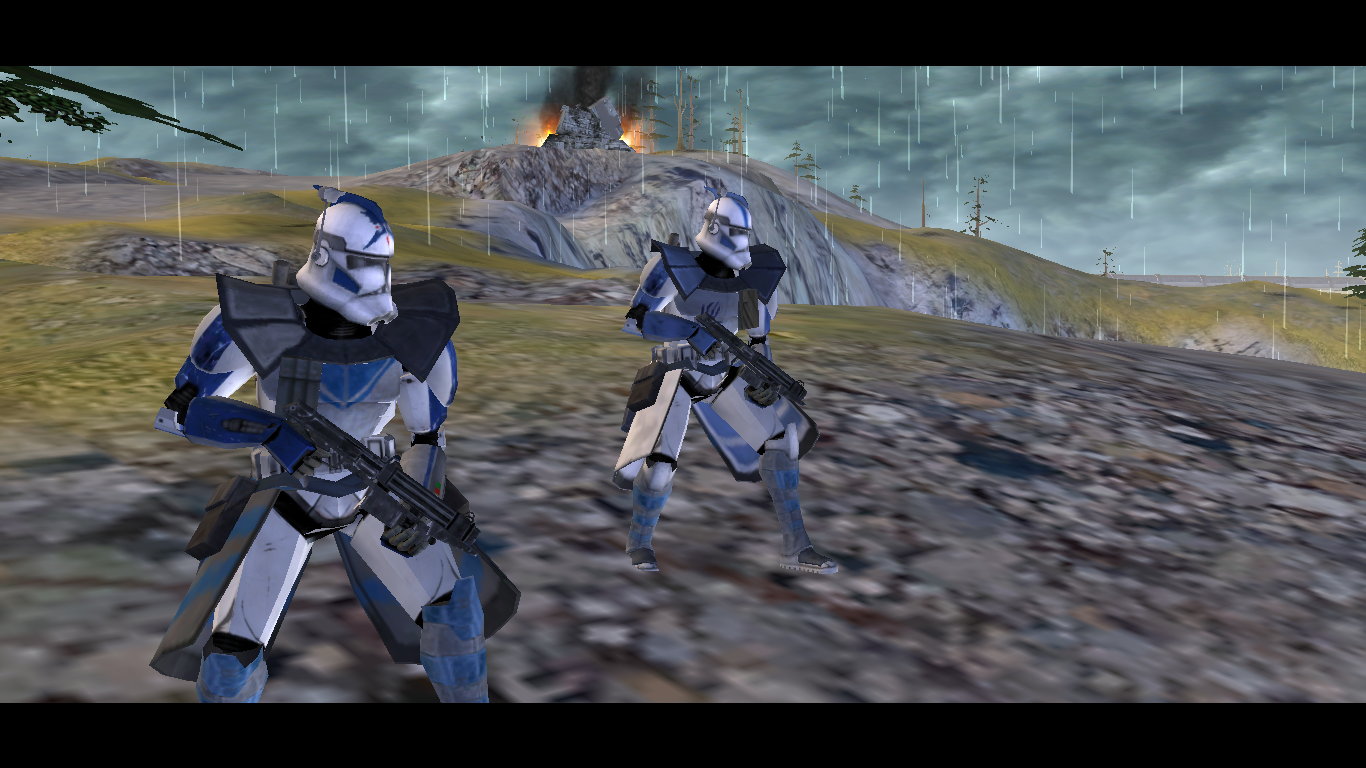 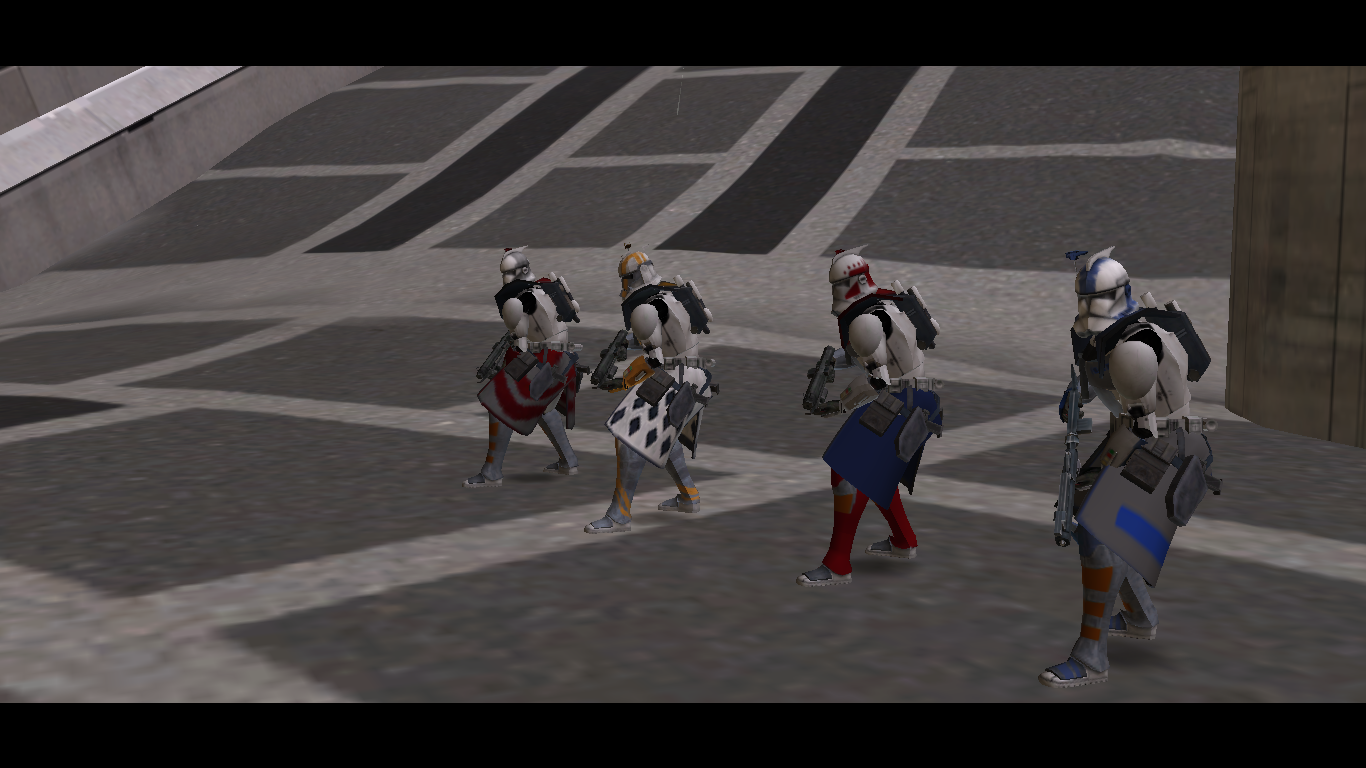 And on some that we created for you 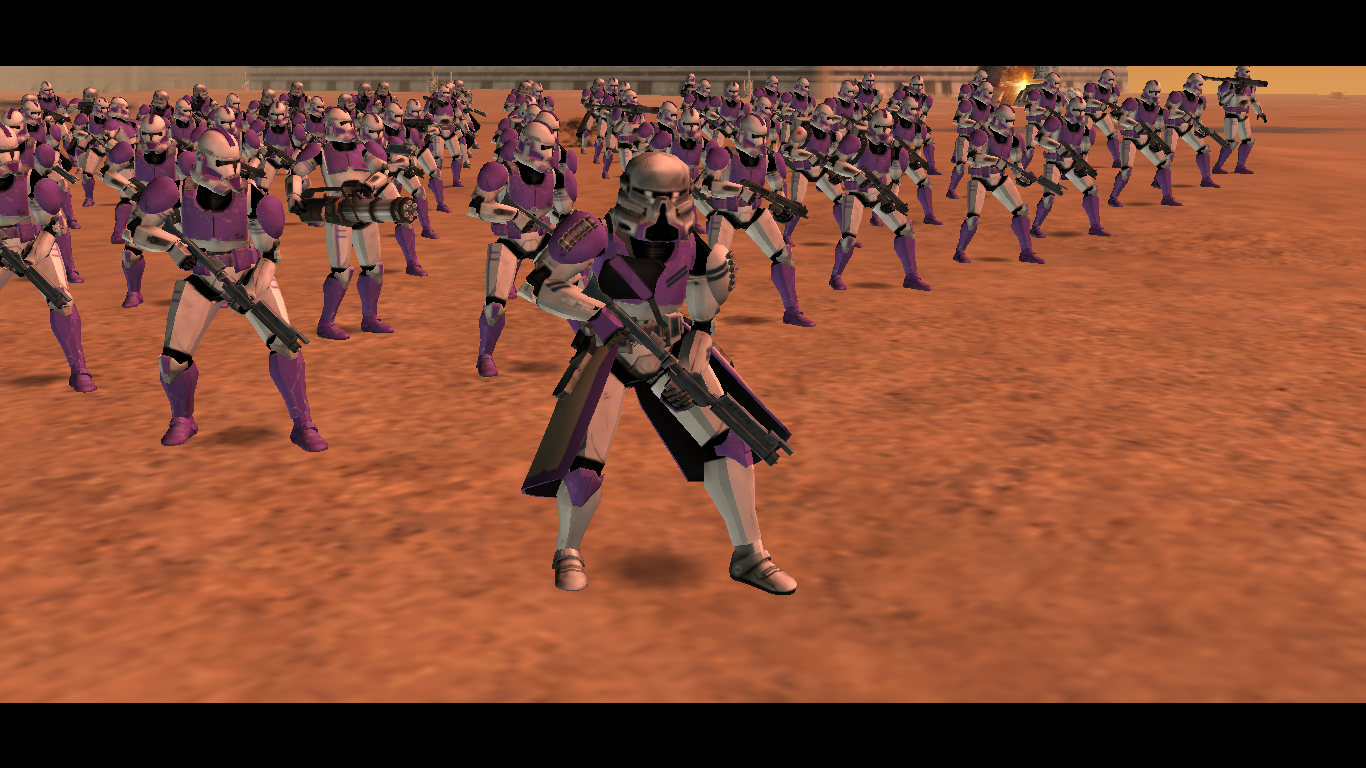 In February we reached 1000+ followers and what makes us happier is that we managed today do gain the trust of 1,288 people. Thank you all!

After that we made a small deviation toward space units, with few nice models from Clone Wars Adventures like this Acclamator 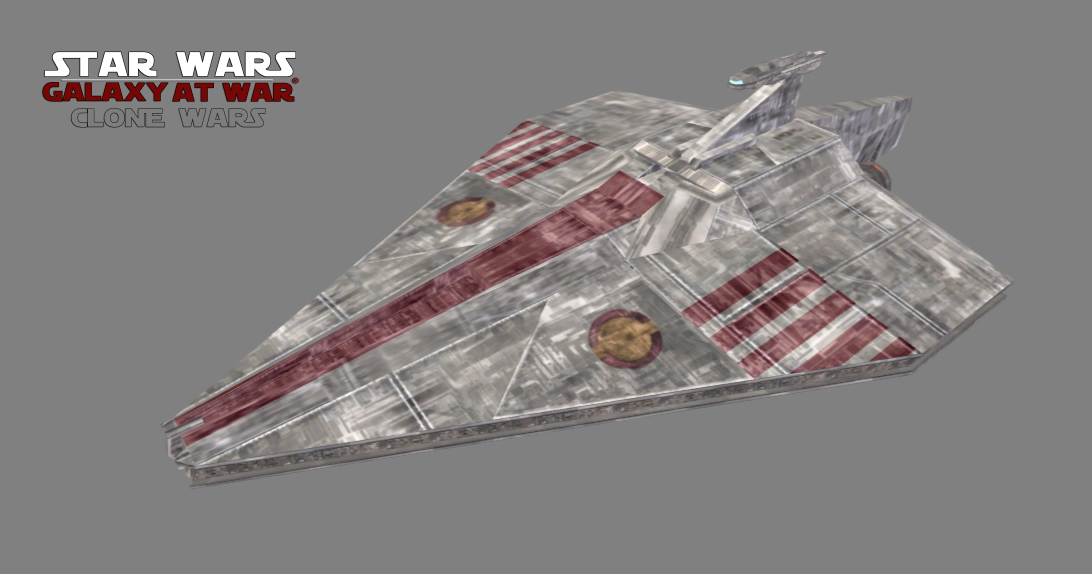 But we quickly continue with the countless Republic's infantry units we are going to add, full companies of identical(e.g 21st Nova Corps) or highly customized (e.g. Torrent company heroes and pilots or Ghost Company heroes (Cody will receive new shoulder pads and the pilots are ready, we are just waiting for the good moment to show them)) clones.

A lot of them follow the canon, but I also made this two by my own design 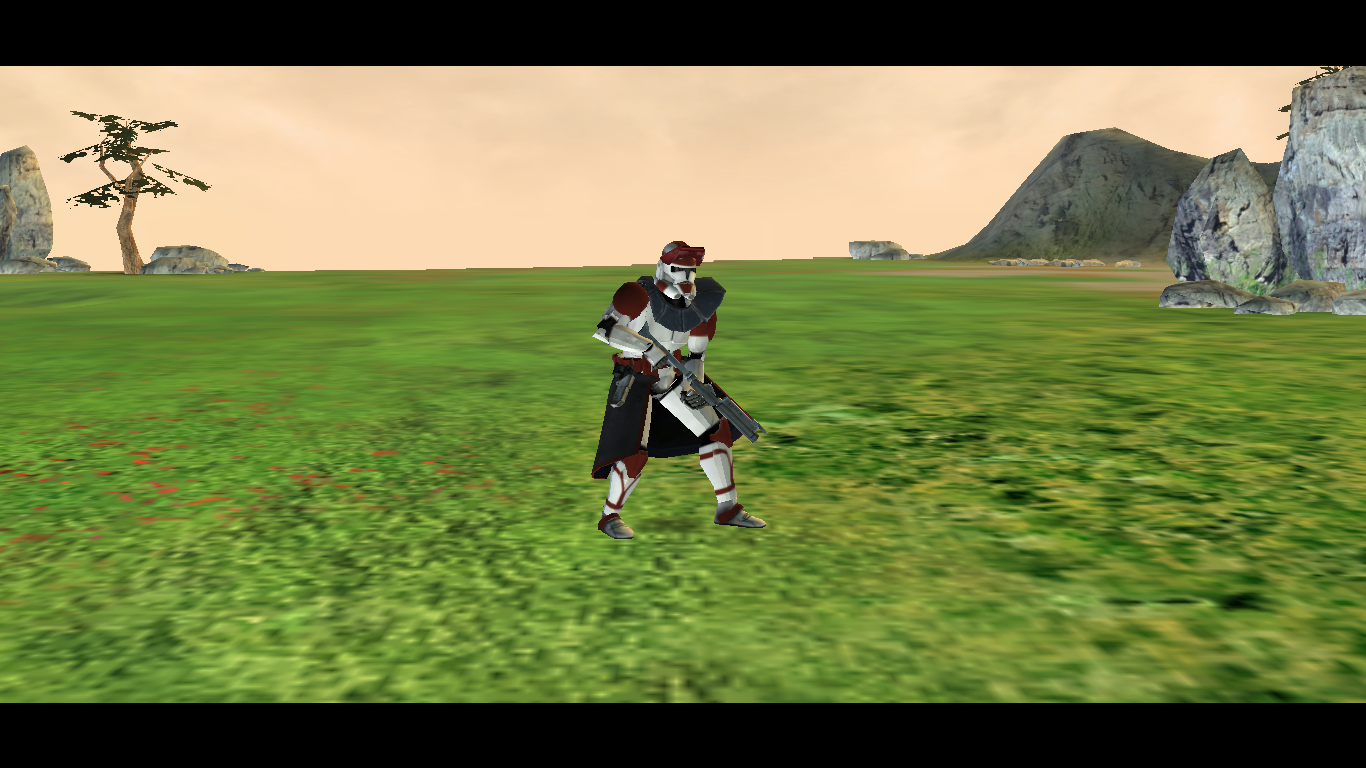 and the Phase 2 442th Commander 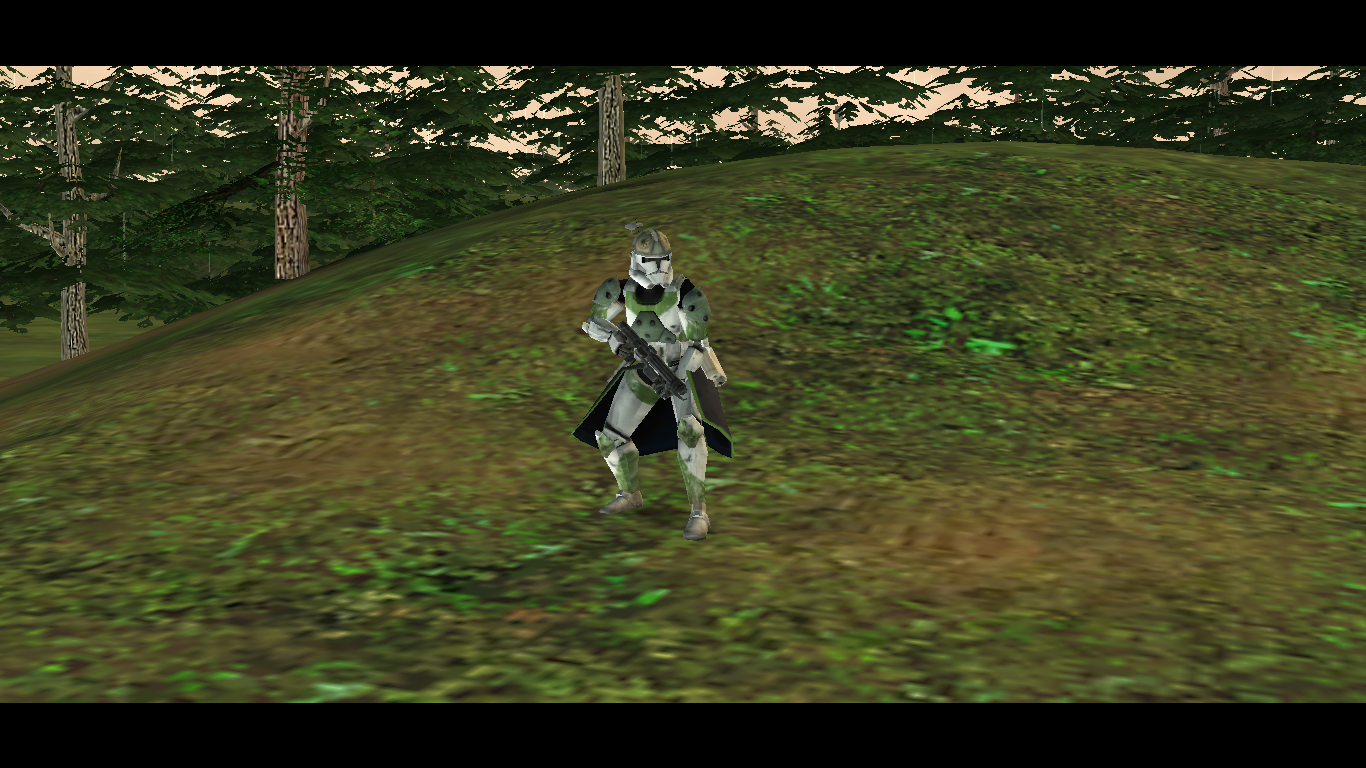 We acquired an unique model for the CIS, that I will rig very soon and show ingame :) 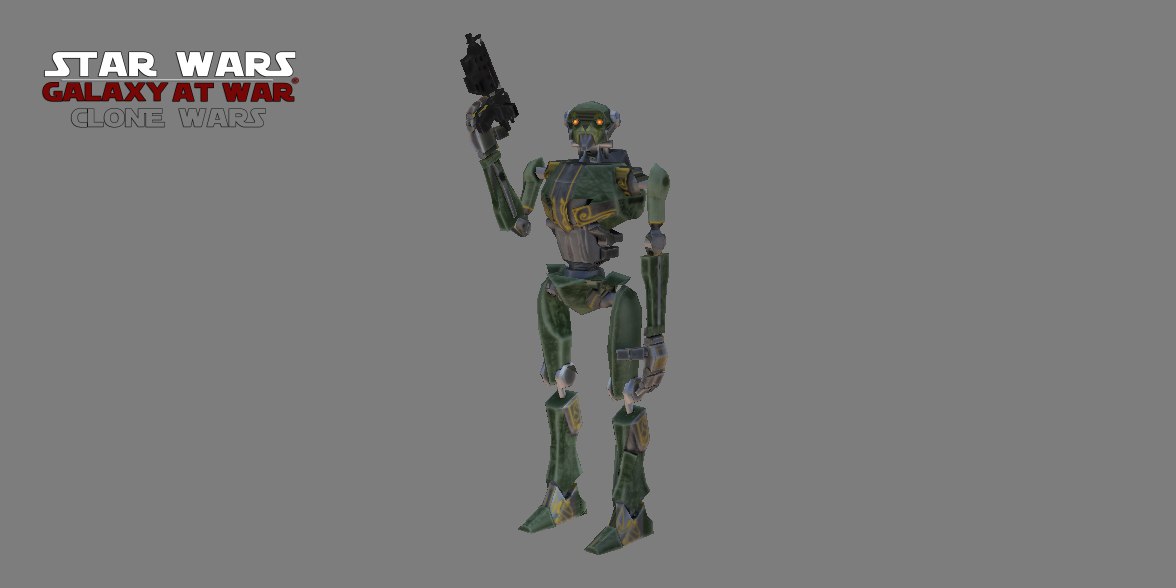 We added new member to Red Mist Squad - Axe, and I'm really happy to tell you that I've been in contact with the creator of the RMS - JoeHoganArt from DeviantArt.com and he was so kind to share with us the design of all the troopers in the squad, so we will make the whole team in the mod 100% acurate to the original. We will for the full release of Panic over Muunilinst before we can show them in the mod, but they will be there :) 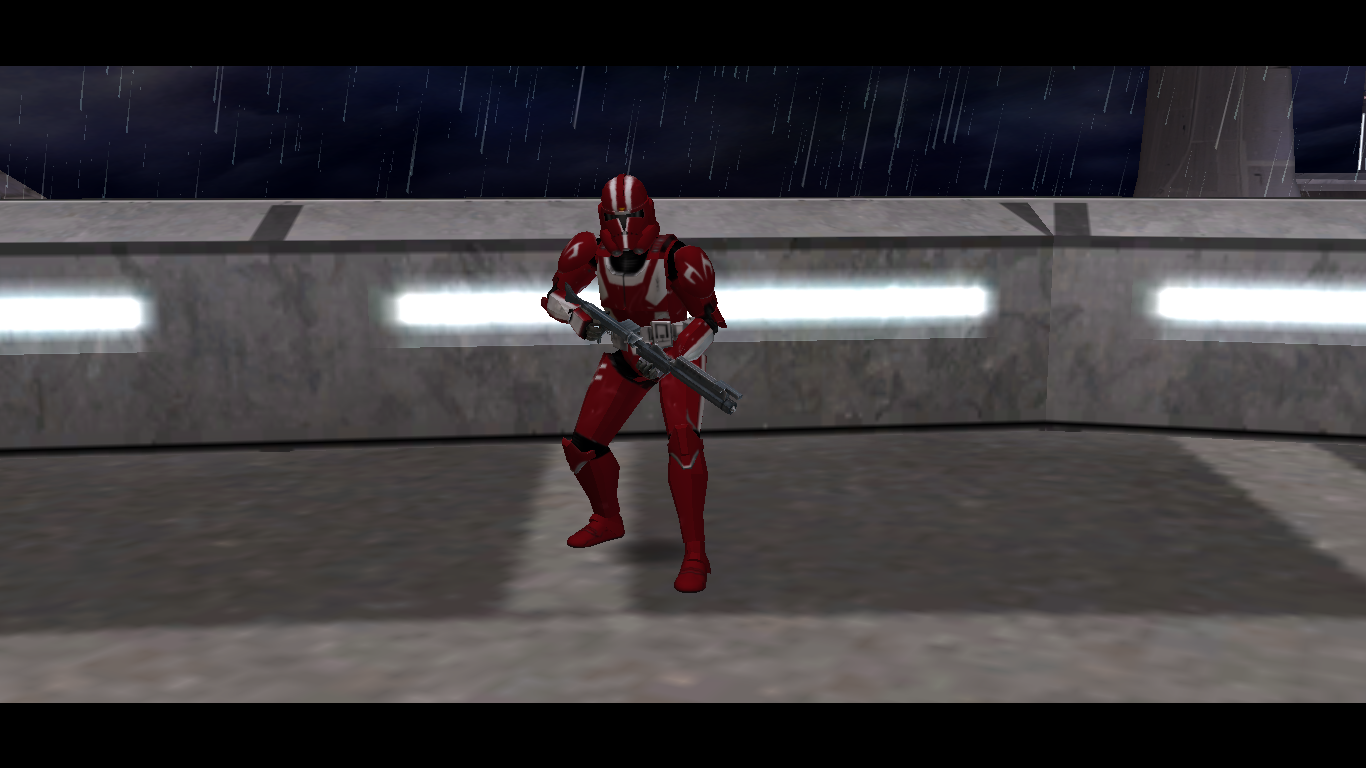 We added finally the Republic Commandos, the oficial Delta and Omega squads 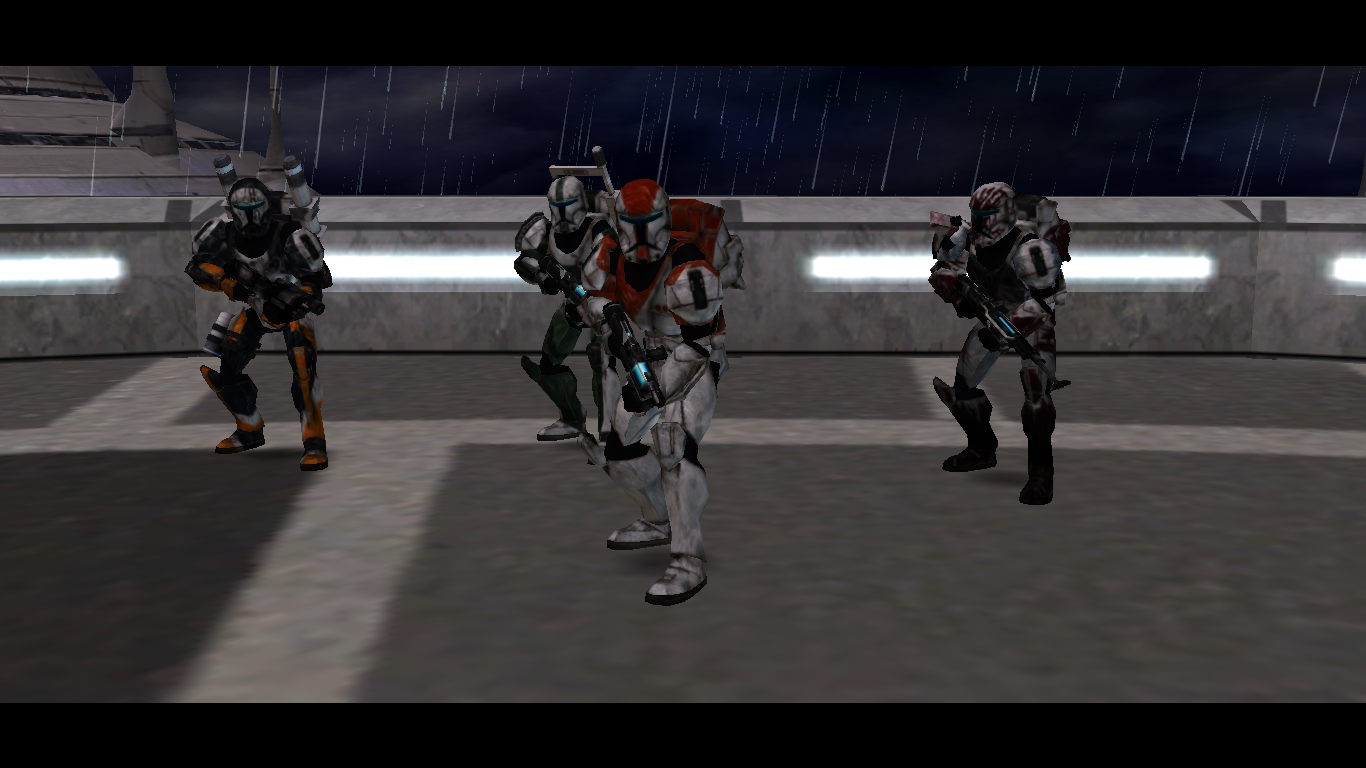 and the custom Tracyn squad ("Fire" in Mando'a), name choosen by you in the vote (Thanks to all, who participated) 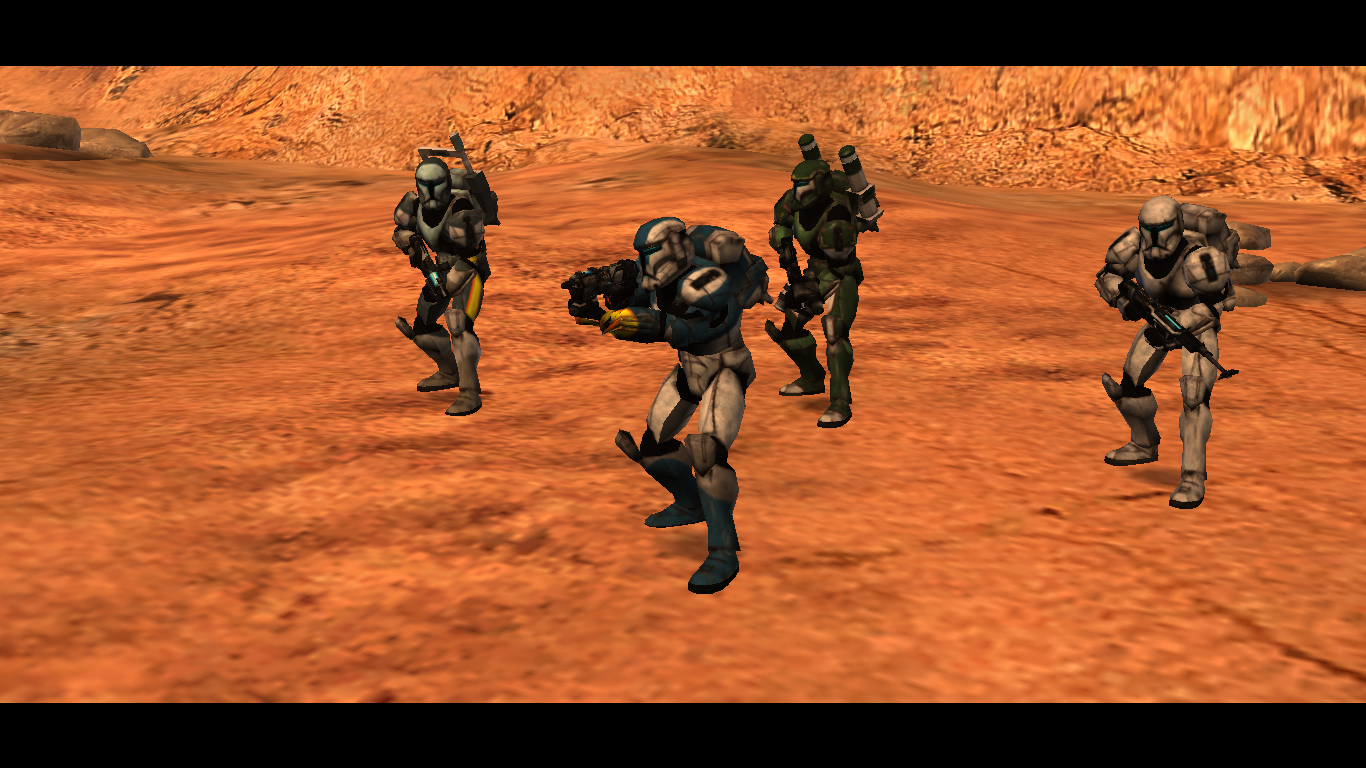 We continued with the last of the garrison units - the Senate commandos. They will be one of the units that won't be buildable but will be part of some special planets's defence. Other units like this one are the Kamino Security force or Phase 1 Rancor Battalion 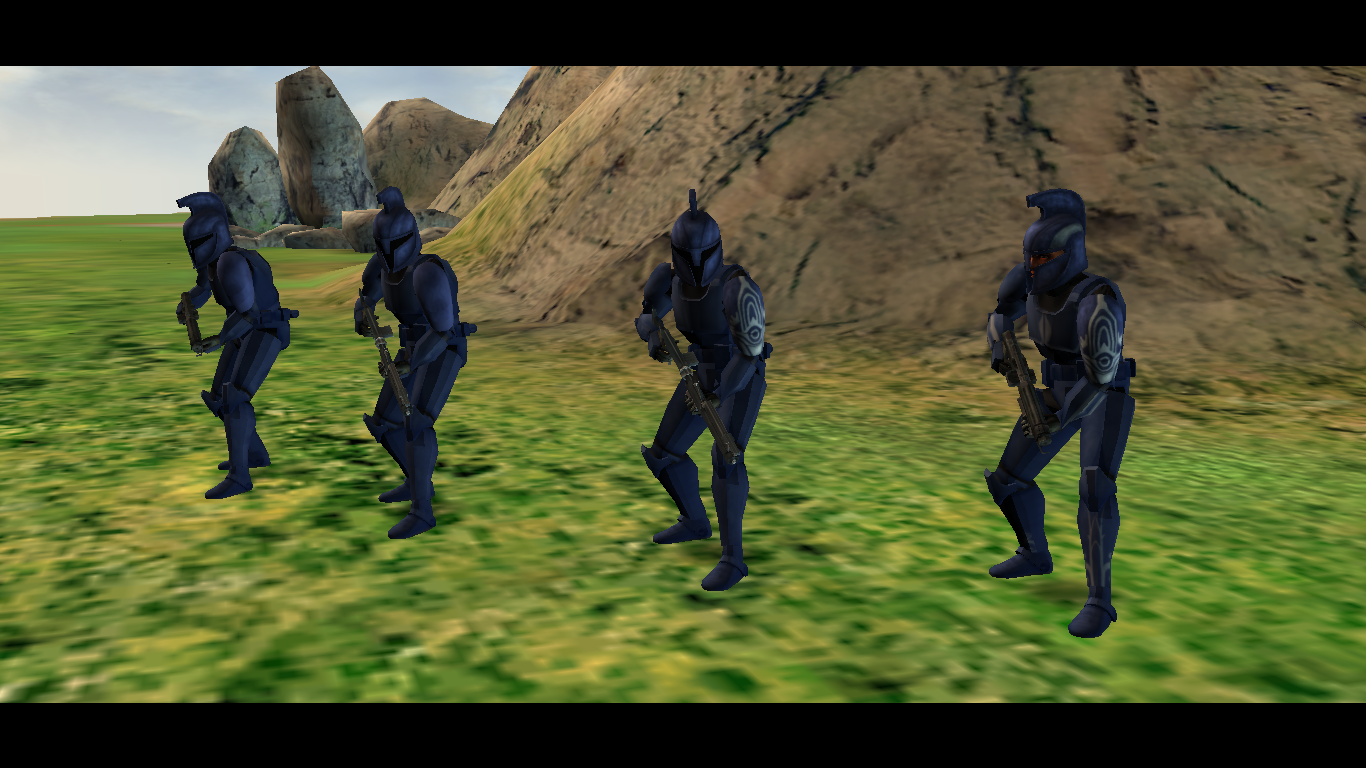 For the first time ever in EAW FOC - Mod DB 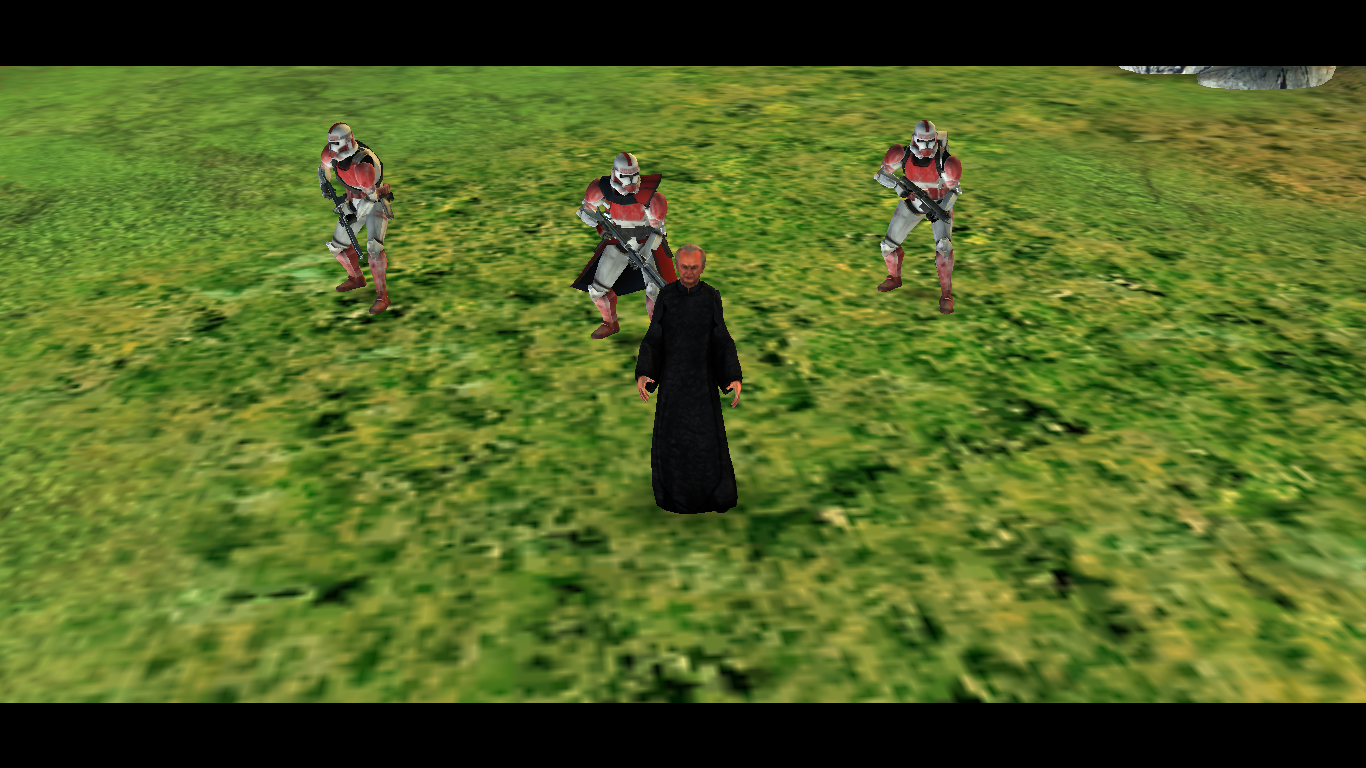 And we made the first steps in shaping the mod in our style with part one of the Republic's buildings(here). We are working on part two now and one of the buildings is ready :)

Well, I think that was most of our important work for the 2016, I really hope that we make better proggress in the incomming 2017 and I'm really sure we will have your amazing support. Support that helped us so many times and even reached it's top so far in this years Mod Of The Year contest, when you send us right in orbit with the incredible 3rd place in Players Choice - Best Upcoming Mod 2016. We are really proud of this achievement and it's all yours, not ours, so thank you very much.

So, this article is already long more than the necessary, so I wish you all on behalf of the entire Galaxy At War Mod Teamhappy celebration of the new year's arrival tomorrow! See you soon and don't forget to answer me about the FAQ :)

It's always so sad to look back at the past year ;_;

Yes, but at least we have something to look at :)

Very Great Job with the Mod so far. I hope to see more CIS models next year,(your B2 Model was Nice), since your Republic models were great. I do read your FAQ, and maybe you could put a answer about unit, planet, or other suggestions for the Mod.

Have a Happy New Year!

" maybe you could put a answer about unit, planet, or other suggestions for the Mod."
Can you please tell me more about what do you mean or give me an example?

Thanks for the reply, I mean if your open to suggestions for the Mod,(in the way if your interested in adding EU units,planets, or even buildings or do you want more canon items).

One question about the mod is will minor Heroes be returned to the Hero bar in Land battles like in the Original Empire at War,(it's a pet peeve of mine that Minor land heroes don't show up in battles in FOC, is there a way to enable it in Vanilla FOC through Modding?

How to do fresh Install of Empire at War on Steam, at Corellia it says Drall and Ackbar is smaller in Empire at War. Thanks


Also thank you for answering my other questions about the mod, I can PM some of my ideas if you wish.

We are always open to suggestions and you can PM me any time :)
I still don't fully understand your question. What minor heroes in what battles don't show up?

I mean the Field Commanders in FOC don't show up in ground Battles. I don't know if it's only me or something that can be changed for FOC. Thank you

Hmm, it's something with your game. I never had such problem. Any confirmation from others?

I should check thank you, I have taken screenshots I am going to upload to show the different things I have seen. I changed from the CD version to the Steam version, is there a way to do a clean install? I will make a list of some of my ideas to send to you, instead of commenting them. Thanks

I think the cleanest install is reinstalling the whole steam. But this will uninstall all your steam games on the computer. Ok, sent me everything in PM :)

You guys got a lot done this year! I think I can say for all fans for this mod is that we are really proud of the progression of this mod this year! It's all thanks to Gaw: Clone Wars modding team it wouldn't be possible without you guys!

May success continue for you, the mod and your lives.

I love the republic units! But I also do love, that you will now focus on the CIS because I am a huge fan of the CIS!

Now, I am a little bit disappointed about the acclamator model. It looks like right out of the TV series (which I love), which is good, but it looks kinda low reoslution. However, thats just because it isnt finished yet, correct?

Everythink is WIP befire release and can be changed at any time. I don't think this Acclamator needs texture improvement. You can't notice the difference ingame

Youre probably right. Its not like we play battles zoomed in to the last pixel :D

Well, we have to find the balance between that and the smooth gameplay

I'm so proud of the Tracyn folks :D
It's really nice to see all this progress. Goes to show that the mod was being constantly worked on.

As for the FAQ, it IS absolutely necessary IMO. Even if only for redirecting people. Believe me, some people do read the FAQ. It's fine as it is.

Anyways, looking forward to more news, especially the part 2 of the Rep buildings you mentioned. Which one did you complete anyway?

Patience :)
We prefer to announce it with the rest