Greetings commander! The long wait is almost over. I hereby bring you all the latest development update of Tiberium Refined, please enjoy!

First up are the major changes made to the Scrin construction mechanics. Ever since Tiberium Wars was released, players have been complaining about how despite being aliens, Scrin feels more like the human factions with a different skin. I fully agree to this sentiment, which is why in the latest version, I've done everything possible (without breaking the AI) to make changes to the Scrin so it plays differently from the human factions, such as: 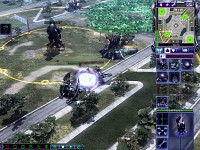 The Scrin Drone Platform will now spawn several Construction Drones (it is a "Drone" Platform after all) when built. After a Scrin structure has been placed on the ground, one of these drones will automatically go to its location to "activate" the structure. Compared to the old method employed by the human factions, this works more like the Nanocore system used by the Empire of the Rising Sun in Red Alert 3, which is highly suited for rapid expansions. I must say though, the Empire is the most micro-intensive faction to play in Red Alert 3, since you need to click on the building tab, wait for the Nanocore to be built, click on the core, click deploy, then select the location, which makes it 4 clicks if you want to build anything! To make matters even worse, you can't even queue multiple structures, which just adds to the annoyance. In comparison, the Soviets are much simpler to play as it only required 2 clicks for them to build a structure. Due to engine limitations, you'll need to go through 3 clicks in Refined in order to build, although this is pretty much in line with how it is in vanilla as well.

Incidentally, in order to prevent the issue where a structure is too far away from the Drone Platform for the drones to activate, the Foundry and the Outpost will now also spawn a smaller amount of Construction Drones as a backup when built, and the same applies to the Construction Drones summoned by the support power. In addition, Construction Drones can also repair ground and air vehicles just like in vanilla, which is to compensate for the fact that the Warp Sphere and Gravity Stabilizer no longer provide repair drones. 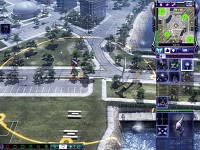 Apart from that, I was originally planning to have all Scrin ground units providing building radius, but for balance concerns, only the Explorer (the "mini-MCV") is able to do this in the current version, although it'll only provide building radius for regular structures (i.e. no defensive structures), and won't spawn any Construction Drones without first deploying it into an Outpost, which means you'll need to wait for a nearby Drone Platform to activate any structures you've placed. To cut down micromanagement and make it easier to deal with incoming threats, Scrin defensive structures don't need to be activated like the regular structures, although they cannot be placed around an undeployed Explorer either. 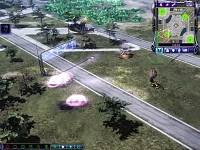 Onto the other changes for the Scrin: The Plasma Disc upgrade has been removed for Shock Troopers, their Photon Cannons can now target air units by default, and have received an increase in range, damage and suppressive power. Plasma Disc is now an upgrade for Seeker, Devastator Warship and Photon Cannon defensive structure. Instead of a straight damage boost, this upgrade will allow their weapon to deal continuous scorch damage for a longer time. Furthermore, Seekers and Photon Cannons now fire scattered shots, which makes them effective against groups of lightly armored targets.

The Scrin Plasma Missile Battery has been renamed to Storm Control Tower, and as the name implies, it will generate Ion Storm in its vicinity that buffs nearby Scrin aircraft just like the Storm Column (I personally think the Scrin has too many units and structures that use plasma disc weapons...). As a tribute to Tiberian Sun, Ion Storms now also have a chance to insta-kill any human air units. As for the Storm Column, it has been renamed to Thunderbolt Column, which while no longer generate Ion Storms, now fires a bolt of thunder that will spawn a lightning orb at the target location, which unleash several lightning bolts to damage any nearby enemy. 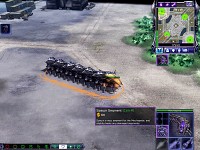 Added the Mechapede from Kane's Wrath. It serves as a fast harassment unit in Refined, therefore is slightly faster now. Due to coding limitations, the Spawn Segment ability is now a separate command, which also replenishes a small amount of HP to any damaged segments, while its weapons are now switchables between the Disintegrator Cutter, Plasma Disc and Toxin Dispenser. Unlike in Kane's Wrath, if the head segment was destroyed, the rest of the Mechapede would still remain on the battlefield and attack any nearby enemy, although you will no longer be able to issue it any commands. 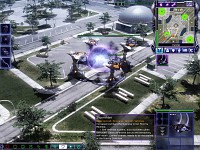 Added EVA and Radar prompts for the Stasis Chamber upgrade so players can know when to upgrade their Buzzers.

Units under the influence of the Phase Field now also gain 10% speed bonus. 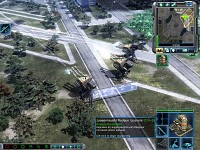 And I haven't forgotten about the human factions either! The GDI Juggernauts now finally have their long-demanded Railgun upgrade. You'll need to purchase the Railgun upgrade from the Tech Center, then purchase the new Juggernaut Railgun upgrade that's been unlocked. However, due to the stupid-ass engine, when you group select, the pre-upgrade Bombard ability commandbutton will replace the post-upgrade ability's, so I had to retain them both. As for Nod, the commandeer technology ability has been simplified: you can now direct target an allied vehicle instead of having to select it from the sidebar. Woe for any Nod vehicle gazed upon by the nearby Avatar...

As we've covered above, version 0.3 will be focused on changes and improvements for the Scrin. I'll release it as soon as the final debuggings are done. An early Merry Christmas, Happy Bald-prophet ascension Day, and whatever Alien holiday to you all! Please stay tuned for future updates when I improve the human factions!