I am presenting the final of the Fleet Ships today, and isnt this one hell of an update.

In this update i will show you the Renders from the remaining Civillian Fleet Ships. 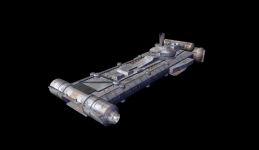 Description-The Celestra is a deep space science ship, designed to withstand long times without re supplying, its extra long range FTL allows it to take larger jumps than any other ship in the fleet, bar Galactica. 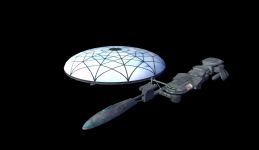 Description-The Cloud 9 is a magnificent vessel. The ship was primarily to hold meeting of the Twelve Colonies. The ship boast a quater mile diametr dome which contains a habitable garden. 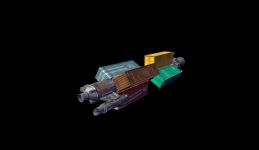 Description-The Colonial Movers vessels where part of a company of the twelve colonies. It is believed that up to 3 of these ships where part of the refuguee fleet. One was destroyed when the Cloud 9 was nuked over New Caprica. 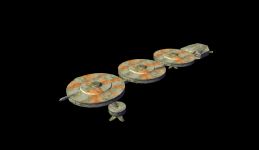 Description-The Colonial Miners where part of the refuguee fleet also. These ships where primarily used as the home of thousands of civillians in the fleet. It is believed that three of these vessels also escaped the destruction of the Tweleve Colonies. 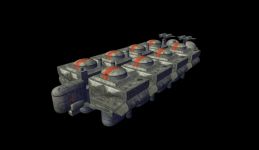 Description-The Colonial Refinery ship or otherwise known as the Daru Mozu, is a Tylium Refinery ship. The main purpose of this ship was to provide tyllium to the ships in the fleet. 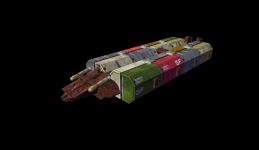 Description-The Gemenon freighters where used in the Colonial fleet to carry survivors from the Twelve Colonies. The ship plays great importance in the story as it is used to store cargo also. 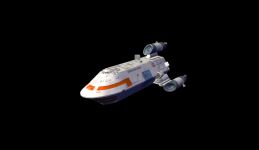 Description-The gemenon travller is a small but fast ship. A number of these vessels survived the destruction of the twelve colonies. 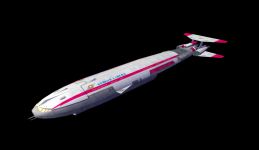 Description-Gemenon Liners is believed to be an operating company on Gemenon before the destruction of the Twelve Colonies. 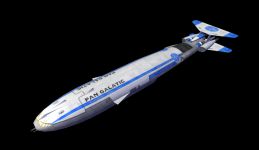 Description-Pan Galactic is also another variant of the ships used by the companies Coxxon Caprica and Gemernon Liners, it is also believed a number of these veseels survived the destruction of the Twelve Colonies. 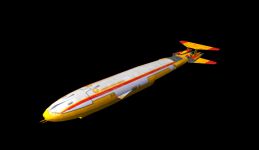 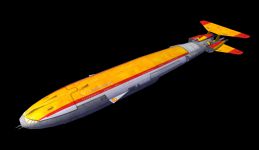 Description-These vessels are another variant of the ships used by Pan Galactica, Coxxon Caprica and Gemenon Liners. Again many of these ships survived the destruction of the Colonies. 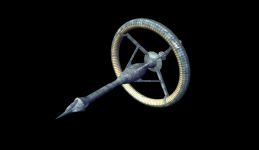 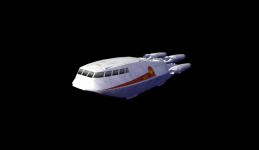 Description-The Colonial Shuttle was a transport used widely in the old days of the colonial fleet. It was later replaced by a Transport variant of the Raptor. 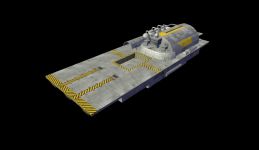 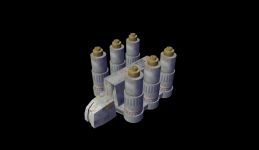 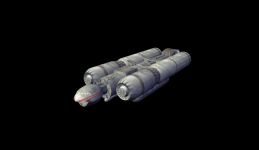 These unkown vessels are seen in the Colonial Fleet but have no refrence anywhere, i would grately appreciate some background information on them if anyone has any.

This Concludes the Fleet for now. The fleet does not contain a model of the Rebel Basestar or Demetrius as of yet, but i do hope to include these in the final release.

Coming Soon, and Update on the Cylons, we have some new ships and stations to show off for the Cylons.

In the meantime, visit out forums. We have recently set up a section at Alpha Blue Modding for the mod and would grately appreciate some publicity for the mod on the forum.

That Concludes this Partial Update
Thanks
Byron

For the unknown vessels, I believe the top left is called the Virgon Express and that it is mainly used for repair work.

although I do not know the other 2, i believe that they are civilian ships and that the one on the top right looks to be some refinery ship while the bottom one looks like a refueling ship.

Top right I would say is waste management. Bottom would be refueling or refinery.