Take an inside look at the Iris Mining Pod, your new home inside of the deep black darkness of space.

The vastness of space is home to many that seek to make their fortune. A plethora of some of the most advanced spacecraft scout the universe for resources. Their sleek, aerodynamic designs rocket into the abyss, and can return to the sector with enough firepower to defeat a small army back on your tiny blue orb.

Maybe if you are lucky, you’ll get to see one of them through your cockpit window.

Unfortunately you are stuck with this old bucket of junk. 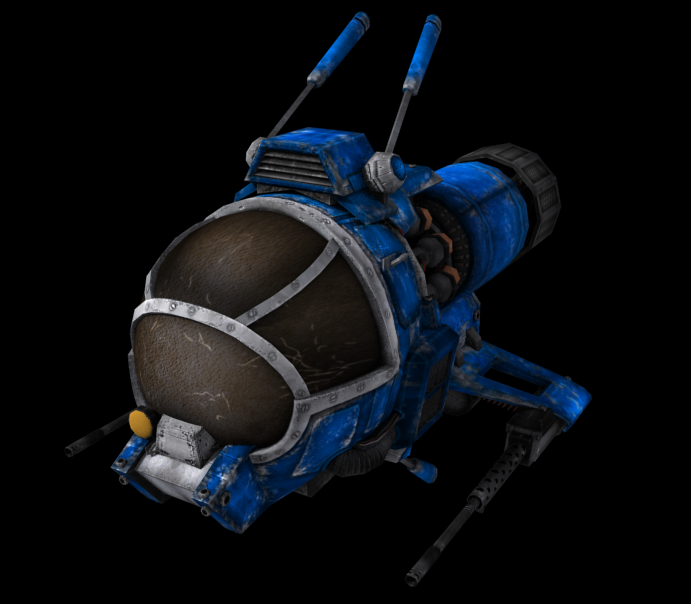 The Iris-Class Mining Pod began its design cycle within the inner chambers of the Tereshkova Bureau of Design as a mining pod, equipped with top of the line ore mining and collection mechanisms. Despite performing amicably in test runs, board members grew concerned by what was seen as a glaring oversight...

The pod lacked any noticeable mounts for weaponry, which led to the immediate ejection of the project design team. Ore drills were stripped away to make room for weapons, the cargo bay was filled with ammunition, and meteor armour was stripped away in order to make room for a wider canopy, in order for pilots to have a better view of their targets. Proud of their work, the Tereshkova Corporation immediately put their new Iris-Class Mining Pods into mass production.

The Iris is your basic combat pod. While it boasts nothing that makes it more interesting than its competitors, it is often regarded as a stable entry into the combat zone. Your ship handles a little differently than it would in most games.

Unlike most space “sims”, your engine isn’t just constantly firing and propelling you forward. You spend most of your time coasting instead. You use your Spacebar to fire your thruster, which rockets you in the direction you are facing. Your throttle allows you to manage your acceleration and fuel usage. The higher your throttle, from 0% to 100%, the faster the Iris moves. Be warned however, that higher throttles also consume more fuel. This means while it is fun to rocket into a fight at 100% throttle, it might not be as fun to run out of fuel mid fight and have your ship glide silently into the endless darkness of space.

Re-orienting yourself is also a bit different than in most games. Like in popular air combat simulator WarThunder, your ship will turn to face your mouse cursor at it’s own pace as you fly. The faster you move your mouse cursor, the faster the ship will try to turn to keep up, but watch out; you can incur the wrath of high G-forces by spinning too fast!

Do however note that you will not actually move in the direction you are facing unless you fire your thrusters, and you don’t stop moving just because you let go of the gas. Newton’s laws can be harsh, but they can be used tactically in order to create a drive by of cosmic proportions!