A summary of the differences between modern Therium-2 (Beta) and its shameful Pre-Alpha.

I’ve been working on this “total conversion” mod for quite some time (two or more years), so changes and revamps to the game are completely inevitable. For most games, this means a shift of style, tone, themes or concepts and often design concepts and ideas. Sometimes, games early in development will look absolutely nothing like the final product after a lengthy process of drafts, passes, rewrites and changes. Plot points will be removed, mechanics will be changed, and in some cases, the entire genre can change. It hasn’t been that extreme for Therium-2, but I certainly have made some extreme changes over time.

My mod, Therium-2, has been in development for two or three years. But I don’t exactly like to say that; it’s technically true, sure, but that span of time counts my development in pre-alpha, along with a nearly year-long hiatus thrown in the mix. 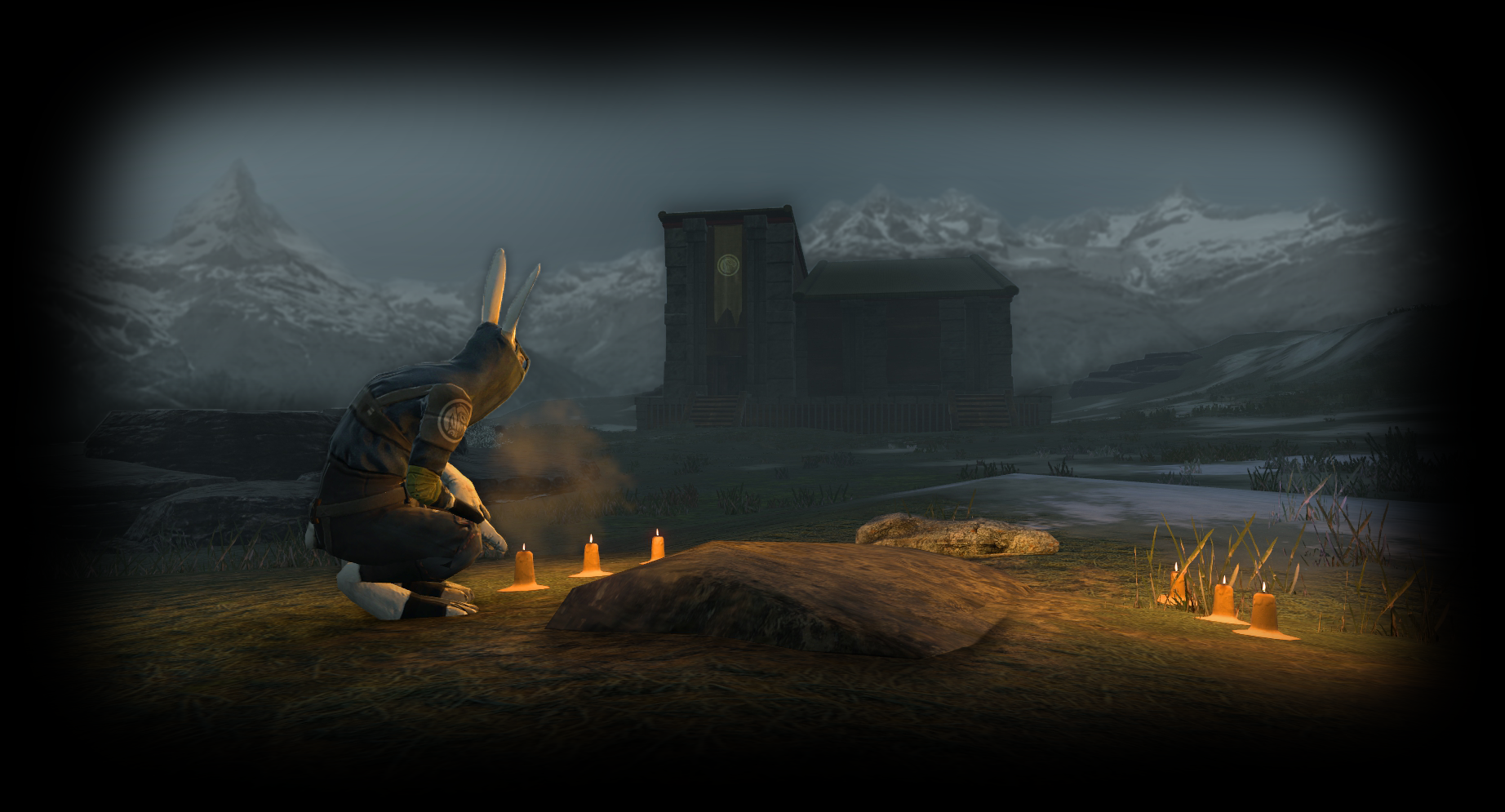 As you might guess, Therium-2 wasn’t always in this state. Oh, no, not in the slightest. Saying Therium-2 has changed a lot throughout development is an understatement.

There are six stages that I follow when developing Therium-2 that apply to not only the entire game’s progress to completion, but individual levels and assets, and I was stuck on a very specific stage of development for quite a while; Pre-Alpha.

Whereas Therium-2’s current release candidate is polished, playable, detailed and focused, Pre-Alpha was unpolished, unplayable, simple and lacking. The level design was messy, with a clear lack of thought put into it; the story was bent on an excuse plot with random plot twists thrown in here and there, and the general craftsmanship was just awful.

I am not exaggerating at all when I say I can count the similarities between Pre Alpha and Beta on one hand. It might as well have been made by a different person. 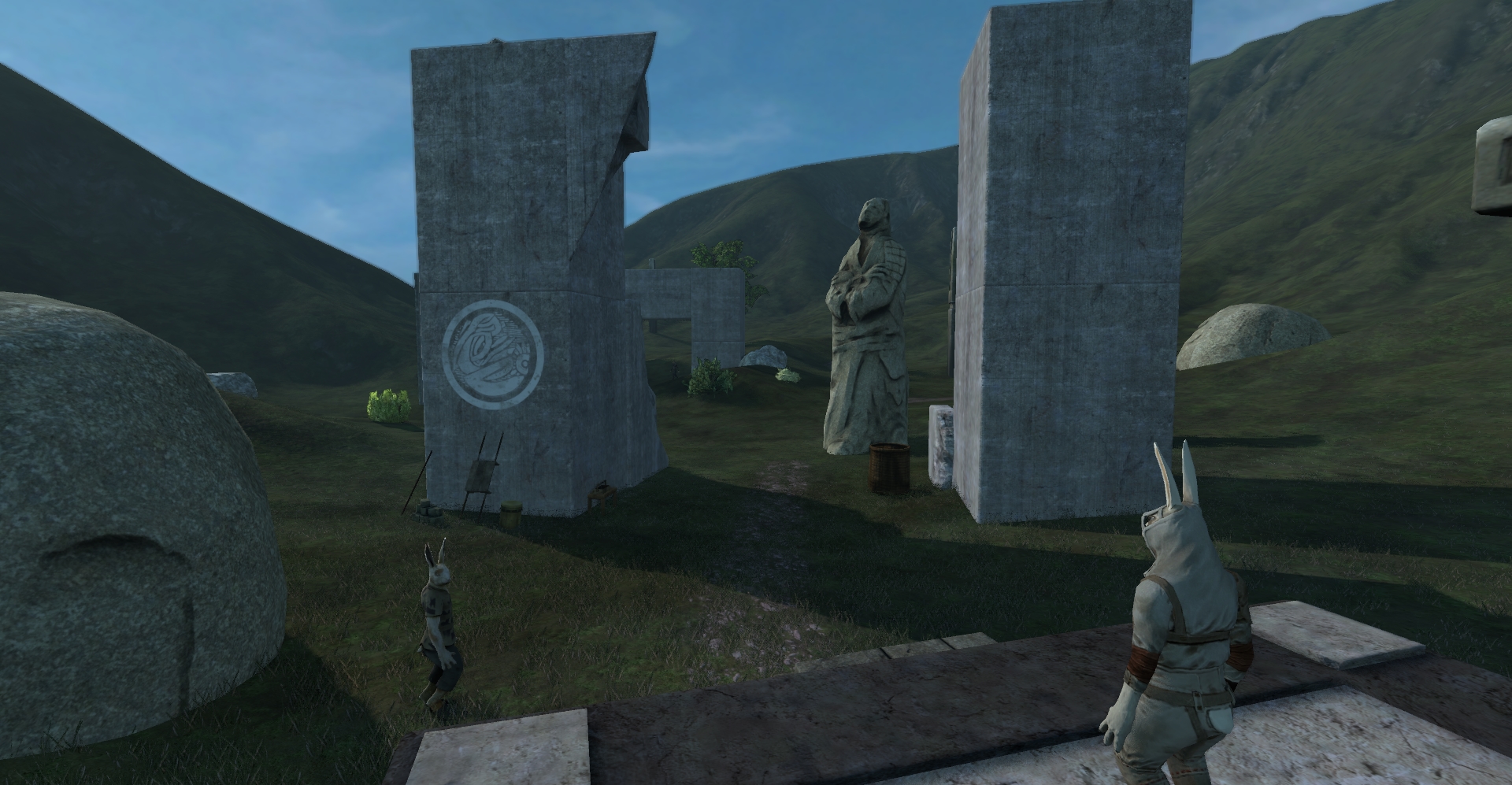 The only thing I would ever consider worth salvaging from Pre-Alpha Therium-2 is the very first level; unlike any of the other levels, it actually had a clear, consistent level design that, much like the Beta, encouraged stealth while allowing challenging combat. 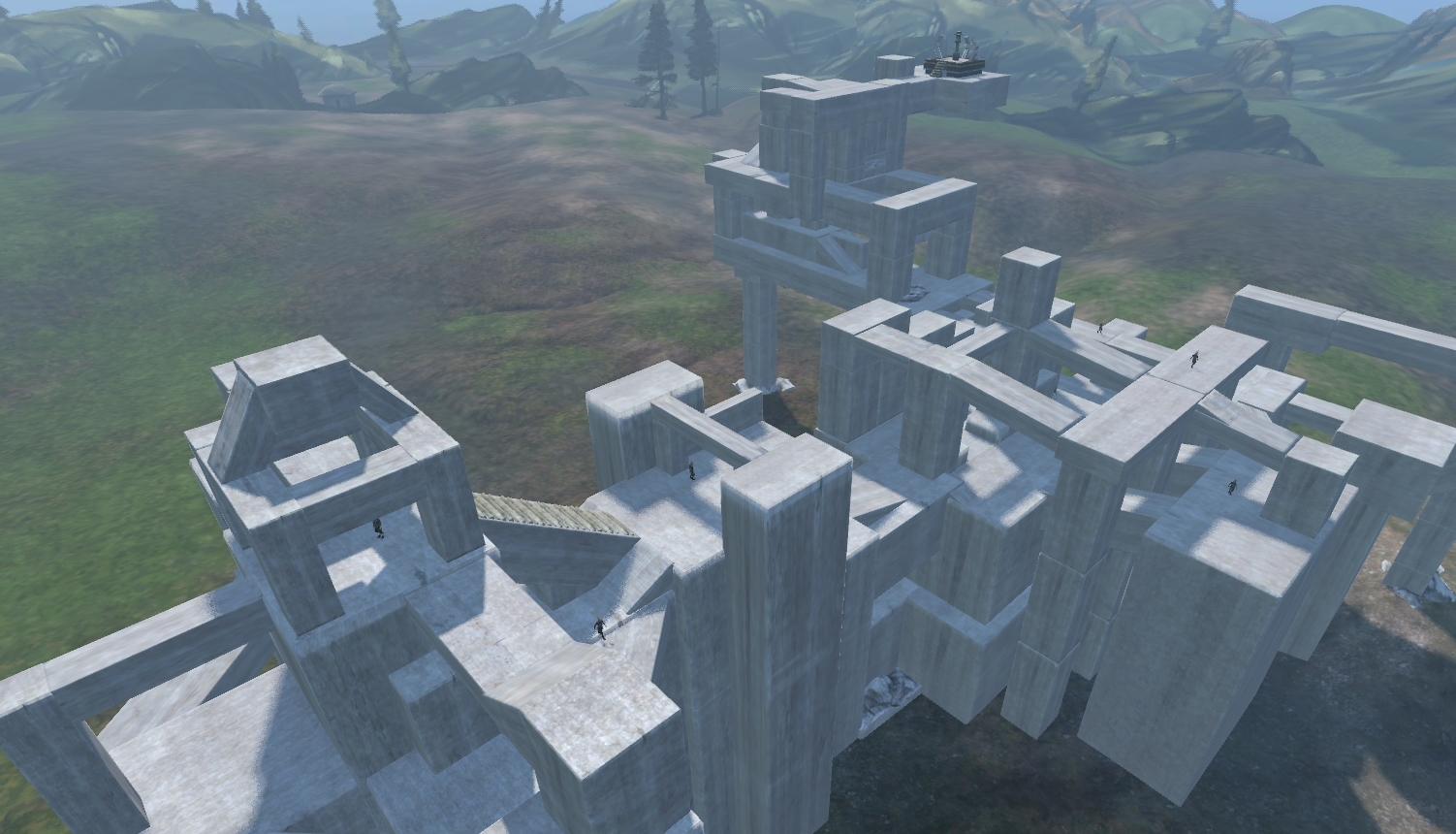 Sure, it looked terrible; the only textures and assets used were basic concrete blocks, but the functionality was there and it played well. You had to choose between stealth or combat, though the design encouraged stealth and careful tactics.

If I went back in time to that first draft, I would definitely keep the design and begin a new art pass and draft--but pre-alpha me was the one developing back then. So what did pre-alpha me do?

I continued working on that rough draft, without making a proper backup, filling it with so many random details that barely fit the level, along with a complicated script-heavy mess of a secret that mattered very little to the rest of the game. By the end of its development, the framerate (an extremely important number when it comes to game/level development) plummeted thanks to these changes, and the level felt significantly worse to play in general. I still didn’t realise what I had done to make the level play so badly.

The first level had something going for it; a couple things, at least. But the rest of pre-alpha was irredeemable. Not only were the levels ugly, but they lacked cohesive design, lacked proper narrative or storyline, and…

Oof… I haven’t even said anything about the storyline.

I previously stated that I could count the similarities between Pre-Alpha and Beta on one hand. That is not an exaggeration: there are only four.

The first similarity obviously can’t be revealed in this blog post. And though it’s still in the game, it’s changed significantly in many ways; in Pre-Alpha, that character’s arc was the largest plot twist, but it never actually ended with anything significant. If anything, it was just the most hidden and extreme footnote ever.

In Beta, the plot twist has been integrated much more seamlessly into the game’s plot and storyline, while adding to the character’s complexity and depth. It’s no longer a footnote; it’s an active part of the story, influencing things without entirely giving itself away.

The second similarity is potentially both the most embarrassing, and the most indicative of Pre-Alpha’s writing quality. The protagonist and player character dons a nickname for the entire game: Ghost. This name has a meaning behind it in both versions; Pre-Alpha’s backstory behind the title is shallow, implying that Ghost gives himself the nickname on the spot because of how silent and deadly of an assassin he is… but there’s another reason.

In Pre-Alpha, Ghost wore a white hoodie and had stark white fur. So of course, he looks as pale as a ghost. Therefore, as he attacks the enemy, they will get scared and think they’re being attacked by a ghost… even though they have previously arrested him, have taken note of his appearance, don’t have particularly superstitious beliefs when it comes to ghosts and spirits, and have no reason to be afraid of him.

Yeah, I said it was a stupid plot point.

However, in Beta, the protagonist is still named Ghost, but it’s for reasons that actually appeal to his character, and not the ability to scare the guards and attract some mystery machine. The nickname has roots in his backstory, from when he was raised in the Cinderbreathe slums and had to survive with scraps of food and petty thievery in order to protect him and his sister. By adopting the nickname for the situation he’s trapped in, it symbolizes him taking his old habits and behaviour once again in order to survive.

It’s not Shakespeare, but it isn’t the precursor to a rabbit themed Scooby Doo episode. And it certainly does a better job explaining his violent methods in gameplay.

On three: Both storylines have Ghost being imprisoned by the Cinderbreathe Empire to kick off the plot, and both are for somewhat similar reasons. On the surface, the plot gives no explicit reason for why Ghost is imprisoned, but it’s actually for a deep conspiracy that spans hundreds of years for political and cultural reasons that only become obvious by the time the game ends.

At least, that’s how Beta is. Pre-Alpha was, for lack of a better term, a clusterfuck.

So what resulted from this mad spree of remaking ideas one after another was multiple cut plots still remaining in the game, leaving a complete mess of dialogue, barely developed conspiracy, narmy and badly written characters and altogether bad ideas.

On four: Notes, like many other games, are scattered around the environment to give you tidbits of lore and information about the world. This usually includes reasons for why the Cinderbreathe are colonizing a certain area, details on how the ancient rabbits of hundreds of years ago fell to unknown forces, and occasionally disguised hints on gameplay.

This is still the same as Beta, though of course the writing is much better, more consistent and interesting in its subject matter. Not only that, but since the lore is so much more detailed and planned out, the quality of the notes is immediately improved. While Pre-Alpha had an excuse plot lengthened and exaggerated beyond repair, Therium-2’s beta has around twenty seven pages of lore detailing the creation of the world, the progression of culture in the Urista people, the evolution of the Cinderbreathe conspiracy…

That document reads like a college student’s notes on a history textbook, which probably means I’m doing something right; but it’s not even close to being complete. There are so many things I can detail and write within Therium-2’s history, like the in-depth history behind the Arliss Empire’s rule, how they came to be more powerful than the Cinderbreathe and the entirety of Preuwyn, the various dog clans outside of Preuwyn…

I can do so many things with Therium-2’s lore, so I don’t think I’m going to stop writing inside of it any time soon. 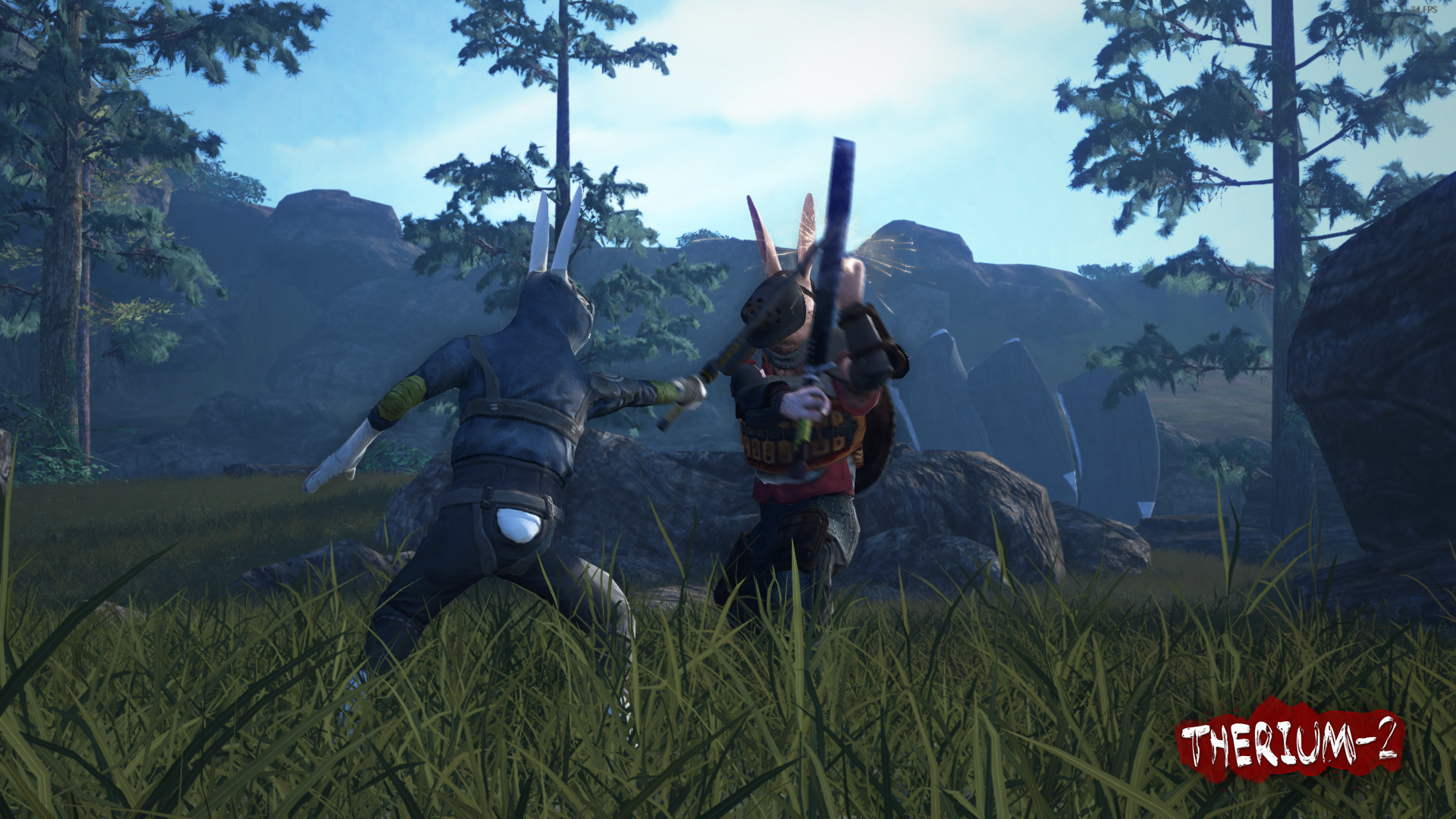 Developing Therium-2 is overall a great experience that has taught me so many things: for one, don’t develop an excuse plot without proper foresight. Don’t make a level without any proper focus on what you’ll want by the end.

But most importantly: Don’t get scared by the idea of starting something over. Even in Beta, I have had to cut so many different parts and remake areas into entirely new things.

The best part? After remaking a level, it has always turned out to be significantly better than it was before. Every single time I cut, change or revise something, the final result is an improvement. If an idea doesn’t work out, I can simply revert the changes to its previous state thanks to Git. I can always make compromises, and I can always figure out a way to fix the problem I’m facing whether it be creative or technical.

Which is why I’m looking forwards to releasing Therium-2’s A and B paths; because not only can people play them, but because I can initiate development on even more levels, story and expansions for Therium-2 and its lore. 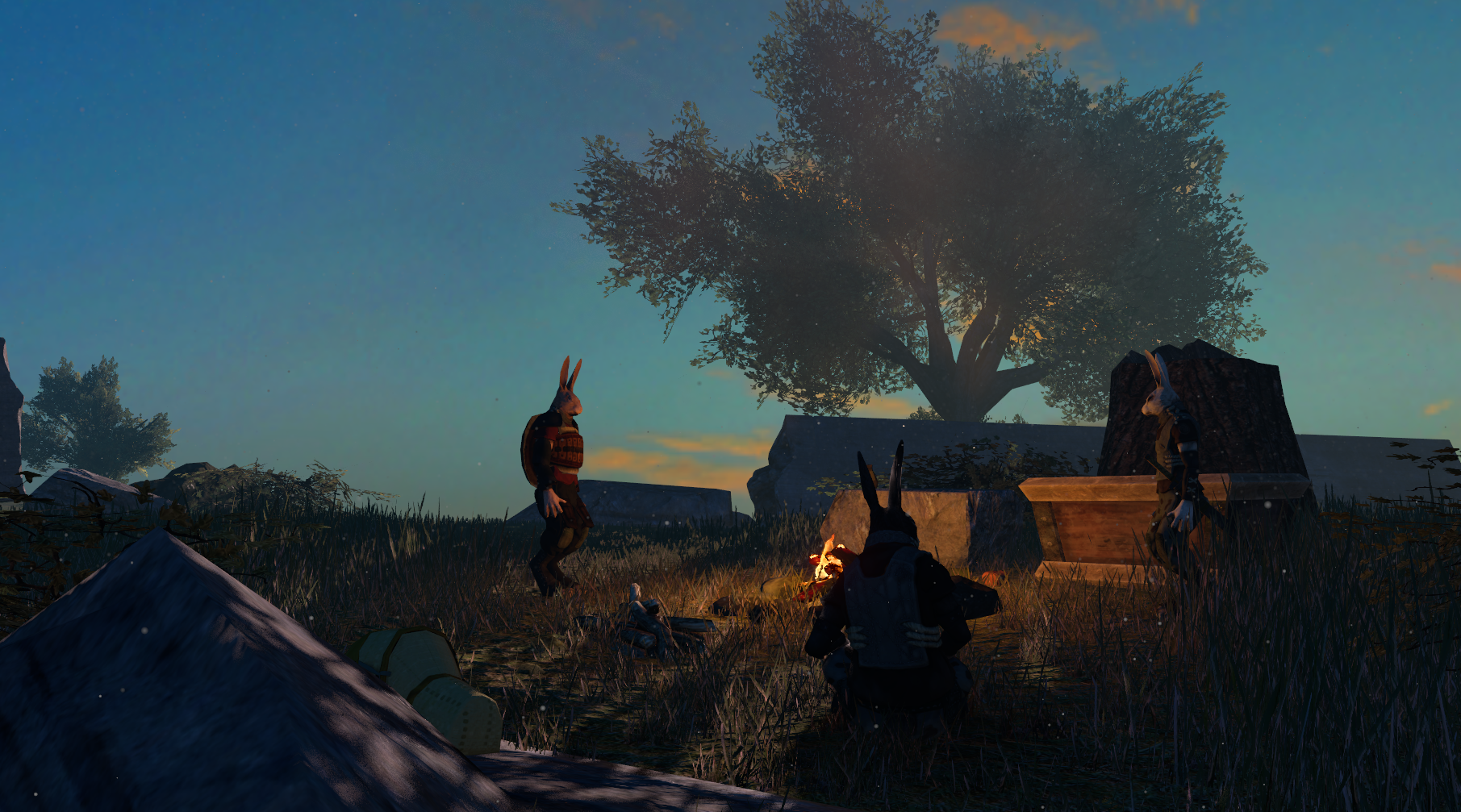 Especially compared to Pre-Alpha, modern (Beta), Therium-2 is mostly satisfactory to my standards of quality. The dialogue cutscenes are how I want them, the gameplay is fine as far as I can tell, and the storyline and lore is up to snuff. Visuals are good, audio is satisfactory, and the plot is as hole-less as I can make it.

What I’m really excited for is the improvement and expansion that will be done for Therium-2 post release. Levels will be changed, plot points improved and added on multiple patches: By the time Therium-2 is “completed”, it will be almost completely different from what it was on day one (and in a good way).

Over time and even after initial release, Therium-2 will improve, change and shape itself for who knows how long. I’m even planning on releasing materials related to its “expanded universe” like short stories, mini-campaigns, videos or even comics. These can give a deeper look into the universe, characters and societies that take place within or outside Preuwyn.

For example, the desert region nicknamed Ouran east of the Cinderbreathe dominated half of Preuwyn is an untamed, wild land. Plagued by cold, lack of water and sandstorms, cicadas the size of entire houses burrow deep inside the ground in a forsaken land hospitable only to bandits trying to throw off whoever’s looking for their tail. Any city located in the dunes have to be shielded from the harsh winds, and every seventeen years, everyone has to escape Ouran lest they get torn apart by the pure power of the cicadas’ cries.

It’d be incredibly difficult to show in the Overgrowth engine, but in a book or comic, it’s easily possible. Some things are harder to pull off in 3D, and for times like those, it’s good to rely on the written word.

I still don’t have a specific release date, but I know it’s coming soon. All that needs to be completed is beta tester feedback for each level, which is ultimately up to the beta testers in T2-Dev to complete. In the meantime, I’ll be improving Therium-2 with every passing day. Once feedback rolls in, things will be fixed and changed accordingly to carry Therium-2 closer to the release date.

I'll see you all then. The date is coming closer and closer, and I'm certainly feeling it.