As some of our community are aware, a field trip was recently run for the PR Sound Dept to spend a week capturing UK Vehicle sounds. The chosen location was the Armour Centre in Bovington. We managed to capture 20 vehicles in total (covering hatches, firing, doors closing as well as various engine sounds), and were joined by BISimulations for the trip.

One of the things we are keen to ensure accuracy on are the British Forces soldiers, which has caused us to run over our expected timelines. The move across to OA means a lot of config changes and some heavy optimisation is being carried out. Although work is slow, it is ongoing and will be worth it in the end, as optimisation for PvP is paramount.

As some of our community are aware, a field trip was recently run for the PR Sound Dept to spend a week capturing UK Vehicle sounds. The chosen location was the Armour Centre in Bovington. We managed to capture 20 vehicles in total (covering hatches, firing, doors closing as well as various engine sounds), and were joined by BISimulations for the trip. More info about the trip, as well as lots of media, by clicking on the image. 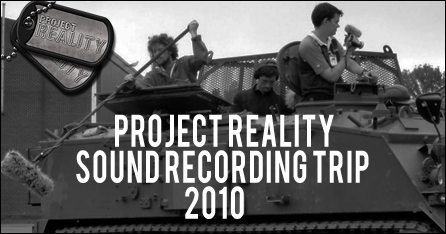 With over 80 GB of data captured, the Sound Dept need to now run through Post Production, and editing all of these sounds. This will take time as we are sure you can appreciate. You can be assured however they will find their way into PR:ArmA2 once they are ready. In the meantime, a small preview of initial testing carried out on some of the raw files (no where near the final product, and still very WIP). Initial testing however shows the potential of what great sounds can do for immersion these can be heard in the following Testing videos. (Note we have not implemented the Sight patterns either at this stage).

We are already planning the next trip, which will involve the team coming back down for another week, to record UK Small Arms (held on Live Firing ranges). All these sounds will be copyrighted under realitystudios, a commercial branch of Project Reality.

As we have stated before, we intend to release PR as a complete installer package. One which you can simply install via its own single installer, run with the shortcut provided and instantly join in a Project Reality server, much like the current PR:BF2 system. In this way we can control both client and server files to ensure they match, leaving players with minimal worries about which version they may need. Each release or patch will again be much like PR: BF2 to keep the continuity between the server/client files. We will however provide an additional install package in the form of a compressed file, to manually install, for the users who prefer this method.

A PR:ArmA2 PDF user manual will be provided with every install too, so players can get a better understanding of the dynamic gameplay. This way we can cater for all manner of players, whether you're an ArmA 2 veteran or new to the game.

The Project Reality Team are still actively recruiting. We are currently seeking a Static Object Modeler to build upon our PR objects pack. Of course if you have any other skill within ArmA2 and would like to help out, please don't hesitate to contact any of the team, or email [R-DEV]UK_Force. Whatever your skill, let us know. We are always recruiting.

As you can see, there is a lot of development still going on in the various development areas, albeit behind closed doors, with a lot more still to do. Stay tuned for Part 4 in a few days, and the final chapter in our Highlights Reel Special!

Wow, I don't have ArmA 2, but i'm pretty sure this mod will rock :O
And btw, sweet sounds, great work!

Me either, but i am so buying it for PR!

I already had Arma2 but I'm buying OA for PR.

You'll want to buy Combined Arms, which is Arma2 + OA. Both will be needed for PR and it's cheaper to get them together.

Yea, i just bought OA for PR. as xX said, the sounds are pretty darn good