Christmas is the time to give gifts. This year the Praetorian Mod team provides a beta release as a small gift to the DoW community which patiently awaits the many mods still in active development.

It took some time but I am proud to announce the release of the Praetorian Mod!

The Praetorian race is in a solid state and can be played with and against with a fully functional AI.

Currently it is not compatible with objective points mod and thus if you play against other race mods it will not present the correct behavior on the praetorian banner. This is one of the reasons it is a beta.

There will be updates in the future which should solve some of the known issues but nothing significant.
Art assets should remain mostly the same so likely there will be no new units but rather bug fixing and possibly balance efforts if required.

Enjoy this mod and have a Merry Christmas and a Happy New Year!

Credits are available in the mod page summary and in a file included with the mod but since their work was so important they deserve to be refered here also :)
Some credits related to the alpha version off the mod by Tempest and are kept for historic reasons.

Credits:
Tempest - Original Mod creator, a lot of the models and buildings. Many thanks to him for allowing the assets to be used in order to get this mod completed.
Compiler - OE and Animations for the Turret
Zany_Reaper - Shadowsword
Medes - Leman Russ Exterminator (Leader Tank) -- currently replaced by the Senior Officer leman russ
Havoc - Venerable Dreadnaught
Titlams - Teamcolour
Hanger-8 - Banner/Badges
T'omm T'royy - Banner/Badges
Abriael - Banner/Badges
Kjon - Chaos Tank (Looted Ork Predator) -- currently replaced with the improved Looted Leman Russ so credits provided mostly for historical reasons.
FoK mod team - for the models used in several of the conversions
RT2 - conversion of some Praetorian units into FoK guard units, several model concepts, fixes and body synchs for some of my conversion concepts
deathwatch78 - for some work on the improved looted leman russ
ombrephenix - for the UI, textures and model improvements (including 3D work and OE work)
gerberman - for some fx
Promythyus - for allowing us to bring back life to this mod page after he had to leave modding
thudmeizer - for overseeing the recording of Praetorian voices
goldenhorde - for his help with Praetorian background
fuggles - for some scripts for Afriel units, useful suggestions and overall balance and tech tree development. Also last minute AE work, AI tweaks, UCS and 2d stuff - Anything bad is likely his fault. Why in the emperor's name did he have to get involved?
jONES1979 - for some help, advices and suggestions
Gambit - for some suggestions, ai work and other fixes
Shodar87 - for some suggestions
GreenScorpion - AE work, some kitbashes and minor OE work. Without his input there would be no mod.
Kasrkin84 - Bug fixes, testing
Faceless - testing
Genin32- for is Improved Water Textures mod.

Anyone else who made suggestions, comments and overall provided useful feedback and is not included in the above list. 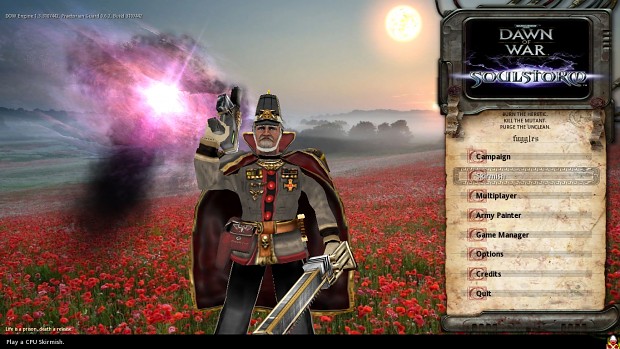 Thank you and merry christmas :D