Our first activity for the Rationality group, I present... THE GAME OF DIPLOMACY. 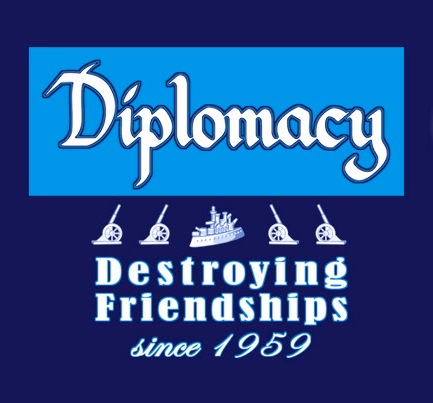 There was recently a post on Less Wrong, a rationality blog I've followed for some time, explaining how the old Avalon Hill game, Diplomacy, is basically a simulation system for game theory, which is a large part of practical rationality. Having played Diplomacy in the past, I realized how true this is and so I come with a proposal.

For those who are curious, Diplomacy is basically a turn of the century war game in which players take control of a European country and proceed to make alliances, betray and backstab, and otherwise do bad things to each other. Due to the unique structure of the game, it wholly encourages lying, misleading and fooling each other, and playing each other as much as playing the game itself. It is unique in that it actively casts the players in the role of "selfish rational agents" and thus creates frequent instances of classic game theory, such as the True Prisoner's Dilemmas, which is rarely seen in true form in real life. I think running a few games and then analyzing them afterward would be a great way to learn game theory and put it to the test.

There are ways of running free online games of Diplomacy, so I'm wondering; is this something we are interested in? Does anyone have a preferred time to play it? (it can take some time to play) Anyone played it before and have stories to share?

Never heard or played it, but I might be willing to give it a try.

Lying and deceiving is practical rationality?

Kinda but kinda not. Game theory is a subset of rationality dealing with the way people interact with one another and on making the best choices to suit your goals. To quote wikipedia; "Game theory attempts to mathematically capture behavior in strategic situations, or games, in which an individual's success in making choices depends on the choices of others"

Practical game theory is basically both the sort of thing you'd learn to run a con or to prevent being conned, or what you'd use to predict the behaviors of people in certain situations. It's no more Bad than technology is Bad; you can use it to protect yourself and others just as easily as you can use it to screw others over. It's also the foundation of ethics; you determine which result is more ethical in a Game so you know which one you need to encourage and can start figuring out how.

If you take the Prisoner's Dilemma, for example, (http://en.wikipedia.org/wiki/Prisoner's_dilemma) which has proven time and time again that people will defect even when cooperating will net them both benefits, we see that the fundamental drive of ethical systems is to prevent or discourage defecting while enforcing or encouraging cooperating. For example, the reason that governments exist, basically, it is to punish people that defect in everyday society; if there was no law, then two neighbours living next two each other would be presented with the choice of stealing from the other or not, and they would both steal because if they did not steal and the other one did, they would have nothing, but if they both steal from each other, it evens out. Government is tolerated and encouraged by people who want to prevent that sort of defection.

Religious ethics is similar; you are told that by cooperating rather than defecting, you will be supernaturally rewarded with eternal happiness or reincarnation as a higher being, and by defecting you will be supernatually punished. The idea is to use the threat of a tallying up of defection vs cooperation after death as an enforcer.

The benefits we will see from the Diplomacy game isn't from the lying and cheating in itself. The idea is, after each game we will analyze our behaviors, see why we did what we did, decide what we believe to be immoral, and come up with means of enforcing it. Multiple games with the same group inevitably lead to less choatic games as time goes on, because the micro-society of those playing will being to self-govern in an excellent demonstration of game theory.

I'm also up for a game. Name the time!
I'm quite interested in Game Theory, despite the fact that I only learned the name and its concepts at the start of this article, it seems I've been pondering the concepts for quite some time without having actually known the term.
I don't mind, I'm just glad that I'm not the not the first person to consider such things.
It seems that aside from being a rationalist, I'm also an idealist. (Interesting combination huh?) so I've always thought more along the lines of "if we all cooperated then we would all benefit".
I suppose we are simply not at the point where we can do this without a government to enforce it or religious promises to entice us.
Which is sad seeing as how it's completely possible,...
Would it be to rash if I were to blame the cut-throat nature of the economy in the world we have been raised in?
And yet there are people like myself who seem to remain unaffected... strange.
I can't wait to try to play a game like this to test myself!
The only problem I can see is this:
Since we know it is only a game, will we not resort to whatever measures we deem necessary for victory?
In other words, how we act when we play the game would likely be different from how we act when we are dealing with real-life scenarios... although I can't be sure given how little I know about the game.

Diplomacy was one of the funnest games I ever played....I think.

Me as France openly allianced with Britain and plotting to attack Germany, while secretly backing Russia who was going to also attack Germany, and then getting attacked by Italy and Turkey.

Best game ever, because it turned out Britain was allied with Germany but Italy and Turkey went unnoticed making them able to take down Britain and then pretty much sweep up. Good times, good times.

"Democracy is the worst form of government apart from all others that have been tried." Winston Churchill.

If you can get a link to one of those free online games of it I'll give it a go.

Rationalists of Moddb Educational with 23 members