Our very own Danish programmer “Michael R. Schmidt” is scheduled to hold a speech at this year’s UNITE conference in the country of hockey and maple syrup. 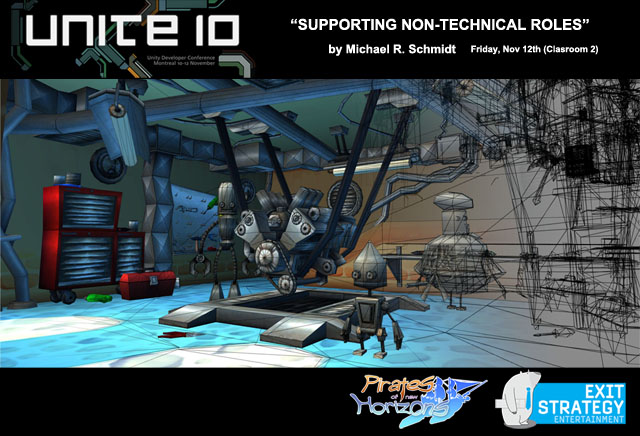 O
ur very own Danish programmer “Michael R. Schmidt” is scheduled to hold a speech at this year’s UNITE conference in the country of hockey and maple syrup.

The conference is an event for anyone who’s interested in all things Unity, to network and to learn from each other. Michael’s talk is titled “Supporting Non-Technical Roles” meaning he will be talking about our relation between design and code and how we have handled the development of the PONH prototype. Michael prepared the talk with technies and non-technies in mind so there is going to be both technical stuff (about the way our code is set up allowing Soenke to do gameplay stuff without a coder) and more general information on how we work, what our plans are etc.

If you don’t already know, the conference will take place in Montréal this week, from Wednesday Nov 10th to Friday Nov 12th. Michael’s talk is scheduled for Friday, 11.30 am in classroom 2. If you attend the conference, don’t miss out on this opportunity to shake hands with Michael, give some feedback or ask questions. In case this doesn’t excite you enough yet, the top-notch game designer and lecturer Jesse Schell is going to deliever the event’s keynote and the 2010 Unity Awards will be presented during the conference, too.

For all the other Unity developers who cannot go, we’ve got a small treat lined up, that is going to be released simultaneously to Michael’s talk. Stay tuned! :)

Could you post it somewhere for me to watch? It sounds interesting, but I won't be attending.And good luck with the speech, Michael!

We should be able to upload the presentation to slideshare (or a similar site) afterwards!

Great, looking forward to it. Thanks guys