This is a selection of renders of the magic user factions caster (or the player character). 3 renders are taken using 3D studio max's default shaders (the 3 perspective shots). the last shot (of the caster from front side and back) was taken using a directX shader in max (this was just done so people can see how it will look a little more in game, but obviously the UDK shaders still differ a lot form the one I used in max). this shader however can not be rendered out and thus is was not used for beauty shots (even tho it looks much nicer in my opinion, although it does not displat the emit map very well, where as UDK shows it off as it should be).

The textures were created in photoshop from a mixture of ambient occlusion maps and normal maps baked down from a high poly mesh made in Zbrush (although there was not a lot of Zbrushing done, it was more for finer details as the approach to the art for the project does not require UT super bumpy stubbly men).

Obviously the colors have changed significantly since the from the blue concepts, I felt that the blue just didn't fit and was to much of a calming color, I feel the purple gives him a lot more presence. there is still some tweaking to be done but for the most part the its pretty much there. as soon as hes rigged and weighted he will be going in to UDK. 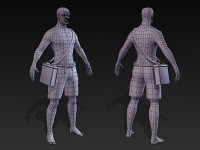 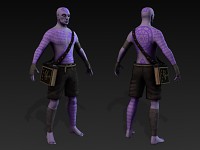 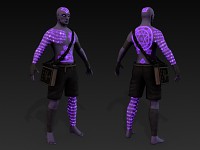 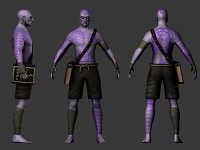