Come join us every sunday from 7PM GMT onwards for the finest scifi smackdown the world has ever witnessed. 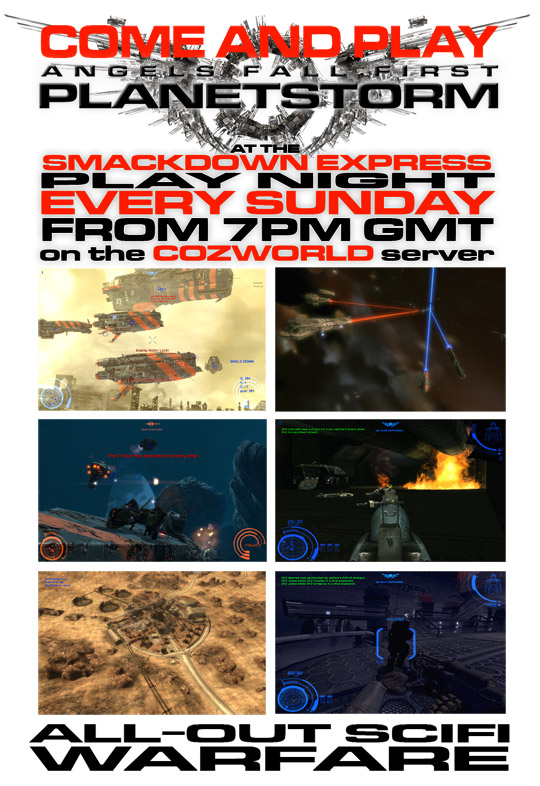 Many of you have moaned about having nobody to play with. The answer is simple! bring your friends!
We play a regular playnight every sunday from 7PM GMT onwards, and with the new RC8 release its better than evar! At the very least we, the dev team, pledge to be available to shoot in the face every Smackdown night.

For the uninitiated, AFF:Planetstorm is a scifi FPS shooter combining the best features of BF, COD and QW with the awesome innovation of being able to crew and operate massive capital ships in full first person. Fight in Space! Fight on the Ground! Shoot, Snipe, Defend, Attack, Roll out with tanks or take a dropship and go board the enemy's flagship with a squad of marines! its up to you!

Choose from an awesome arsenal of kit, weapons, vehicles and spacecraft and take the battlefield whichever way you see fit.

AFF:Planetstorm is currently a mod for Unreal Tournament 3, but we're in the process of porting it to Epic's UDK engine for a standalone release. The next game will be bigger and badder, but the current one is pretty big and bad! Come and support us by capping our asses every sunday! (although our server is online 24/7 if you want to play any other time)

The status of the server can be viewed here -

Many thanks to CozmicShredder for the continued loan of his server.
Comments

I would love to be there, but that appears to be 3AM for me, and so I will most likely miss out.

6 in the morning for us.

It's actually Sunday AND Saturday 7PM GMT. Depends on whenever is most convenient. It's actually around 2 AM for me too, but I'm there on at least one day (either Sunday or Saturday). :)

The RC8 release its better than evar is it? I wonder what evar has to say about that :P

I've been looking for a torrent of RC8, no one has one...

i also had some problems with this but after a few trys it did work for me.

Perhaps there should be a 7am GMT agreement too for those on the wrong side of the planet. Sadly, a lot of us are Euro and wouldn't be able to make that time, but if it helps you guys get a game...

I'll ask around about getting a torrent set up, in the mean time though, doesnt Firefox's download manager support resuming?

Firefox does not support download resuming as for this event I would like to ask if there will be EU servers.

Yea the player count simply didn't warrant two servers. Even with one it's still pretty sparse, so us Euros just play on the US server. It's not like we're playing so competitively as get all upset about a 100-200 ping, so provided there isn't too much warping going on, which it doesn't, it's really quite playable from here, so it's all good :)

so that's what the screenies were for :P, and mb post the battle threads here for newcomers??

Wonderful; I downloaded this mod and was disappointed, 1.6GB later, to see nobody playing. Good to see something organized.

everyone: remember that the server won't show up if you have the wrong gametype in your server filter.

Huh. It's dropped off the front page....