Penny Arcade put up a new comic. It's about Minecraft. And it says Part One. After Part One, there usually is a Part Two! OR MORE! And then Rock, Paper, Shotgun is doing an ongoing series on Minecraft called Mine The Gap.

Ok, so Penny Arcade put up a new comic. It's about Minecraft. And it says Part One. After Part One, there usually is a Part Two! OR MORE! 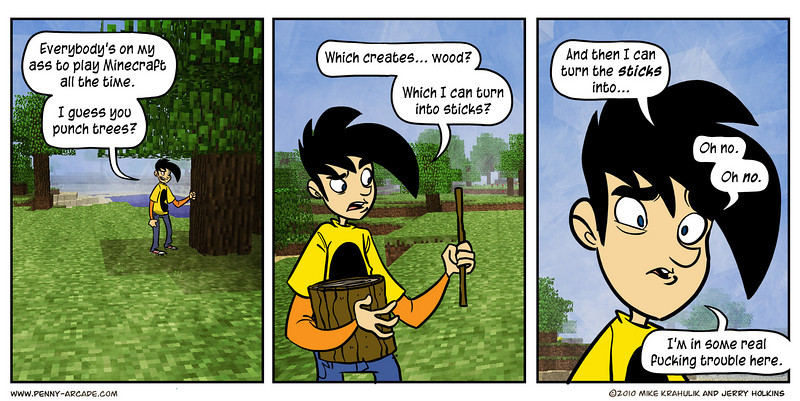 (I'm not sure if I'm allowed to reproduce it here or not, so I'll play it safe and just link them)

And then Rock, Paper, Shotgun is doing an ongoing series on Minecraft called Mine The Gap (har har!). It's up to Day 3 now, but if you scroll down to the bottom on this page, you can read it from the start: Rockpapershotgun.com

(And I must say that the painterly pack is looking mighty good in some cases.. Seeing it in RPS reminded me to talk to rhodox.)

As for development, I was going to update the game yesterday, but kind of forgot.. I've fixed furnaces in SMP and added volume and mouse sensitivity sliders in the options. I've got TWO meetings today despite me trying hard not to have any at all, so the Friday update will probably happen at around midnight my time.

I do realize that the sooner we get all these talking to banks and accountants sorted out, the sooner the company can get started, but I do miss development..


Also, I need rest! (technically food and beer) I'll finish the update tomorrow instead.
I'll add crouching, which will prevent you from walking over an edge, to make up for the late release. :D

I had an interesting idea on how to teach people the crafting in Minecraft. The first thing that's needed in any case is something that tells the player to press “I” to access the inventory. Once that is up, there could be a small “recipe” icon in the upper right corner. Pressing that opens up a tech tree with everything except wood planks grayed out into mysterious question marks. Hovering the wood planks shows the recipe (tree trunk -> wood planks!), and if the player completes that recipe he unlocks the next recipes in the tech tree thing. The recipes link into each other in somewhat logical ways, and can be non-crafting things like showing that a better pickaxe is requires to get ore, or that ore in a furnace produces ingots.

Note that you don't actually HAVE to unlock anything in the tech tree to be able to craft those things, it's just meant as a way to show people what can be made, and add some kind of exploration to it.

Once we have achievements, one of them can be for completing the entire crafting tech tree. :D

I think the meetings got cancelled! :D

I thought that would happen. sorry admin-y approve guy! I was also on the fence of "am I allowed to post it or not?". sorry!

Good for you guys getting featured all over :D.

Updated the news for the Seecret.....SATURDAY update.

YAY a new update i look forward to these every week