Not one, but TWO patches in a row, side-by-side! Piracy, a new Remnant faction, and (at long last!) we enter into the 2011 IGF! A full summary of the two patches changes', and a direct link to them, are included. 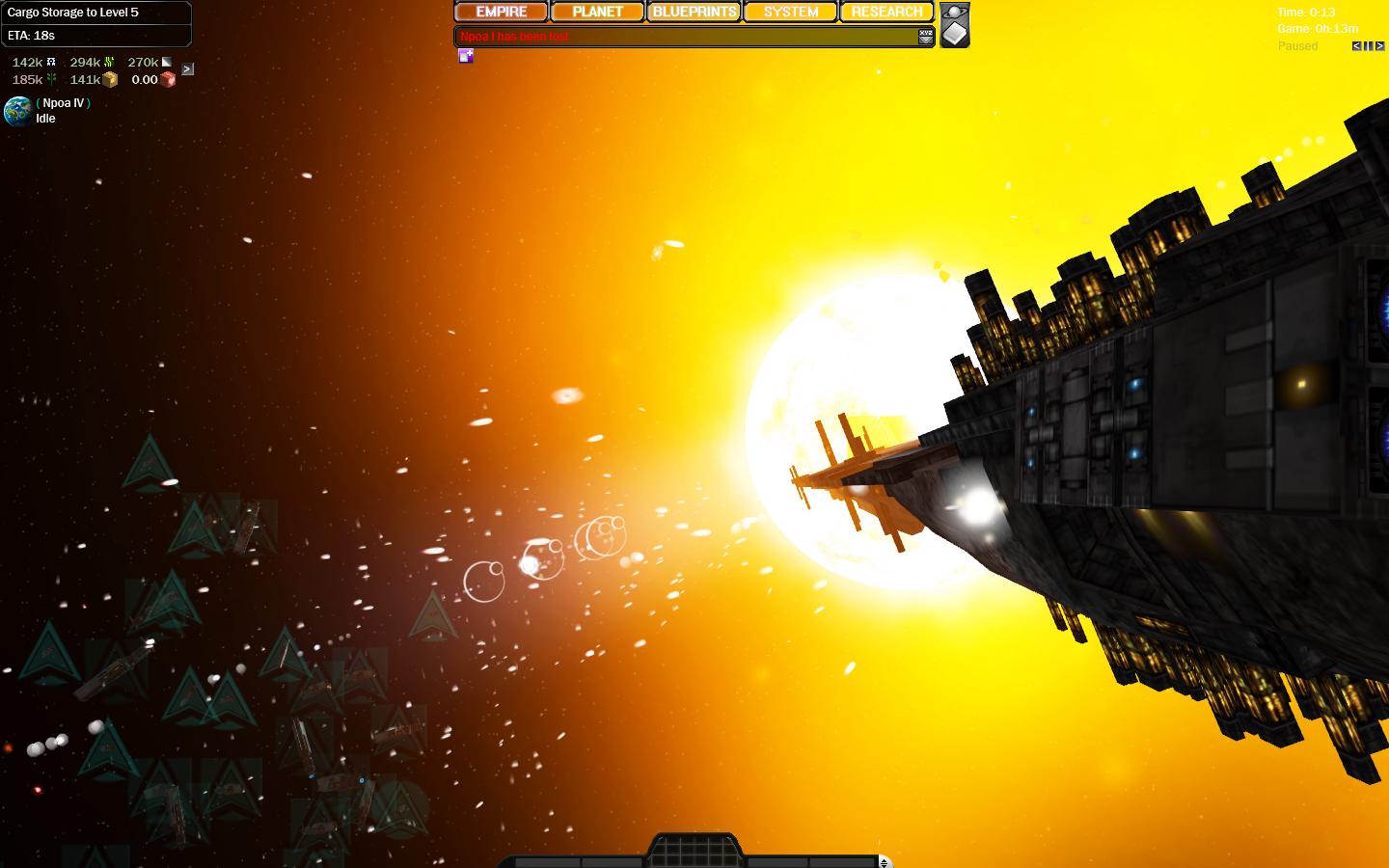 A Pirate's Life for Me

Lots of new and engaging features are on display in the new patches. If you haven't played since 1.0.0.0, now might be the time to try to pick the game back up again! Here's the major changes in the latest updates: 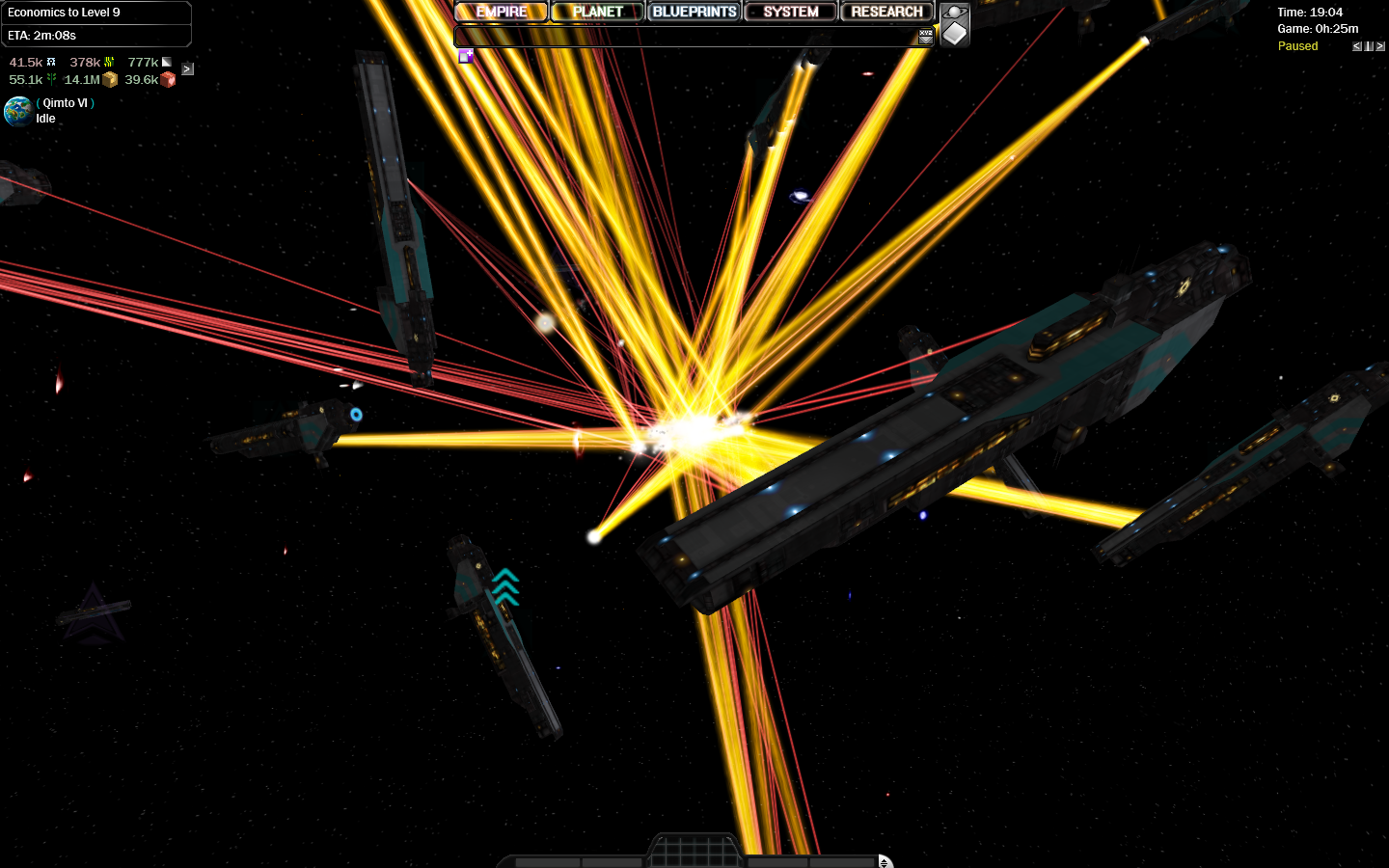 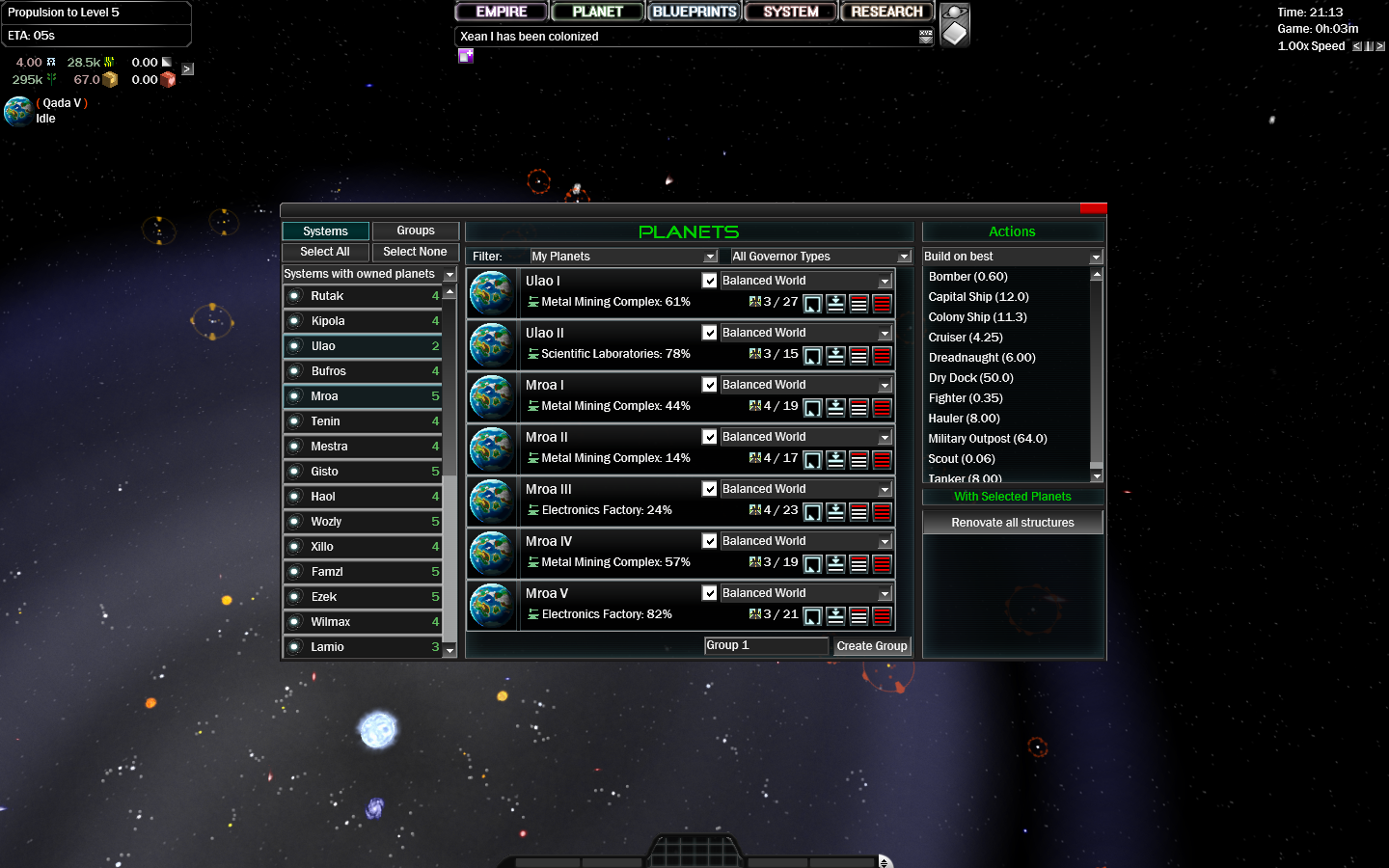 Pirates enter the fray, after much delay. The Pirates are an NPC faction that steals resources from weak but economically profitable systems. There are a few sorts of Pirate ships that may be employed, ranging from defensive escorts to ships capable of launching waves of boarding parties to assault and take over enemy ships from the inside. If they encounter an overwhelming force, they'll flee back into the darkness with their haul in stow, receiving a research boost and a greater capacity in ship building. The difficulty rating of the game determines how frequent and how large raiding parties deploy. Pirates are a toggleable setting in the New Game options.

Champions of a Fallen Empire

Remnants are the old bits and pieces of a fallen Empire, scattered over the galaxy. Leaderless and bitter, they attack all who venture near their systems. Their ships and technology are advanced but lack logistical support and tactical cohesion. Their assets range from defensive, stationary, platforms to large, powerful, gunships capable of devastating most early-game ships in one-on-one combat. The number and amount of Remnants in the galaxy is determined by the difficulty setting in New Game; they are a toggleable feature.

A range ring has been added to the game to convey the weapons range of ships. It currently picks the largest weapon available on the ship and displays its range as a large faded circle. It can be accessed by holding down the ALT key while mousing over a unit whose blueprint you own. 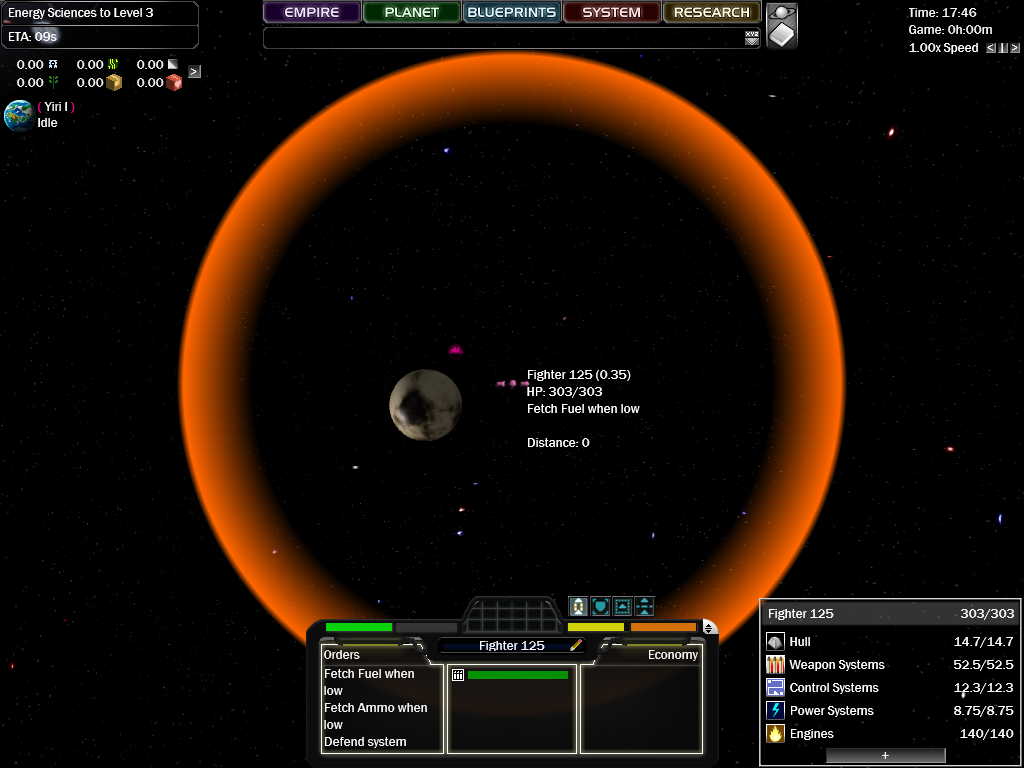 This homeworld is well within this Fighter's firing range.

As some of you may recall, last year we tried to enter into the IGF but hesitated at the last moment, deciding to wait until this year to debut the game at the IGF when we'd had more time to work on the game. Well, it's now a reality! Star Ruler is an official contestant in the 2011 IGF now and we are eagerly looking forward to bumping shoulders with other folk in the independent gaming field.
Best of luck to all attending and we hope to see you in California!!

For those new to the IGF: Here's a link to the festival's official website! 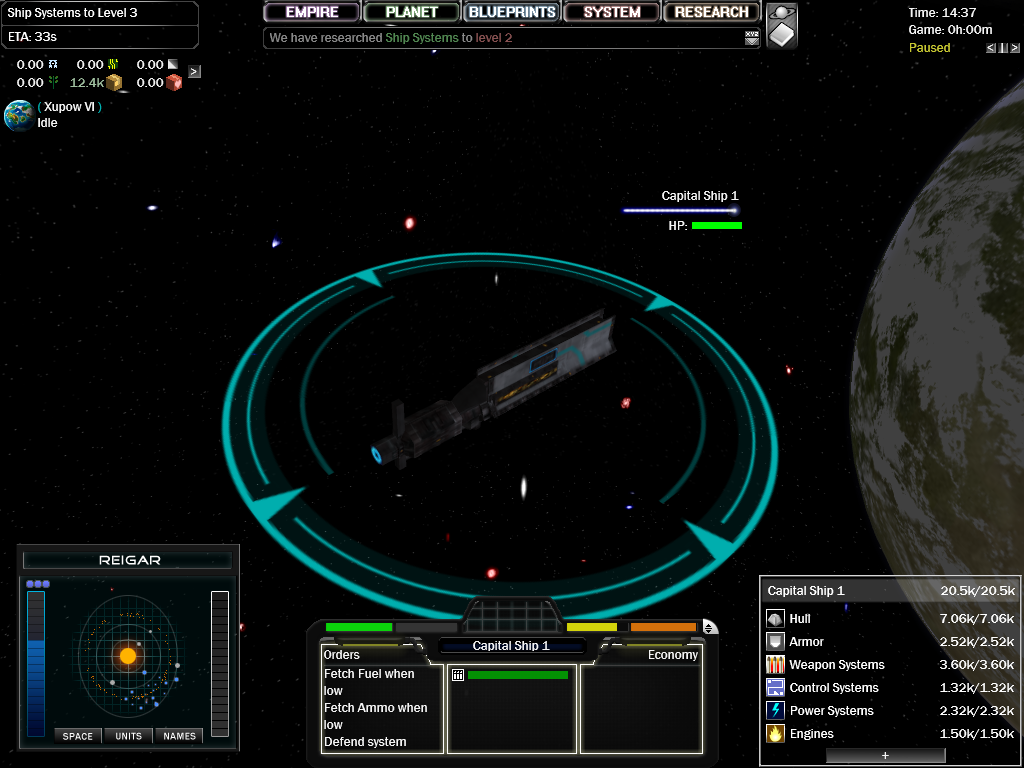 We're working on getting some new blood into our art department from our community, which will hopefully result in new ship sets, new planetary textures, and possibly some surprises yet to come!

New Music!
Artem Bank is cooking up a storm over in his studio, brewing a host of new songs for the game. You can check the new songs that are out over at his Bandcamp: Artembank.bandcamp.com

Finally, Artem is running a bit of a show over at his blog, where he is showing off how he makes music for the game! Currently up is the new track "Cosmic Dissonance" : Cagedrabbit.com


[Fixed] Civil acts were not affecting labor rate.
[Fixed] Use tool orders were ignoring the hull's orbit targets setting.
[Fixed] Floating point errors were accumulating into the ships damage stat, leading to repair tools continuously firing.
[Fixed] Victory message is no longer displayed when you start a game with no AIs.
[Fixed] Explosion effects would sometimes randomly appear in the system when you started a game.
[Fixed] Fixed crashes on saving/loading dock and retrofit orders.
[Fixed] Map-specified tags in the new game menu were not being displayed in the scroll box.
[Fixed] Fleet names are now saved and loaded.
[Fixed] The Phased Energy Beam was too cheap, and did far too little damage.
[Fixed] Combat effects were broken in the legacy 1014 mod.
[Fixed] Fleets could add other fleets as members, causing various issues.
[Fixed] The camera position is now saved and restored on load.
[Fixed] Servers/clients could lose connections if they took too long during the loading stage.
[Fixed] Planet ticks (which handled the economy) were not using a managed tick rate, causing slower production than intended.
[Fixed] Planets will be correctly lost when population reaches 0.
[Fixed] Stealth Hulls were applying their effects after armor.
[Fixed] Homeworlds now hijack the orbits of existing planets if possible, fixing planets orbiting through each other in non-tiny galaxies.
[Fixed] Minor script exception in multi-rack mounts.
[Fixed] Autosave was triggering every 15 seconds instead of 15 minutes.
[Fixed] AIs were not checking systems generated after their home system for expansion, leading to randomly stalled AIs.
[Fixed] Targeting sensors that were smaller than the connected weapon could actually reduce range.

[Added] Maps can now define options for an advanced window in their xml files, they can control the size and columns of their advanced window.
[Added] Option to turn off galaxy gas display.
[Added] The Options and new game windows can now be localized.
[Added] Ships without engines (i.e. stations) now orbit the planets that created them.
[Added] Added basic interface to choose empire settings when a game starts.
[Added] Added range rings - hold alt to show the range of the selected and/or hovered object.
[Added] Arrrr! Pirates will now periodically raid systems with lots of resources but no defenses.
[Added] The names of the default, AI and pirate ships can now be localized.
[Added] Autosaves and quicksaves are now rotated, you can specify how many saves to keep. The ones with the higher numbers will be older.
[Added] The planet window's queue tab now displays the total cost of the current queue.
[Added] Added proper ship set support.
[Added] "Defend Position" stance, ships will engage targets but return to their original position afterwards.
[Added] "Update All" button in blueprints list that immediately updates all designs to the latest tech level.
[Added] Remnants now roam uncolonized systems and attack all ships within them. Their amount and frequency depends on the difficulty.
[Added] A basic victory condition (destroy every planet owned by another player).
[Added] Subsystems in the damage report window now display their current level.
[Added] Entry in the right-click menu to select all ships in a system with the same blueprint as the one you clicked on.
[Added] Stations can now be retrofitted at the planet they are orbiting. It will cost 20% more than usual (up to 60% of the cost of building a new one) to represent the cost of moving it down and launching it back up again.
[Added] Added localized versions of various graphical buttons for French and German.

You have my attention.

any chances for updated demo?

Updated demo is being worked on and should be released somewhat soon.

good to hear, cause this game looks rather interesting :)