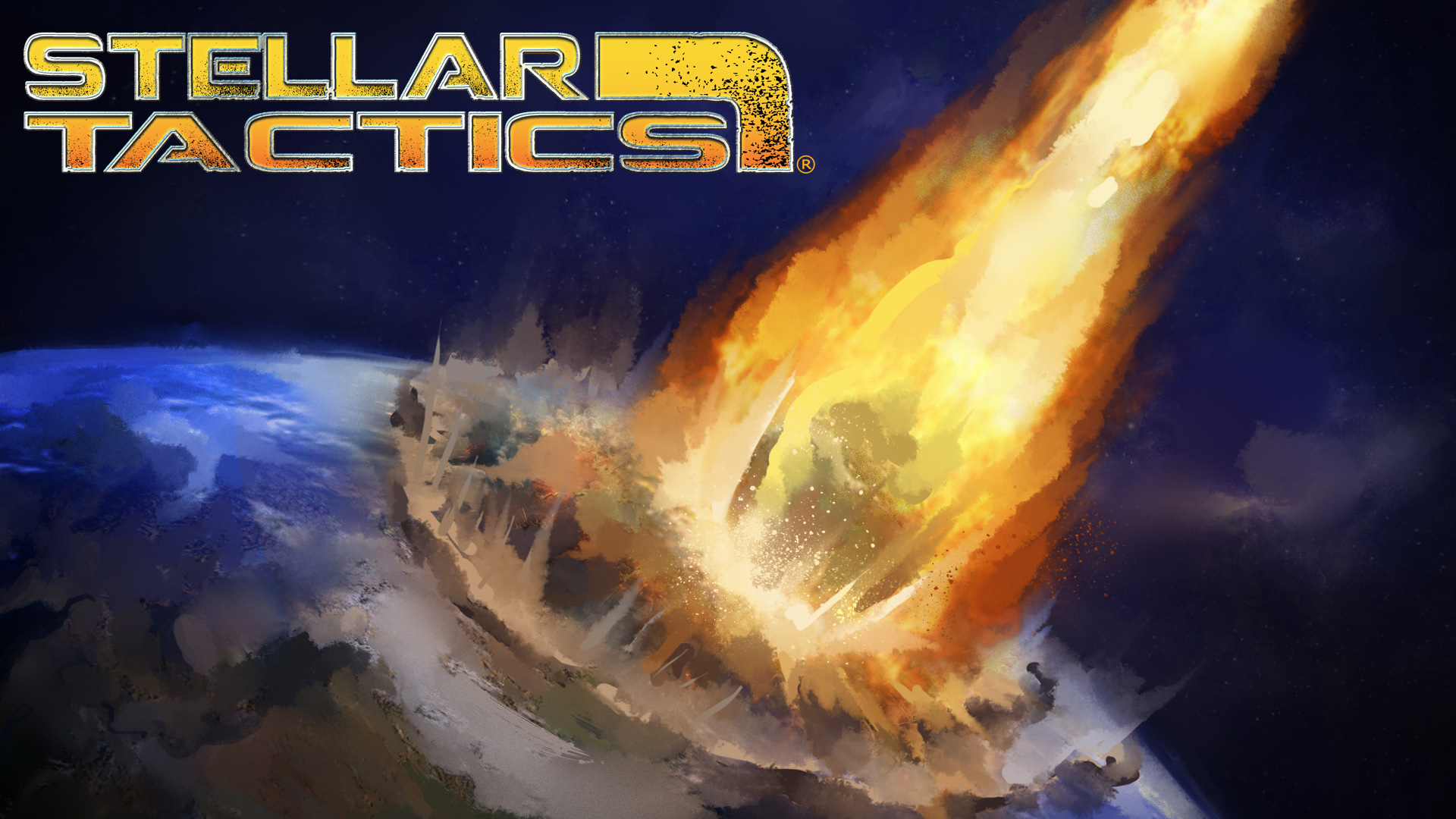 Hi everyone! You can find the latest patch notes since the last patch announcement below. I'd also like to give you a little preview of some of the work I'll be doing. This will be the last patch for a while unless there is a blocker or some other major problem that comes up so I can branch off and focus exclusively on the ground combat system for a while. 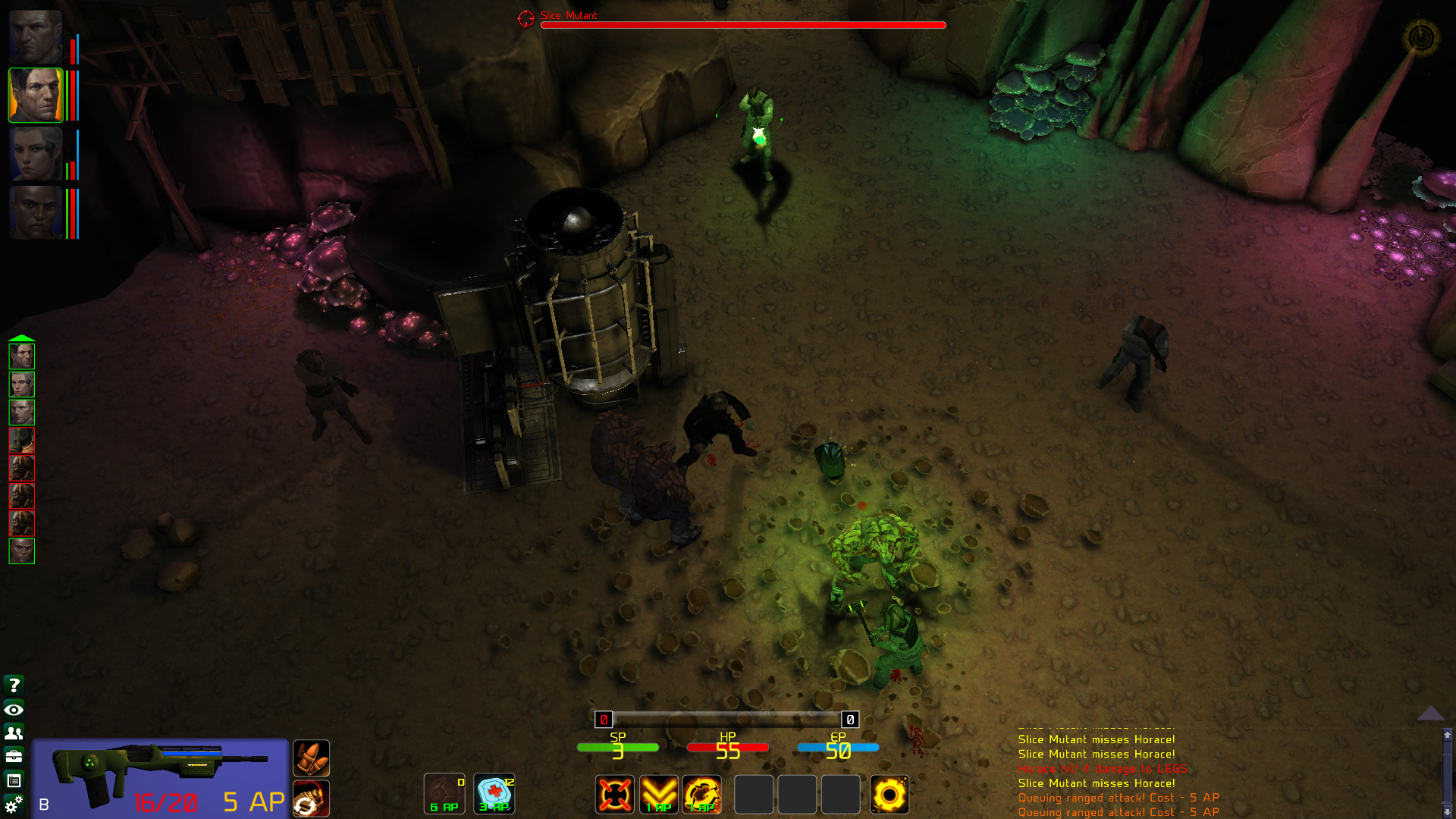 Movement and blocking system overhaul - I'll be refining this system so blocking mechanics and movement in combat are much improved. The goal is to provide consistent blocking mechanics for both the enemies and the player characters going forward and to remove various annoyances with the current system.

Attacks of opportunity - (PC's and NPC's) If characters are adjacent to an enemies position and move out of range, the closest combatant will get a free single attack. That is a single melee attack or a single shot from ranged weapons.

Defend - (selected when ending your turn - PC's and NPC's) - Can be selected if you have 2 AP left over - gain immunity to one attack in the next round of combat.

Guard - (selected when ending your turn - PC's and NPC's) - I'll be looking into the ability to guard areas of visibility, gaining an opportunity to fire on enemies coming into the characters line of sight. This selection when ending your turn will likely take all your AP, can only be used once in any combat scenario. I find this mechanic overpowering so I want to make sure it is used sparingly. I'll scrap it if it's abusive.

I'll be removing the cursor based targeting functionality. The current active cursor will be removed completely. Instead you will have a improved information and targeting UI for rollover info and selected targets that includes dedicated targeting for head, torso, arms and legs.

I'll also be tightening up delays in all combat animations, ranged weapon delays and generally polishing a number of areas related to the ground combat system.

I'll be adding combat specific powers that allow you to perform a variety weapon attacks and effects. These have always been a part of the plan and it's time to implement them. Examples are sniping, backstabs, teleportation, PBAoE attacks, weapon overloads, spread damage for shotguns and smg's as well as shared melee and ranged effects. First-aid will get AE heals, HoT, buffs and debuffs.

The above is not related to "Azimuth" which is something that will go in the game at a later time.

I'll make sure to post regular updates and share videos when it makes sense. Thanks again for your support! 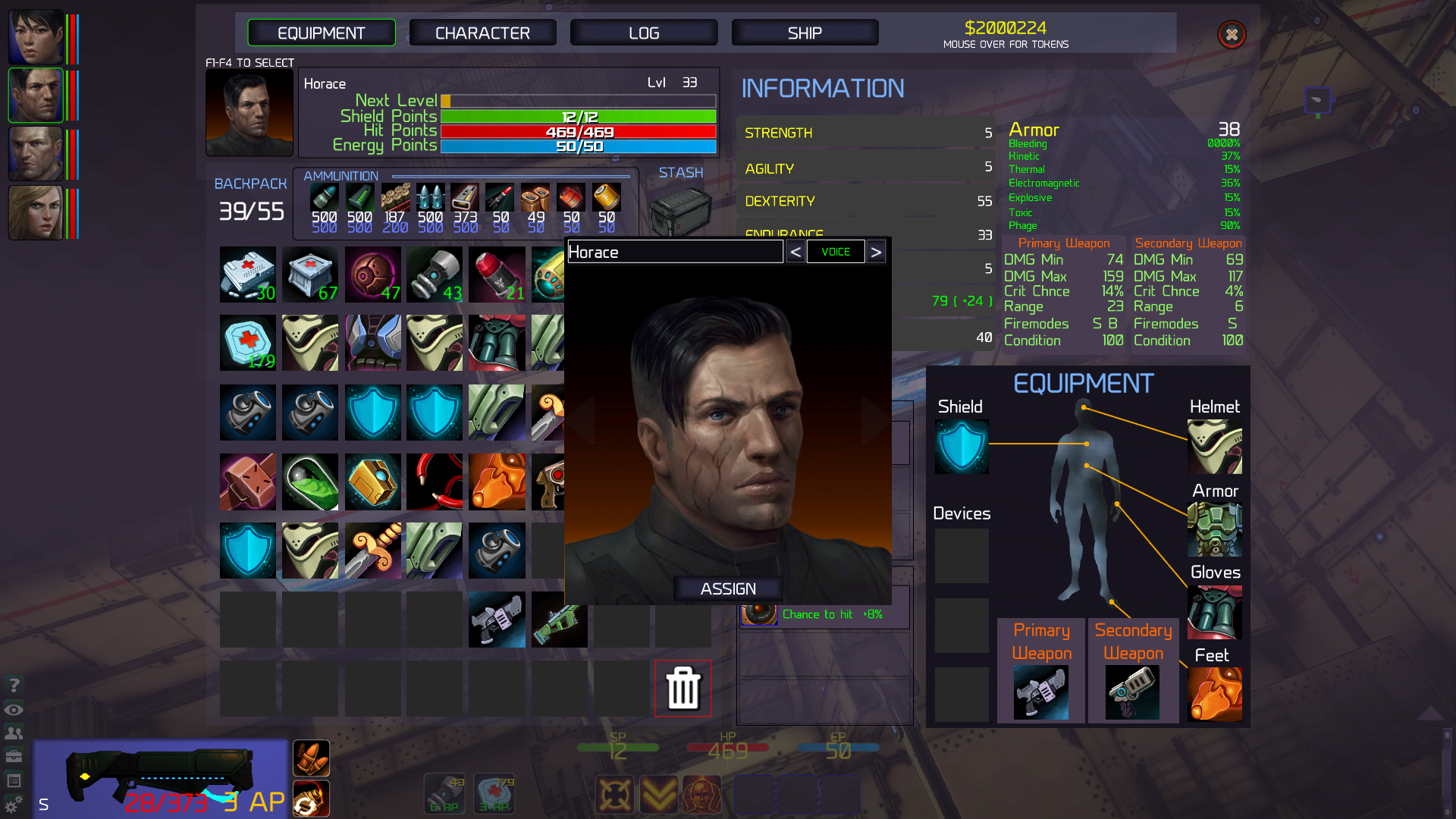 Recent patch notes
0.118FIXED: Trigger group mods for pistols that have burst and full auto modifications now work as intended.
FIXED: Merc stat assignments now display correct HP when assigning STR/END in character information UI.
FIXED: Assigning points to stats no longer adjust your HP to max while in combat.
FIXED: Alpha blending errors in some areas corrected.
FIXED: Alpha blending errors when using multiple gas grenades corrected.
FIXED: Bright green weapon on or near ground when swapping weapons removed.
FIXED: Door to Phestus now works as intended. I had disabled it a while ago so it was always open.
FIXED: A bug that could cause the enemy to stop responding if healing inside a gas cloud.
FIXED: A bug that would cause toxic gas clouds to continously stack dot damage on combatants.
FIXED: When attacking with melee weapons from a crouched position and using the combat queue, it was possible to get an additional attack.
FIXED: The crouch/stand icon on the toolbar is now correctly updated when attacking from a crouched position.
UPDATED: The 1AP cost to turn your team members while in combat via the tool bar has been removed. You now have unlimited visibility from your position at no AP cost.
UPDATED: Double clicking inventory items no longer moves them to your stash. You must shift click or drag and drop items from you inventory to the stash icon.
UPDATED: While in combat you can no longer select other team members by left clicking with the mouse. This was confusing because you could have unintentionally selected another team member who's turn was not active and tried to end your turn. If you have another team member selected when it is your turn, you cannot end your turn. You can still select other team members using the F1-F4 keys while in combat or by clicking on their portraits.
UPDATED: After rotating the camera using the left mouse button, the cursor is restored without needing to move your mouse.
ADDED: If you have the mission "Speak with Scarby" in your active log after you have already finished the mission, you can now return to Hurzog Mining, walk towards the vendor and the mission will auto-complete.

0.117UPDATED: Labels in space for incursion ships are now orange instead of red so they can easily be recognized and separated from other hostile ships (red labels).

UPDATED: Space incursions can be canceled when not in combat while in space. No need to dock anymore. Just click the small cancel icon on the incursion label at the top of the screen.

UPDATED: Armor, weapon, mod and shield vendors now offer more items when they generate their inventory. This leads to more options available on the vendors.

ADDED: Border highlights for all enemies and player characters in combat - this work is part of the combat revamp - many more changes to come to the core systems.

FIXED: One of the mutant types was always hidden when not in direct view, even when using the [TAB] key (default for highlight objects). Could make it difficult to identify the enemy during combat.
FIXED: You can once again micro-warp from incursions (assuming your turrets are off) at full speed.
FIXED: Ship loot crate labels no longer disappear if you travel far away from the crate.
FIXED: Ship loot crate labels no longer appear on screen when the crate is behind you or not visible in the camera view.
FIXED: A bug that would allow ship vendors to occasionally sell turrets that would not fit on ships.
FIXED: Assigned merc weapons when recruiting them now generate with the correct range and max ammo values.
FIXED: Starting ranged weapons for your generated character and team members are now corretly assigned with default range, ammo and damage values based on the adjustments I made a while ago (increased base range for rifles and side-arms, increased base ammo capacity for weapons).
FIXED: Mining skill level cap adjusted to level 60 like other skills.
FIXED: A bug with stun grenades permanently stunning enemies.
FIXED: It was possible for enemies to heal themselves beyond their maximum HP
FIXED: Turrets now fire even if you don't have a team member in the weaponry station slot.

0.115FIXED: A few starter weapons needed ammo and range updates.
FIXED: A navigation error in the Vats.
FIXED: Another possible fix for the keyboard not responding when micro-warping to a station.
UPDATED: UI information lists in space can now be scrolled when dragged and with the mouse wheel.

0.114FIXED: A crash when launching from the surface near the Aznari Ruins the first time you enter space. Thanks for reporting this!
UPDATED: Loading a save game while already in the game world is now much faster
UPDATED: Returning to the main menu while in the game world is now much faster - that includes Game Over...
UPDATED: Loading screen display updated so it functions like it did before displaying tips, progress etc.
UPDATED: When customizing character portraits/names/voices in the popup window after clicking character portraits in the character info window, the arrows to the left and right of the portraits can now be clearly seen. Before they could have been overlooked.