The Party of Sin team continue their commitment to open development updates. Pictures of Hell inside!

Here is our second post as part of our commitment to open development. We had our usual weekly meeting on Monday (we do it over Skype) and we had an in depth talk about some core issues in our development. Tobias, our concept artist, started the discussion. We’ve got some more progress pics as well. Let me fill you in.

We’re putting everything we’ve got into Party of Sin and we want to make sure it’s an exciting experience from beginning on end. That being said, a lot of our levels are taking longer than anticipated. Introducing unique mechanics in each level and having exciting action sequences puts a strain on level designers and artists alike; but we don’t want to ship with filler content! Of course, we also want to get the game in the hands of gamers as quickly as possible and get feedback. These goals contradict each other, but here are a few options we discussed:

Story really isn’t a priority in Party of Sin, and that means we can switch things around to make the game as enjoyable as possible. Our main focus is combat and platforming, and we’re making some great progress there. What do you think about our strategies? As an indie gamer, does getting a half-finished adventure bother you? Will you replay it as we update it?

On the technical side of things, I have been working on fixing a lot of bugs, including a doozie with the renderer this morning. We’ve been making a lot of changes to deep and dark parts of the code and it has made the game a little unstable. We’re getting it fixed though, no worries! I implement scripted camera movement last week and the artists have started putting together some cutscenes. Blake has been working on some new music which I had a chance to include in the game this week. I’ve also need working on categorizing our sound effects and tweaking the sound levels a little better. XACT is a really powerful tool. 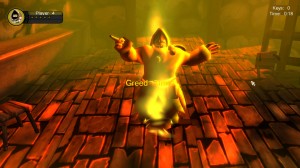 First scripted camera test, this is when a sin triggers his/her superpower.

For design, Vince has been working on Hell4. This is our turtle riding level. The Sins have to dodge obstacles, machine gun fire and traverse through a set of locks in this level. Vince has been working on the machine gun section and the locks recently. Last week progress was slow because of sickness, but he’s told me he quit his WoW subscription, so we should be seeing some good progress soon

Hell3 has improved considerably thanks to Liz and Paul this week. Liz has worked like a pro and gotten the lighting from last week fixed. Here are a few renders of the level taking shape! 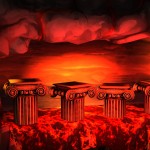 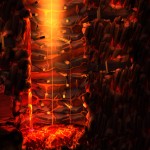 Finally, Alex and I had a chance to interview with Global TV’s Focus Montreal this week (we’ll be on air Saturday at 6:30 pm for those in Montreal). We taped that yesterday and I have to say it was a wonderful experience. Thanks to Thalia and Richard for inviting us to the show. The video will be online Tuesday, we’ll post about it in more detail then.

The level design in Hell 3 is giving me Ghouls 'n' Ghosts vibes, which is awesome. :D

:D there are still a few tweaks to be done... but its coming along