Asia Pacific Alliance Overlord Tank The ZTH-02 (Official designation, which stands for Armored Vehicle - Tank - Fire Support; Type 2002) Overlord Tank is the symbol of Chinese military strength in the 21st century. It was deployed in all major battles of the First Global Counter-Terrorist War, from Beijing, Dushanbe, and Stuttgart, to the final offensive in Hamburg. 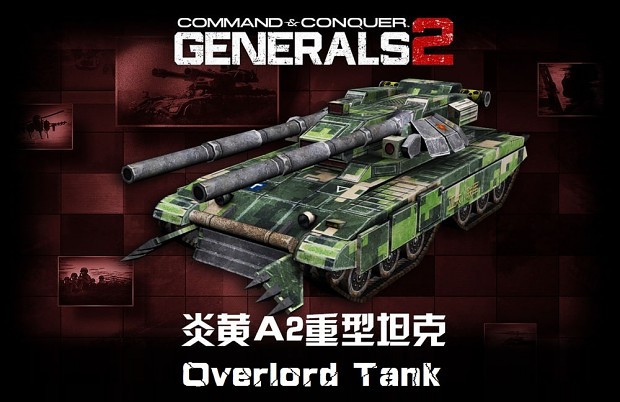 The ZTH-02 (Official designation, which stands for Armored Vehicle - Tank - Fire Support; Type 2002) Overlord Tank is the symbol of Chinese military strength in the 21st century. It was deployed in all major battles of the First Global Counter-Terrorist War, from Beijing, Dushanbe, and Stuttgart, to the final offensive in Hamburg.

However, when photographs of the tank was first revealed in 2005 by Kanwa Defense Review, it was not given high hopes. Like its Soviet heavy tank predecessors, it was considered too heavy, too slow, lacking in firepower, and an easy target due to its large size. In a word, "obsolete". But the personal endorsement of decorated veterans within the People's Liberation Army, such as General Ta Hun Kwai, as well as the news that the Overlord would participate in the 2009 military parade, silenced the voices of doubt about the tank, at least within the PLA itself.

Unbeknownst to anyone, the military parade would end all doubts about the Overlord from across the world. When cheering and applause turned into explosion and gunfire, when a five kiloton nuclear warhead detonated in the heart of the city, incinerating thousands of innocent lives, Tiananmen Square turned into hell.

But when the Overlord slowly emerged from the ruins of Tiananmen, the tank brought the grieving Chinese people new hope, courage and strength, much like its legendary namesake, Yanhuang. When the Vice Chairman stood atop the tank and gave the first speech of the Counter-Terrorist War using the on-board speaker tower, 2.3 million soldiers and 1.3 billion people erupted. GLA, these three letters were forever emblazoned into their memories, along with the image of the tank that survived the nuclear devastation.

The year is now 2019, ten years after the Tiananmen Disaster. With the situation in the Southern Pacific region reaching critical levels, the new ZTH-15 entered service. This model of the Overlord is much more modernized compared to its predecessor. It possesses more advanced defensive capabilities, including the latest British-made composite armor and the external "Relic" reactive armor (mainly used in export version).

Its secondary weapon systems have also been revamped. Not only is the ZTH-15 compatible with the new LD-3000 unmanned Gatling turret, it can also be upgraded with the revolutionary TOS-2 incendiary rocket launcher, capable of decimating waves and waves of GLA infantry and light vehicles from afar. Furthermore, the new speaker system is capable of inciting a fighting frenzy in the surrounding units.

In order to boost its mobility, the Overlord Mk. II, like its predecessor, can be upgraded with nuclear batteries to supplement its primary power system. While this has the side effect of making the tanks violently explode and leak radiation when destroyed, General Ma Shen's Atomic Warfare Division has developed a more advanced isotope stabilization process, preventing this from occurring.

you need some help with proper English. I would be willing to help with the grammar and proofreading.

yes this english is really bad. You should indeed get some help with it.

because it's translated by Google

Okay... So I revamped the translation. Should be better now.