The first 10 days on Kickstarter are over and they were awesome! This is our first update on the campaign and we will look at some of the game's mechanics in depth.

this is the first of a series of posts about Outbuddies´ gameplay mechanics and other technical stuff related to our open beta demo and the running Kickstarter campaign. We´re doing good so far and reached 75% of our basic funding goal. We want you to be prepared well when you (hopefully) join our campaign and get your hands on the beta build soon. Please let us know what you think!

Don't forget we're on Kickstarter and need your support to get our team funded!

If you´ve played the demo you´ll have noticed that John is not able to shoot diagonally. The reason behind this is to limit the possibilities of the player to attack enemies from a safe distance and force confrontation. Not allowing diagonal shooting also changes the level design, and makes the game much more suitable for keyboard input.

All bigger enemies have close-range as well as bullet attacks and you´ll have to learn their anticipation stances to stand a chance. Also finding the right position and platform to attack from will be very important, without moving your ass constantly, you won´t survive for long. Luckily there´s a dodging mechanic, which renders John invisible for a couple of frames. The first mini-boss Blackthorn will test your understanding of these basic combat mechanics, without using them, he´s impossible to beat (he still kicks my ass at times).

WHAT YOU CAN DO WITH BUDDY

At the beginning of the game, Buddy saves John from the waters and injects him with some drugs to save his life. Buddy also connects to John´s nervous system - an unlikely friendship is born. However, Buddy´s origin will stay in the dark for a little longer...

Uncovering the hostile secrets of Bahlam, Buddy will be your best bet in a lot of situations. Your sidekick can use its telekinetic powers to move loose objects and manipulate the environment to your advantage. It will help John to overcome traps and activate ancient mechanisms. Buddy also scans objects, doors and walls to find hidden passages and reveal useful information. In combat situations, Buddy´s slingshot cannon can be extremely helpful as a long range weapon with 360° shooting angles. You can also use Buddy to collect enemy drops and scout ahead.

Not all of Buddie`s abilities are available right from the start. We´re working on the hacking mechanics that will be introduced later in the game. The game can already be played in local Co-Op but the implementation still feels a little unbalanced and will be reworked in the next months of development. Also, We´ll probably add some extra challenges for the second player that will only occur in local Co-Op mode.

There was a wall glitch in one of the first rooms that could break the game. We also updated the water shaders, so flooded areas are visually clearer and more appealing now.

As some of you already know, Amandy Kiefer joined the Outbuddies project as a freelancing concept artist and we really need your help to get her on board! Here are some slices from her portfolio and our Kickstarter banner. Also, Amanda started to draw the exclusive backer's wallpaper this week and we hope to provide a first glimpse of it soon (there will be Wozan, for sure!) 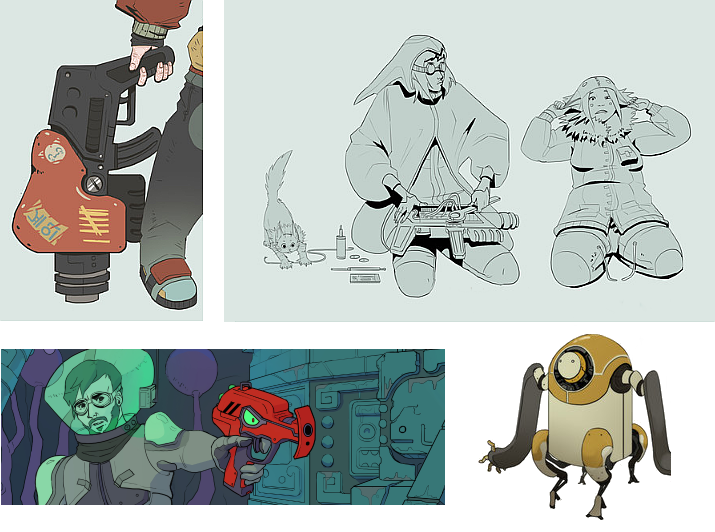