Alot has been done since May and the progress is going brilliant. Ever since May, alot of maps have been designed on the mod and its currently going through the final chosen look.

June Update
Another succesful month has gone on the mod. During this month, I am basically revisiting the old sections of the mod, and reviving them to update the mod.

The storyline has now been updated due to many conflicts with the Half-Life 2 Universe and this is now the final version. Still based in the Half-Life 2 universe, the player will no longer play as Gordon Freeman. However, players will take the role of Samuel Greystock. A child who once lived in the areas of what used to be home to one of the biggest cities, now the new home to City 15. Samuel escaped his home with his parents during the Seven Hour War invasion. Since then, the family have lived in the baron wastelands. It wasnt till he was 21 changed his life. Samuel lost his parents to a Wasteland Patrol Unit while Sam was out in the baron lands. Upon entering home, Sam instantly attacked the Unit with no hesitiation. Upon the loss of his parents, Sam looked on his childhood City which was being used for the Combine Portals. Sam from there could not stand the pain of others living in City 15, Samuel could not hold it and so set off to City 15, hoping to stop the power of the Combine.
*You can find more about the portal unit on the mods page*

Maps are going well, currently I have alot of development maps. These development maps are used as bases for the offical maps. When one section looks correct, or one map is going brilliant, it will be used in the Official maps and updated from there to fit the main storyline. Of course development maps are following the storyline, so nothing is off topic. Many sections being worked on are the Residential Areas/Industrial Areas and the Combine Portal Grounds. 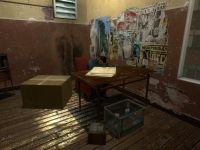 Residential Areas will play a big part in showing the Combines power. All civilians will be interactable so they add to the situation of the Combine. 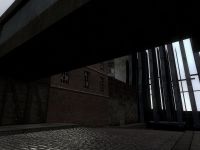 One of the many sections going to be featured. The industrial section is going to be a very gritty and dark environment for the playing.

One success I have with the mod, is High Def skinning. I have managed to succesful input a fabric look onto the Combine Soldiers texture. Below is the progress (Click on them for better detail) 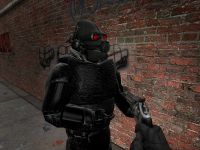 Thats all so far but the progress is doing great. Thanks for reading and I wish luck to fellow modders and indie developers. Thank you.

The new storyline is much better than the one before. A good decision to change it. Now the summary page has to be updated.