The third update for Otherworld, New media: pictures, video and other random information

Hi again, This is the third update for Otherworld

Unfortunatly a couple of unexpected events has occured, so this update did not go as planned.

A few days ago a new picture appeared on the moddb page, it was a sneak peak of one of the first arena's avaliable in-game: 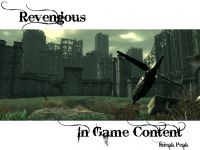 This arena takes place in an un-named post apocalyptic city, most likely somewhere outside of America. Within the very centre of the city lay a cemetery, which housed the bodies of the countries greatest heroes. Since you just crashed your flying vehicle (currently its a vertibird, but its just a placeholder for now) you have woken the dead and zombies are appearing from everywhere. This arena will be one of the smallest arena in-game, making it harder to defend from the growing horde of zombies. This was going to be released in a beta, with this update focused around it.

unfourtunatly there were small small problems with the L.O.D generation for the map. The first time it generated it returned the result as seen in the picture. This was not good enough, so some adjustments were made and...it crashed the worldspace.

I must be half zombie, because I decided it would be for the best if I did an uninstall of Fallout 3 and re install (maybe I thought it would fix the L.O.D?). What ever the reason, it was one that took the mod for another downturn (how many downturns are there gonna be?) as it turns out my fallout 3 disc is scrathed, returning cyclic redundancy errors on data2.cab. I've decided to blame my dvd drive for this, which has resulted in it dying when i needed it. Now my computer is fallout 3 and dvd drive free...

But I'm not giving up, A new drive will be arriving soon, along with a another copy of Fallout 3, woo!, hopefully I can return to the G.E.C.K and continue modding.

So this News post is about the bad things that have happened recently?
No! I plan for all news posts to give some sort of information and help other modders, or try to make people go 'wow'. So lets get into some new content!

Game Props and destructible objects:
Otherworld will be as realistic as possible (zombies, realistic? uh right...) so I dont want bullets flying and things not falling apart. Introducing the crate!: 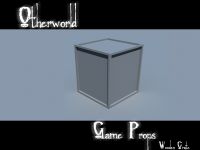 Shoot at it for a bit and it will eventually end up like this: 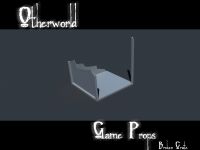 And shoot that a bit more and nothing will be left! It might even be scripted to drop items when it gets broken up...

Almost everything will be destructible, And each will be destroyable in different ways, for example, shoot an explosive barrel and it will be covered in flames before going sky high! well the barrel will most likely explode... (note to self: add objcts that fly sky high!...)

Destructible objects are organised with destruction data. Every object can have a health amount assigned from 0 (dead) to any number you wish (alive). You can then assign certain nifty things to happen when the objects health reaches a certain point. Using the Crate example above it would be something like this:

10: full health
6: the object is damaged and would be replaced with the broken crate model, If anything was in the crate, it would be scripted to appear here
3: the crate has taken a beating and we want it to collapse soon, the crate would start taking damage each second until it reaches 0 health
0: the crate has been destroyed and only a couple of planks are left

Next update should show an example of this. 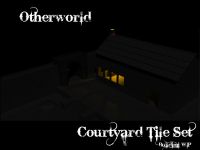 Add a bit of rain and its zombie killin' time!

One challenge in this is creating easy transitions from outdoors to indoors and vise versa. Normally you set them up in different world spaces but then you have loading screens inbetween, which would break the mood of the game. This is solved by making it all in one! The G.E.C.K has tools for telling what to render when, so there shouldn't be much of a frame rate loss with an outdoors/indoors combined map. This will be shown later (once I learn how to use them!)

(just on a side note, the house may end up being destroyable (there's no hiding from the zombies!) but it would require more scripting and effects (but it would be cool!)

Lastly its onto some weapons! (what, think I've only made a couple of weapons?)Another 2 weapons today, which makes it 4 in total that have been announced, out of the untold billions that have been planned...First its onto my favorite, and hopefully your favorite, How about a quick quiz?

Whats the best way to kill a zombie?

If you picked chainsaw then your correct! 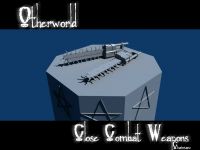 Although its more of a hedge trimmer crossed with a chainsaw, but it doesn't matter to those who are facing the blades...

The original purpose of this chainsaw was to cut hard stuff, such as concrete and rocks, but it will still cut your arms of easily, and maybe send them flying around!

naturally the blades will be spinning. I'm going to take a look at how the animated weapons the the DLC "The Pitt" operates and try and replicate it without the Pitt's .nif files (so it wont need any DLC's) but if it needs the Pitt's .nif then the mod will require the Pitt to play (unfortunate but chainsaw > people's needs)

This spinning weapon of death won't be avaliable to begin with! you'll need to earn it, say from the big bad boss on one of the levels?...

If you said that the best zombie weapon is some sort of shotgun, then I guess your correct in some sort of strange way, being equiped with one of these pump action shotguns should make zombies think twice about charging at you? yes? 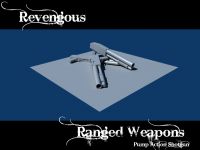 Equiped with 2 types of ammo, a wide spread to take down numerous zombies at close range, or a solid slug, which will send zombies head straight back to hell! Oh and if you havn't realised, there's gonna be no V.A.T.S in Otherworld (so you better learn how to aim!)

But wait! there's no 'pump action shotgun' animations in fallout 3! well I'm step ahead of you, as I once stated "I dont attempt things I know I can't do" and to wrap up this news post here's a video! yay!

Is that stick man wanking his tool?!!

haha no, the animation is only 6 frames long and its just a loop.