One of the main features of open Outcast will be its fully featured voice acting for all the characters. This is a lot of work. Don't believe us? See for yourself...

If you've ever played the original Outcast from 1999 you're probably familiar with the Talan, the native population of the alien world Adelpha in which the game took place. They were all male and spoke English well enough, but they also had some really weird and heavy accents along with some odd grammar.

In this feature we'll talk briefly about the process of recreating the Talan voices for Open Outcast.
The first thing you need is a microphone. Luckily for us, half decent cheaper large-condenser microphones are now available, so that's what we use. Once you've found a microphone you need someone to put in front of it. In our current voice over team we have a Swedish man and a Dutchman for this purpose. They have a naturally funny accent when speaking English, so they make great Talan. 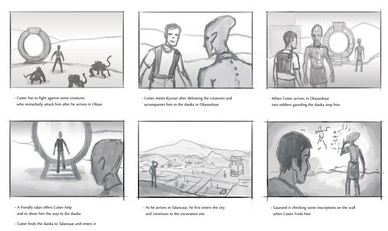 The next step is to hook them up with some dialogue to read. The game design team are responsible for creating the script, and they are busily converting our main story to a screenplay script right now. When the script for a particular scene or conversation is finalised, it is sent to the actors involved. All written parts are included for them - so they have the context of the in-game situation whilst they're recording - and they get a short bio of the character so they know the kind of role they'll be playing. After doing some test runs, the recording starts.

The voice actors and audio director have together come up with a few hints and tips on how to make a great Talan voice:

By using a series of filters, EQ's and pitch shifting plug-ins the Audio Department leader, Eddyster, is able to accurately recreate the Talan voice sound from the original Outcast and give the recording some extra character. As the audio director, it is further his responsibility to choose and compile the most appropriate takes that the actors submit. This is necessary because the actors do not record their parts together in the same room and hence cannot react to the other actors to counter or anticipate their mood.

He also has to make actor-related adjustments to each submission, as each actor uses widely varying recording equipment (microphone, interface, DAW, envrionment, etc, can all vary). Forming a coherent sound is important to gameplay, but should not result in all of the Talan having the same character, which should of course remain changeable - else the game would be pretty boring on the character variety front. It should also not, however, be noticeable that each actor recorded their part in a different environment entirely (imagine for example if one character's voice was very bass-heavy and the other very treble-heavy and lisspy).

When the file is done, Eddyster proceeds to convert, name, and implement the audio within the FMOD middleware framework (the Crysis audio middleware solution). From there the programmers, level designers and gamedesigners can trigger the dialogue at the needed time.

Here's a video clip of our Swedish voice actor performing the voice of our fisherman Talan Loras (known from our latest techdemo Oasis 1.1), versus the finished in-game result:

I would never see that white skinny dude as Sir Fisherman.

Seriously! But he is doing a great job. Typical of voice actors. :D

get of my island!

It would need more body gestures and a more wide open mouth, though. He doesn't seem concerned at all that you are ON HIS ISLAND! :D
Yes, I know, upcoming mod.
Great job.

Right, upcoming mod ;-) No seriously, we are working on some facial expressions as well as body expressions to support conversations...this will be definitely a feature of the mod.