"Past, Present & Future" is the title of Overwatch's last trailer for 2010, just in time for the final day of MOTY nominations. 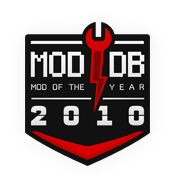 Overwatch has only been in development for a bit over a year and was released to the public for the first time less than four months ago, with four major updates to have since followed. Its development has come a long way already, with its four unique levels and fun-filled gameplay, and we hope to bring you more in the new year.

Overwatch's community has been key to its success, and thanks to all your votes, Overwatch has made the Top 100 list for this year's MOTY awards!

We are now in the final day of MOTY nominations, and what better way to celebrate than by presenting you with a trailer recapping Overwatch's development in 2010 and giving you a sneak peek of some of the features you will be enjoying in early 2011.

As soon as you are done watching, wipe off that drool and remember to vote for us again (by clicking on the big green Vote for this Mod! button at the top of the profile page, then navigating to Overwatch in the Half-Life 2 section under Released mods), and help us win this year's Mod of the Year award! Don't forget to log in to your ModDB.com account first, and since you can vote for as many mods as you like, be sure not to miss any of your favourites!


Love the music? So do we! Here is the complete track, written by Overwatch's amazing composer:

The year is not over yet, so be sure to keep an eye on Overwatch's homepage, where we will be announcing the winners of the Overwatch Level Design Contest and a few other surprises!

In closing, and on behalf of the entire Overwatch development team, I would like to reiterate how much we truly appreciate all the amazing feedback and support you have all given us, and wish everyone the happiest holidays and a fantastic new year!

That song is amazing. The video is awesome as well. I really wanna see those new maps.

Also, if you win MOTY, what will you give us? Maybe new weapons/units? More maps? Zombie-only mode? Songs as epic as that?

Even if we don't win, we'll still work as hard as we usually do!

<EXPACK's brain explodes from the sheer awesomeness shown in the video as well as the music!>

Might you consider adding special 'HL2 scenarios' which would recreate some of the classic Combine vs. Resistance battles from the HL2 series? Also, have you considered allowing the controllable sides to be switched? E.g. being able to have players control the Combine FPS-style and having the Resistance controlled RTS-style by one player, designated the "Resistance Commander"?

Ttally agree with you. yeah, it goes well for recreating key battles from hl2 - to add Gordon Freeman with or without Alyx, or Barney, maybe making 'em a special characters for random (or best, coz we know that for an ex. Gordon is a killing machine) players. And player controllable combine on the outskirts of city 17 where resistance is stronger than anywhere else. It goes well with hl2 plot, it can be done, and it can be epic (or not, I dunno, I'm not modmaker). But it's kinda strange to be a human-resistance commander, combines r puppets, humans are just some random groups of simple people. Maybe they can be just like zombies - an AI-controlled faction, and combines (parted from their overwatch command - and that's why they are player-controlled) should defense some outpost (like in a ow_crossroads)

Awesome job! I have been waiting for mods like this..now we just need to get ValvE working on the MAC SDK..

really epic oO... of course you have my vote!

You just got me really pumped.

Daaamn, the final section of Breach looks epic. Loving the final implementation of the Strider.

your mod has changed so much compared to the last time I tried it, way back when dev textures were rampant. Your team should be proud of its progress and if it doesn't win something this year, at the rate its going by next year you will have MOTY

Aww the music is amazing! Love the mod and how much progress it's made.

Showing the dev process of the maps is brilliant. Really top-notch mod!

The reason I first looked at this mod was because of the amazing concept art, and I must say, you all are really making that concept art come to life. Really amazing work, I can't wait for those new maps.

Thanks for the great feedback everyone. We really appreciate it!

This is really taking off! Nice work!

Can you PLEASE add that music to the downloads?! And after seeing this trailer, I can almost guarantee that you'll win the MOTY Award ;D

That music is Oscar-worthy... O_O

Uhh..yeah...epically amazing? Great work guys and awesome soundtrack. I really need to jump back into an OW game soon...

really nice video and awesome soundtrack, beginning and end reminded me of infected mushroom a lot