Post news RSS On the ongoing zombification of Knox County

Greetings travellers. Time for a quick blogpost detailing the most recent zombie shenanigans of the upcoming RC3 build. It’s been a week of many and varied tasks for everyone on the team, so we thought we’d round them up in something of a cover-all blog – and knuckle down into more depth and explanatory videos later on this/next week.

First up is map streaming – which is looking to be entirely amazing, but is also the necessary cause behind the renewed delay to RC3. As we explained last Monday, the memory demands of Project Zomboid had crept up to worrisome levels – had we released in its former state many existing players would’ve had major problems getting it to run. As such some extensive surgery had to be performed. If you haven’t already checked out the results (with a hidden 400MB of memory saved) then you can check out our video here.

With this development Chris is now working on zombie spawning within the streamed world – he’s developing a system that will allow for accurate calculation of whether areas are accessible to zombies or not. In the background, meanwhile, he’s also working on getting rain switched back on – and also helped Andy and Mash with some tools to speed up map production for future updates. This is something that our modding community will be hugely excited to see – and will of course be made available to everyone in due course. We’ll release a more in-depth commentary on it later on – but this is what the new building design tool looks like:

Andy and Mash themselves, meanwhile, are busying themselves with new maps – and are in fact almost good to go with two new cells for Muldraugh. So, that essentially means that after RC3 we’ll be able to triple the size of the current zombie-populated map. One of them requires an increased density of buildings, however, which is where the aforementioned new map design tools are coming in more than useful.

Will and RingoD, meanwhile, have been conjuring up meetings with NPCs to add a little more variety to the current “Hey!”, “Screw you!” confrontations after RC3. When you meet fellow survivors we hope to provide some far more evocative and interesting situations – and we’ve already got a good few hundred variations on central themes in the can. Here’s a quick grab from one of Will’s writing docs. 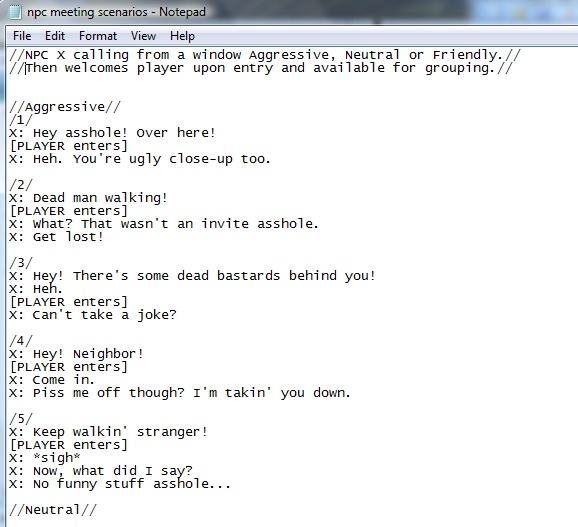 Finally Romain, the wonderful amazing and (quite probably) beautiful new addition to the PZ team, has been busying himself with some amazing new systems that will add to the realism of Knox County. We won’t spoil anything – but some of this involves two new moodles, the placement of the moon and accurate temperature charts of real world Muldraugh. There’s plenty more besides too.

As ever, apologies for stretching patience once again – but once we nail RC3 and the streaming system we’ve got a hell of a lot of content waiting to fall into the readied code. We hope that the internal creative surge we’ve got going on is at least evident to the world at large, and honestly can’t wait for you to sample it. More updates as they happen.

continue to do a good job so I am looking forward to tasting the new projet Zomboid and ummm ... what if I tell you is that you have thought out and something to steam

I think the single greatest aspect of this game will be the human NPCs. Not so much their lines of dialogue (though it is great) but the natural reaction to and from the main character.
Honestly from what I'm seeing this may actually topple Day Z as a true survival horror.

My sister got beta for that ;)
Anyway this game is going to be great keep up the good work

They should add all types of buildings Firefighters building,Police station, Hosptail,Clincs,apartment blocks and all so some bus stops

wow look so easy but take **** ever make hold story and lot of make 2 ending all move .Good job hope for get house builder thing look very firendy use