In today's countdown article we'll be covering the gameplay alterations to Crysis Wars. You will be able to test everything described here in the upcoming Oasis 1.1 tech demo.

Being a First-Person shooter, the usual camera setting in Crysis Wars is the first person perspective. Since we are developing an Action-Adventure, where exploring the game world plays an important role in the gameplay, we weren't happy about this and decided to implement our own third person camera system that supports different zoom modes and an additional aiming mode.

If you played our first tech demo you may have noticed an unpleasant behaviour of the third person camera inside of buildings - in fact the camera wasn't smart enough to change the distance to the player depending on surrounding obstacles, walls and the like. This has been solved in Oasis 1.1 (although there is still some room for improvement till the final release) so that you needn't fear to explore the interior of buildings or other narrow places in the levels anymore.

You want some video demonstration? Wait till Saturday (or Friday for the torrent release) and you can try it out yourself!

While Crysis Wars comes with an inbuilt mission system, the source code of it sadly isn't included in the SDK. Since our requirements to a mission/quest system went above it, we decided to design our own one from scratch.

During the development of Oasis 1.1, that includes quite a couple of quests with varying complexity, we were able to test whether the ideas on paper translated into a proper workflow when it came to implementing real stuff. Eventually we found one or two things that will be changed after Oasis 1.1 since because of the huge amount of quests open Outcast will have the implementation of them has to be as easy and reliable as possible.

Interacting with the game world

Most games today have separate key bindings for firing your weapon, jumping and using things or NPCs. The original Outcast used another approach: There was one single interaction key that changed it's function depending on the context. If you approached another character for example, a head icon would appear in the interaction indicator area of the HUD telling you that the action button would start a conversation. If your weapon was drawn, a gun icon would appear indicating the action button would trigger it, etc... 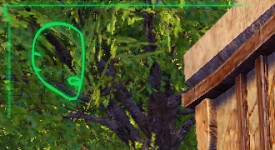 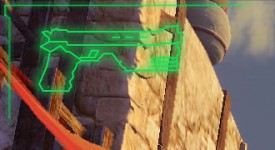 We liked this idea so there will be only one action button in Oasis 1.1 - the currently mapped function is indicated in the HUD as well. Jumping will have a separate key though, since we agreed that especially in the hecticness of a fierce battle accidently jumping instead of shooting can be pretty annoying. You see we don't simply copy-and-paste the gameplay of Outcast, but take the freedom to evaluate it, compare it with today's standards, and possibly even change it.

Oasis 1.1 should be an opportunity for us to get your feedback on whether we succeeded in creating a smooth and enjoyable gameplay while it still feels like a sequel to Outcast.

But I don't have Crysis or Crysis Wars!

No big deal, simply use the freely available Crysis Wars Trial to run Oasis 1.1 as described here. Oasis 1.1 hasn't been released so why bother about that already, you may ask? Well the demo is about 5.5GB in size and the additional patch is another 0.5GB. You may want to start downloading already so you can give it a try on release day. Still not convinced? There are still some countdown articles left... how about localization and Voice Acting?

This looks ace, me and my friends are all waiting on this.