Finished most of the major mapping today. Read on for more info and some screen shots..

Hello everyone, had a good week I hope? Well I didn't D: Yesterday I was supposed to release the map images, it was when I planned to anyway, but I re-learned that you should never plan for anything.

While I was compiling it for one of the final check runs hammer thought it would be funny to render my vmf file almost useless. Had to copy past the entire map to a new map file and replace around 900 of the entities in the map.. yeah not a fun day heh. But I survived it and the map is pretty much done.

NPZf1 is a beast of a different color compared to the other maps I have completed so far. This one took almost ten times as long to compile as any of the other npz maps (24 minutes) which surprised me a bit. As such it is not 99.9% done, it is more around 97%. There are some blatant issues that will be evident in the screen shots, such as the displacement mountain's alpha texture towards the top and in a few other spots.

I reworked the lighting from the slide I put up in the beginning of the week so the purpleness is now dead. It is a hazy kind of blue with a small amount of purple. This map is huge, I took 45 screen shots and ended up with 25 or 26 for uploading.

So on to some screens: 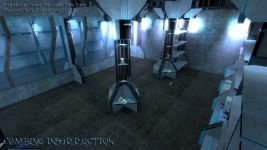 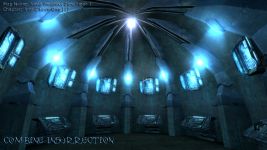 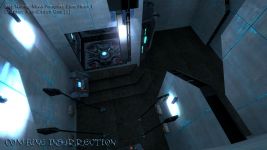 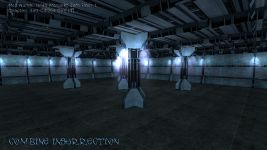 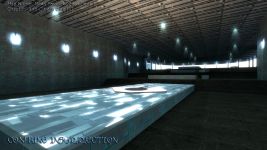 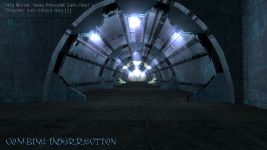 To see the rest of the screens, click on one of the ones above or visit our Images section. So with the finishing of this map comes the end of the maps I had over 50% finished. The desert map I am going to completely redo. I will from now on be releasing weekly updates, probably every Thursday, to let you know what progress was made during that week or if there are map images inbound.

Thanks for following CI!
Geowil.

Wow, Looks good, I love the one with the roof and lights ,The only thing I can say is, Lights brighter, Less Lights

I agree, your lighting has too little variation in brightness right now, making it look kind of bland. Fewer lights would make some parts of a room brighter and others darker. Also you have very interesting architecture, see if you can use it to make some interesting shadows. Do these two tings and I think your atmosphere will greatly improve.

i thought so too.
i came to see the laughing man.

this is good too.

Wow, everything looks great! Your mapping has improved by far!