Phase 3 submission for the Make Something Unreal Contest and Credits

Our phase 3 submission for the Make Something Unreal Contest is now available for download. It's probably time to thank the people that contributed to the project in some way. 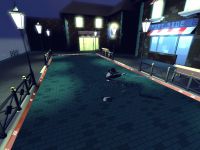 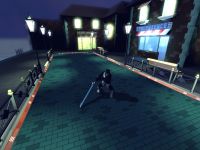 The Gametype name is a reference to a Spawn game developed by Capcom, called Spawn: In the Demon's hand. The game itself is a arcade shooter where you combat minions and bosses from the spawn series.

Downloading, it's been a while since I got a hack 'n slash game :)

I suggest reading the readme for this one. The controls take some getting use to.

PS. Need to do something about that moon in the backround, it could be improved upon. Looks blurry and has squares for clouds.

The pistol feels very weak and feels like it has a mind of it's own sometimes. Tapping one key repeatedly as fast as possible and doing almost no damage isn't much fun. Only suggestion I can make atm is improve the damage a bit and give it a burst fire effect. That way you have a second to lift up your finger and either fire another shot or attack with the sword, will make air juggling also a lot more pleasant.

Also can you add gamepad support?

The handgun was designed in a similar fashion to DMC 1,3,4 which decided that it was more immersive to shoot 1:1 with the players inputs, I'm inclined to agree. God Hand is another game that uses a similar mechanic with the "Pummel" function though that was more an animation speed effect.

As for the pistols damage, you're not suppose to abuse the range to kill opponents, by convention no Hack 'n' Slash has ever made ranged attacks more effective than the melee attacks.

If you're worried about the pistol juggling damage if you look closely chances are the shots are actually missing. It's an interesting artifact from the game code that you can only shoot straight, so in order to maximize the hit rate of the pistols you have to wait until they are elevated in front of your gun.

DMC2's Pistols had a double tap for a singular input and high damage, not the greatest game.

how do you launch this mod? ive spent 30 minutes trying to google "How to launch ut3 mod" but i still cant find it, can someone please help me out with this??

Technically Noontide is still a gametype not a Total Conversion which means it runs through UT3 and not a separate frontend.