The Company Of Heroes NHC Mod v2.700 is on it's way! New units such as the T26E4 Super Pershing and Sherman Tulip will be in this version. Many bugs have been fixed, including being able to be U.S. or C.W. as Axis and W.M. or P.E. as Allies. There is also information below about installing v2.602c into your Steam directory. It does work with v2.700!

NHC Mod v2.602c Information
-Currently, the latest version of the full NHC Mod is v2.602c, this version does work with the new v2.700 of Company Of Heroes. To install simply change the directory of the installer from the download. Here is what it should look like if you are using Steam:

Please double check the directory is accurate or else nothing will work! Then complete the installer and play the mod. There are more detailed instructions in the download.

NHC Mod Development Team Update
-We are working hard to bring you the next version of the NHC Mod, v2.700. This mod will bring to play new ideas, patches, and units. We have a lot of content and ideas in the works and are excited to have so many people supporting the mod.
-There is a new member of the NHC Mod Development Team, {HEROIC}Elite.
-If you have any questions, feel free to ask him as well.

Here are a few things specifically you can expect to see in the next version of the mod.
-T26E4 Super Pershing 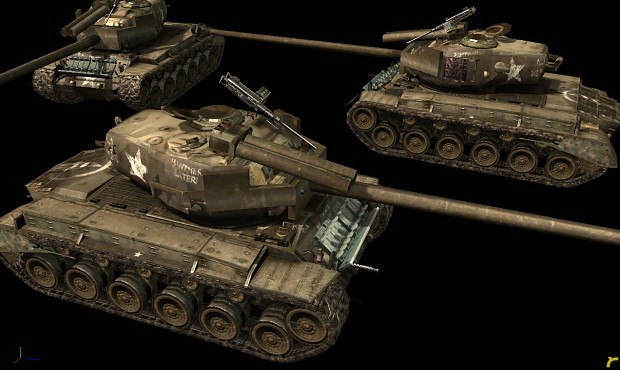 -Sherman Tulip
-Universal Bren Carriers
-Panzer I
-M3 Stuart with Quad .50 cal
-Any faction versus any faction bug fix
-The Maus VIII will be nerfed slightly to keep the terms more even
-Some other changes to costs and maps
-And More!

This makes me so happy! Thank you for all your hard work guys!

If you need some assistance due to the changes we did on EF for 2.0 in order to make it work with the combiner, let me know.

Thanks for the proposition. It takes time to update my target tables but honestly I just spend too much time just playing with the Ostheer :p

No problem. You have been a supporter of our mod for a long time, it is much appreciated.

Answer ASAP. I have downloaded the mod NHCmod v2.602c but i dont seem to have all the vehicles that are stated to be in the game neither do i have the no pop cap mode but i do have the infantry mode and early war mode. could someone please help me.

Please send me a personal message about this matter with specifications.

The NHC Mod v2.700a is set to release on Christmas, there have been some setbacks but the next release is scheduled.

NHC 2.700 when available? because I'm impatient.

The NHC Mod v2.700a is set to release on Christmas, there have been some setbacks but the next release is scheduled.

and the machine gun in tank so weakly.

I think you need to increase damage Like Realistic.

He will not do so, If you're looking for realism go to Blitzkrieg or Europe at War