It has been a while since our last update, but rest assured the team have been very busy behind the scenes and could not leave you all waiting any longer - so we thought we would share one of the more infamous objects we've created to bring the levels of Traction Wars to life.

It has been a while since our last update, but rest assured the team have been very busy behind the scenes and could not leave you all waiting any longer - so we thought we would share one of the more infamous objects we've created to bring the levels of Traction Wars to life. 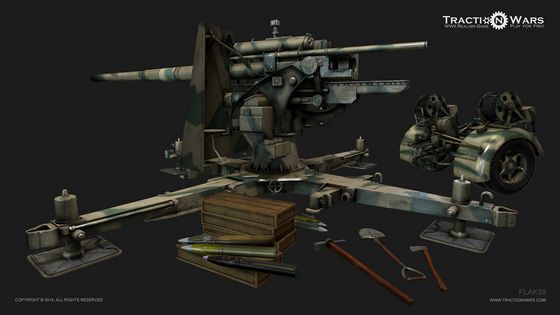 The German 8.8cm Flak 36 is rightly considered to be one of the great artillery pieces of history. While never as powerful or long ranged as its Allied and Italian counterparts, the Flak 36 made up for these deficits through deft training and deployment by the German Flaktruppen and fearsome accuracy. Whereas other nations were content to allow their large calibre, high velocity AA guns to serve purely in an AA role, with ground support forbidden until relatively late in the war, German doctrine was to make full usage of Flak cannon as effective ground support weapons. Beginning service in the Spanish Civil War with the Condor Legion, it was quickly realized how effective an anti-aircraft weapon could be. An AA cannon's need for high velocity, long range, and hitting power matched deletions the same requirements for anti-tank cannons. The Flak 36 was soon finding itself more often employed in support of Spanish troops than fending off Spanish Republican bombers. By the early years of the Second World War, the Flak 36 continued to cement itself as the only anti-tank gun in the German arsenal that could cope with the heavily armoured French and British infantry tanks at all but point blank ranges, penetrating 86mm of armour at distances of 2,000 meters. 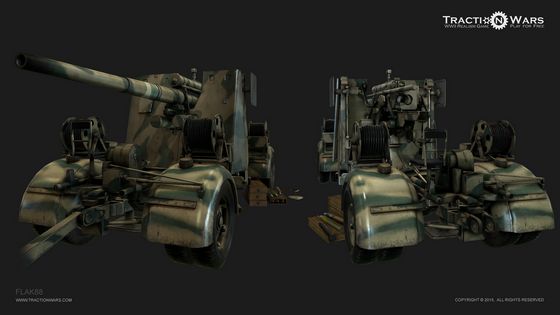 While the Flak 36 proved capable throughout the war of destroying enemy tank formations, one of the crowning achievements of any Flak battery during the Normandy Campaign was recorded by none other than Oberst Hans von Luck of the 21st Panzer Division during Operation Goodwood. There a Luftwaffe Flak battery found itself, by pure accident, placed directly on the flank of the advance of the 11th Armoured Division on Cagny. Under von Luck's orders, they proceeded to open a galling fire on the British tank forces. Knocking out between 40-60 tanks during the course of the battle with zero casualties to themselves, this single battle of Flak 36s was crucial in disrupting and destroying the British advance on Cagny, and inflicted such heavy casualties on 11th Armoured that the division had to be pulled out of line for a full refitting. Such was the massive impact the Flak 36 could achieve when well led, well placed, and with just a bit of luck.

Interested in joining the team?
The team is currently looking to recruit 3D Artists in addition to a couple of other areas. If you have experience in game/mod development and are interested in being part of our friendly and professional team then please head over to our recruitment page for further details.

For the very latest media and updates follow us on the social networks below, as well as our community forum and our media gallery.

What a lack of respect to not even try to be understood by the person you're writing to (there are excellent online translators), and full of spelling mistakes at that. Useless comment!

That is seriously sexy. Just got back from drill, and I already had a serious war boner. Your 88 just drove the hammer home, and "finished" me.

I love all of this. When will you release?