Hello and welcome to another update from the Traction Wars Team. Since August the team has seen several new faces and we've been hard at work in-game so finally we feel its time to announce the first of several maps which will be released in OVERLORD.

Hello and welcome to another update from the Traction Wars Team. Since August the team has seen several new faces and we've been hard at work in-game so finally we feel it time to announce the first of several maps which will be released in OVERLORD.

We have welcomed several developers to the team since News Update #17 back in August. In chronological order we would like to welcome:

We look forward to showing some of the work they have been working on in the months to come.

We take great pleasure in announcing the first of several maps which will be released in OVERLORD. Lebisey is being developed by a group of TWDEV mappers which we have dubbed "Sword Team". Lebisey is not yet finished but we now feel able to share a couple of screenshots to give you a taste of the beautiful country setting in which the fierce battle took place.

The 1st Battle of Lebisey Wood began on D-Day, June 6th 1944. British soldiers of the 3rd Division and tanks of the Staffordshire Yeomanry attempted to push through what was thought to be light resistance towards Caen, the British Army’s objective for the day. Unknown to the men of the 3rd Division, the German 21st Panzer Division had strongly fortified the woods and the town beyond, including turning an irrigation ditch into a large anti-tank ditch in front of their positions. The attack failed spectacularly, and multiple attacks afterwards ground to a halt in front of fierce resistance by the 125th Panzergrenaidier Regiment, backed by artillery and Panzer support. After several days of fighting, in which many British tanks fell prey to a certain dug in Panzer 4 that had been disabled early in the battle, the front settled, and would remain stuck in front of Lebisey until a month later. Caen would lay out of the reach of the British. 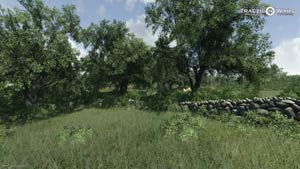 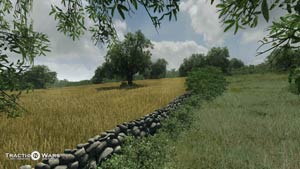 We would also like to share with you a short poem by one of the soldiers who fought at Lebisey:

When you've landed on the beaches,
And you've driven Jerry back,
When you've bashed on through the breaches,
And the guns burst with a crack;
'Tis then you suddenly realize
War's not a game you play,
It's a one-way ticket to Paradise,
Hope for another day.

The team is looking for new developers to join, so if you think you would like to contribute to the mod, please visit our recruitment page for more details.

Until next time be sure to check out our community forums to comment directly to the team on each update (no registration required), post suggestions and become part of our rapidly growing community. Alternatively you can join our Facebook or Steam Community pages or follow us on Twitter.

We've put many hours into Lebisey, and I'm confident that once it's finished it will look stunning.

We appreciate your support when being eager, but unfortunately we want to keep you all tempted and thus we might show more on a later stake *me thinks*.

Hehe, sorry for being a douche, Fred!

Amazing work guy's. I am shure if it will come out, this will be the best WW II conversion for crysis. Ww II on Cryengine... looks promising.