Sorry for the slightly delay on this update (I'm hoping to do an update every sunday) but I had a very busy weekend!

SO! What has changed in the mod since the release of the tau?

We'll cover the Space Marine first. After a lot of requests for a vehicular version of the Space Marine which I was hesitant to consider, I decided to create a prototype Space Marine who would be impervious to small arms and incapable of lying down and such things that you guys wanted. Here he is: 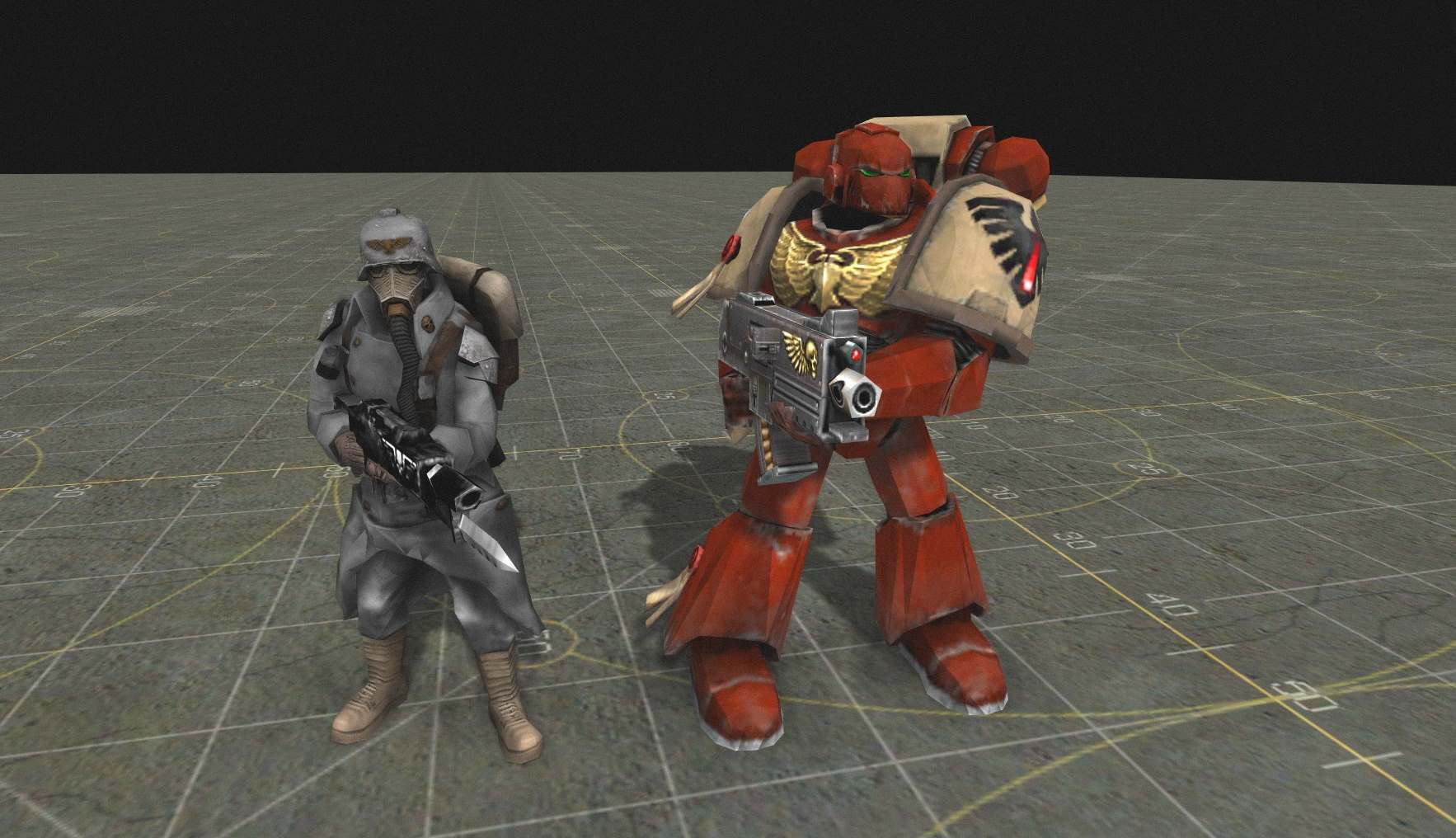 The Krieg Guardsman is reference for size. Now the first thing you'll notice is the pose. This is fixed and he has no idle animations, unlike the Battlesuits, because his gun and arms form the turret part required by the vehicle model, if this were to be animated then he wouldn't be able to aim properly, and his shots would spray all over the place. Without the turret, he would have to turn on the spot like a SPG to fire his weapon at a different angle.

He is however completely impervious to Lasgun fire and too an extent bolter fire. You need a heavy bolter or stronger to take him down. This has upsides and downsides, obviously it makes him more "Space Mariney" but also means if you set two of these to fight head on, its a total stalemate. If I weakened the armour anymore he would be destroyed after 2 or 3 bolter rounds, which is not what I'm aiming for.

Lastly, he no longer lies down. Or crouches. Or does anything at all except walk on command. And he can't get in another tank. He's actually pretty boring. I'm unable to get a complete range of human movements nailed down into animations because I'm just not that good at animating. So for me, this represents pretty much as far as any Space Marine as a vehicle can go. he is functional as a bulldozer provided the enemy has no special weapons, but he dies pretty quick when they do, when the original entity has a greater survival rate because he can do a bit more hiding. Of course other people may be able to take it further, but it's not my speciality.

The up side is this has paved the way for the terminators and the dreadnought, who will utilise a similar turret system. I'm hoping they will give much better results.

Onto our BIG change. I give you, the Legio Titanicus. 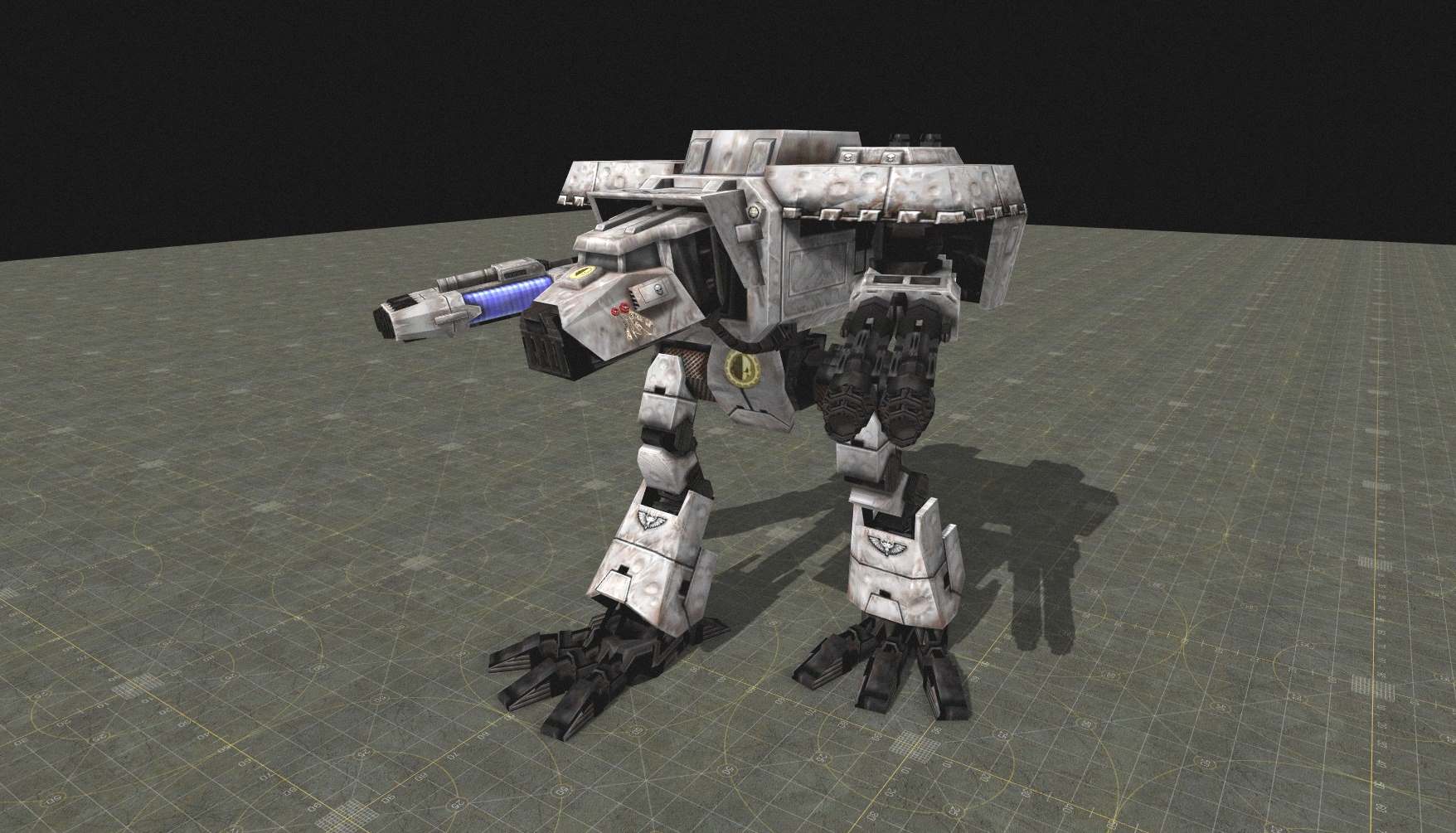 This fellow has been imported from the Ultimate Apocalypse mod for Dawn of War. He is currently subject to permissions by the mod developer and may not actually be included in the update, but I am confident they will allow its use in another mod like the other mod developers have. Currently this is the only model Titan in the game, with working Plasma Blastgun and Turbolaser Destructor, but the Mega bolter variant is on its way very soon.

I hope to also add the Reaver, the Warlord and the Imperator from the same mod, all permission depending. Here you can see the scale of the Warhound, which is only the smallest titan: 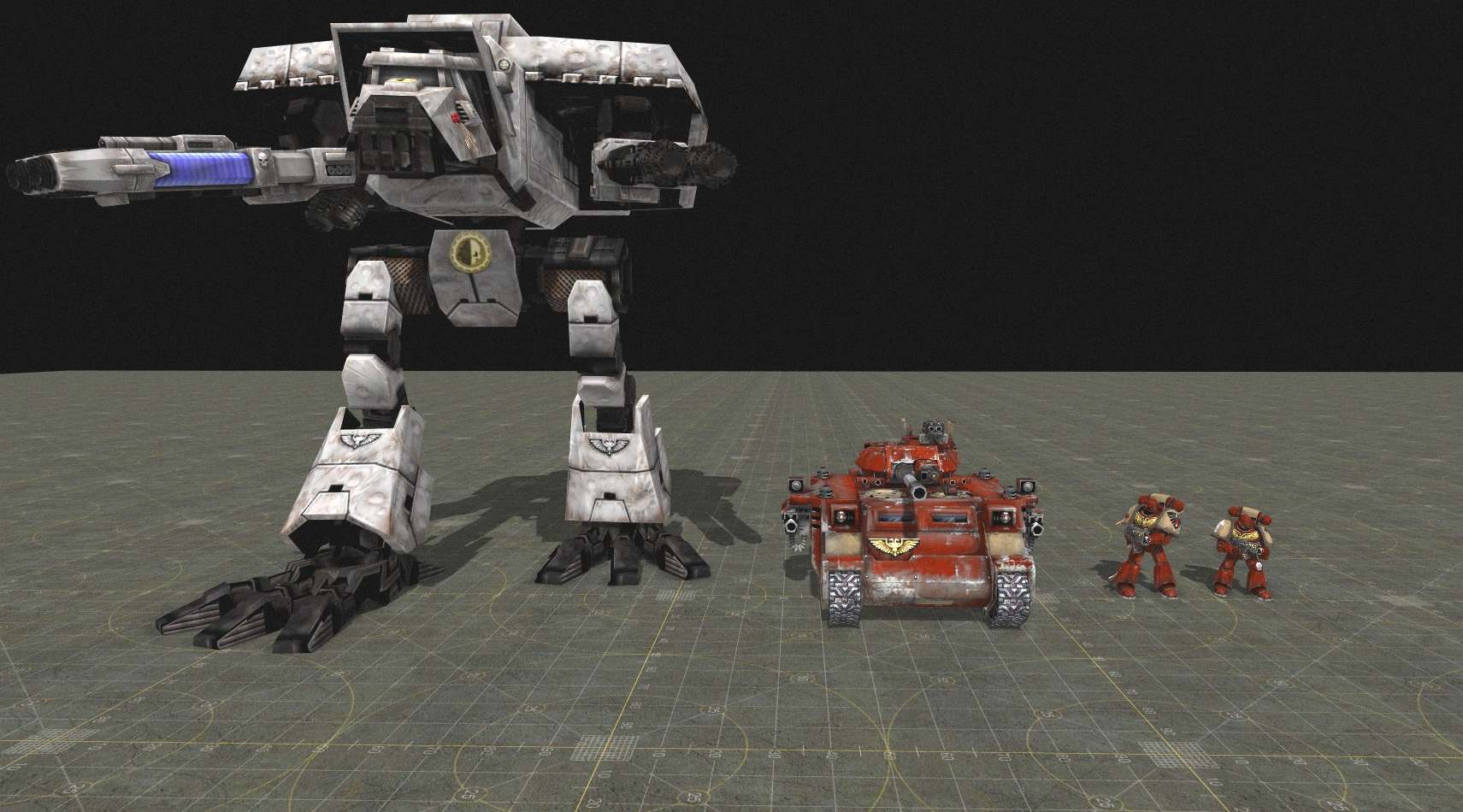 He is quite a beauty, and shreds most armour with ease. Soldiers evaporate under the touch of the Plasma Blastgun. There is even new FX for the Blastgun.

And last but not least, I want to open the new Race vote system. Considering how well the last one worked, I'm going to follow the same system.

There are 3 Races to choose from, reply in the comments which race you want to see in the next update.

On a side note, The Tyranids and the Orks are two big races being skipped for now due to their heavy Melee focus. At the moment I am unable to do melee justice and these races will be re-visited when I feel confident that I can do so.

PLEASE BE AWARE VOTES FOR OTHER RACES ARE DISCOUNTED!!!!

On that note, it's time for me to leave you guys and get back on with work! Any questions and comments please leave below, thanks for taking the time to read all of this!

Would love to see some Necrons in this mod. DEATH IS INEVITABLE!

Necrons would be pretty banging

Need to add Orks ASAP but I'd say Necrons for the next. The imperium definitely need more things to shoot at.

Necrons would be awesome to see ^^ i'd let them fight against the death korps of krieg!

Just wondering, can't you just bump up the health of Space Marines, Chaos Space Marines or heavy infantry to overdrive for that matter and include restrictions to proning? Sorry if this point has already been raised.

I may not be that familiar with the lore but I'm pretty sure power armour isn't impervious to lasgun fire. I read somewhere that it's the sheer volume and concentration of lasgun fire that actually allows such the penetration of armour.

Would like to vote Necrons mainly because they don't get enough love in other games.

The health has already been raised but prone cannot be prevented. I personally dont have an issue with prone, i take the stance that any soldier worth his uniform would rather not take the chance of standing instead of taking cover in sustained fire regardless of whether or not his armour "should" be able to withstand it. However other players believe that space marines put faith in their armour like they do in the emperor, which i cant really argue with.

What would be cool is to simply limit the tendancy of the AI to go prone. This is especially true for SMs, but for other races too. I mean, WH40k throws realism off the window for every race, right ? Would it be possible ?

This is not possible without re-coding the entire AI.

Would love to see some Necrons next.

Awesome work man, the Warhound looks amazing. On the note of the melee if you haven't seen on the gem editor group Sonne2 released his MLG 2.0 mod which does include his script for a decently functional melee system In MoW. Figured that might interest you up for the ork/nid units.

necron will be pretty straightforward. eldar or inquisition force will be more interesting, adding more diversity.

i vote for inquisition force.

(not to mention that with men of war engine you ll see running and proning necron... no thanks)

Necrons will be done as vehicles so will not be going prone :)

Just to put it out there, doing the ncrons as vehicles sounds like a genius move, if you could do it that they have 'bits' blown off and then 'reformed' when repaired that would look terrifying!

That would be increadible but hard work, thanks for the idea though it may be very possible.

The big black and green robots.

As a side note: THE TAU ARE OP.

wait for the update and kick them with the Titan ;)

Necrons! My favourite race in Ultimate Apocalypse. DoW II (nearly) excluded them, so it would be awesome to bring green-coloured death and destruction to every living thing in MoW.

Id like to see the Eldar next, but it looks like the necrons are more popular. I'm happy either way :)

Eldar will be the easiest to add, and probably the most fun.

Speaking as a 40k lore nerd, Necrons aren't something that you really fight every day so for me Eldar would be cooler / more immersive. But it looks like Necrons are winning this one! Cool either way.

What an awesome mod you've made! Please include the Eldar next!

I'd love some necron after all the issue are fixed ! And maybe multiplayer ?

Necrons gets my vote