Birthday sale went better than expected so as promised we will add one new weapon so which one would you like to see in the final game ?

Which weapon do you want to see unlocked as achievement in McDROID:
1- Sentry Gun
2- Mutagel Vat
3- Thumper

The sentry gun is a gattling gun on a tripod, a la Aliens but with infinite ammo so you don't worry about that rolling counter. Deploy once, anywhere on the map, it's repairable.
The mutagel vat is a factory that produces mutants. It implants a control rod in their nerve stem so they fight for you. Deploy once, Long range of action, walks in corruption happily but bioid cannot be repaired.
The Thumper is a thing that hammers the ground rhythmically causing sandworms to attack it, uh I mean mutants. Perfect decoy ... so don't get attached to it.

Here are the concept sketches. 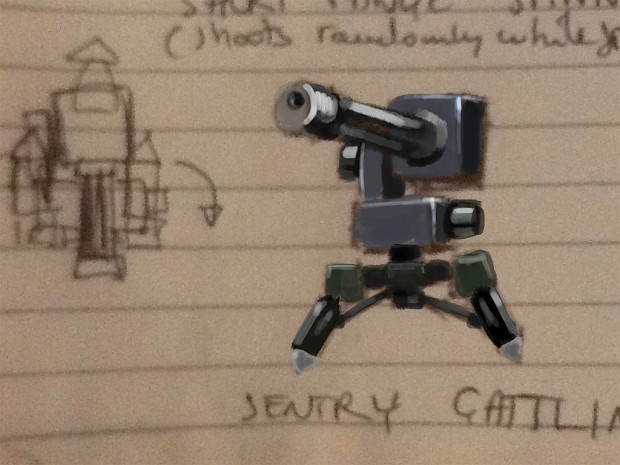 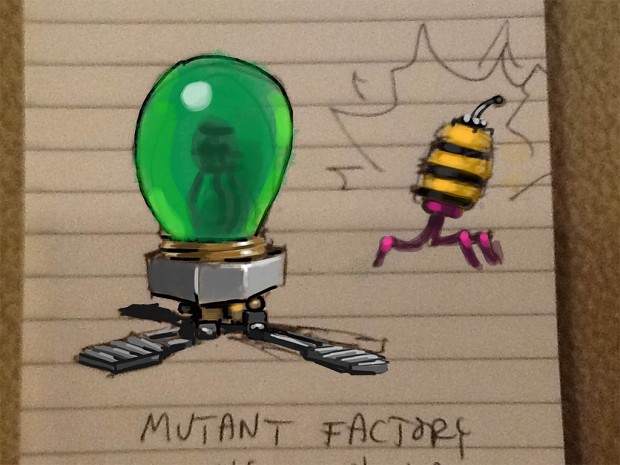 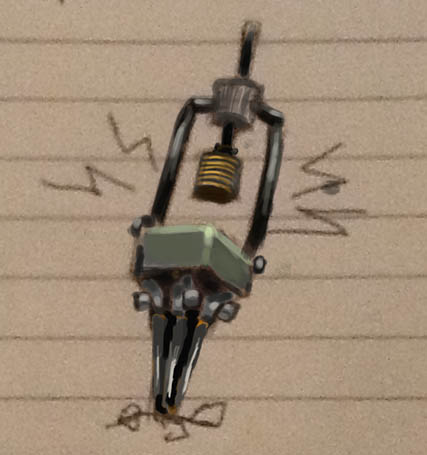 The choice is yours !

My pick would be the mutant factory

Hi, all of them would be best of course, otherwise my vote goes to the Sentry Gun. Keep it up!

all
of
them :D

Mutagel Vat sounds the most interesting to me.
Second choice would be the thumber cause it would enhance strategic choices

The mutagel vat sounds amazing! I totally want that one over another gun!

I'm having a really tough time deciding. I like the idea of the mutagel but I also want the sentry gun.....I'd be fine with either one XD But, for now (unless I change my mind later I guess) my vote goes to the sentrygun. But.....I also want to vote for mutagel JUST as I typed that. Oh, I'll stick to the sentry as my vote. :/ I'll be hoping between both otherwise. I do like the idea of the thumper too, I just like sentry and mutagel more.

Gattling gun please. I've been playing the game all Xmas and All I wanted was the lasers to be gattling guns.

/me throws in a vote for mutagel as well. like others have said, gattling guns would be fun, but they wouldn't add any new strategic elements to the game

How would mutagel offer more strategic choice than say factory ? What do you see the vat doing.

Mutagel Vat would be good, though all of them would be even better

To be honest i can see multiple NEW strategic uses for a gattling gun so i don`t undestand some of the above comments :P (as i understood you can put gatling gun down like the sentry robot - good for defending those berries where there are no turret points.)

The mutagel vat is my vote. I can see future strategies with it.

Mutagel sounds cool and story wise it fits (you'll see) but what new strategies do you think of ?

(I'll be tuning the AI soon so if your strategy is cool you know what will happen ...)

Sorry for the late reply.(I've been playing too much McDroid)
The mutagel vat can be used as a defensive deployable for example to defend the shuttle or a plantation.This can be done with the sentry gun BUT it has a limited firepower and range.

I think it would be interesting to see how people put the elements of the thumper and the mutant vat to games rather than just more guns.

What new strategies do you guys imagine with these deployables ?

the thumber could lure enemies away, or into some oil barrels or into a large mass of turrets in a remote place (could be a nice level idea)

I really like that scneario because it's simple and makes use of the mechanics we've seen before so I want a thumper now !
We'll look at the technology behind that because it needs to work in co-op as well.

(feature creep before release - not recommended but so much fun :)

The sentry gun could definitely open some strategic options, since you can only build turrets on the yellow pedestals, the turret would allow some sort of defense to put up anywhere on the map. Definitely has my vote.

Any other strategy despite pew pew off the beaten path ?

Well, the mutant factory would allow you (if I get the concept right, that is) to build up a large army of free mutants. Yes, you have to spend a (probably) big sum of money on the mutagel vat, but once it is deployed and you repair it enough for it not to be destroyed, then that would be a very efficient source of defensive and offensive forces. It would be super sweet if you could actually give them a waypoint they would follow, so as to command these little creatures too.

I abstain and present another-

Suggestion: A placement that gives bonuses or abilities to nearby little roboty minions, whatever they're called, based on the type (and number) of other placements within a certain proximity.

Apart from that, I'm waiting on content. And another thing (!), it looks like a massive chore to work up to the quantities of diamonds required for further upgrades, post-missions. The figures are too high.

Confused by your suggestion (and how many times will I have to write this text - come on internet accept my reply!) can you share with us your coolest scenario ?

The minions 'turret' you can place, the little robot dudes it generates. You included them for a reason, hopefully it wasn't just for diversity! The player could decide to sacrifice a nearby turret placement to put down a new 'turret' that buffs the little robots. In very general terms, the player loses the advantage a turret provides and gains further strength in their roaming, robot force. They strengthen whatever unique aspect those little guys bring to the battlefield, that which is the reason you included them in the game.

I've had momentary, superficial thought about this idea. I haven't got a characteristic scenario to frame the new unit within. You'd be better at that, knowing the game inside and out as you do. I've just given it the summary, strategic thought. It adds another dynamic and element to balance out.

As for what specific buff would be applied, that could be one of many. Take your pick. Random choice of the day: a tesla effect that causes enemies attacking your little robots to take damage. Electric thorns.

I hope you can find your way through this reply of minimal substance.

If you're ever actually short a real, integral idea, throw me a message. I've got them coming out of my a.. I've got plenty and can develop them further than this fleeting instance.

We're testing more elegant ways to give players value than cramming levels because personally I can't stand boring same-crap levels and prefer quality over quantity :)
We'll show something soon, you guys may like it.

I vote for the mutant factory.

- i was thinking about placing the sentry gun in a remote place next to the expected monster path (best some narrow passage)
- placing on green grass ground where there are no normall turret place holders
- maw down the enemies!
* i hope it has awesome firepower and range.

but for now i mostly want RAIL.... pretty pls :D

Oh, and btw- i don`t think diamonds drop rate is too low. As far as i know you can get 100+ each run when making lvl 7 challenge.
Grinding diamonds makes the game fun after finishing all teh maps in regular mode.

Yeah good to see that strategy works because we started doubting of our approach : if you want diamonds you gotta do challenge and nightmare.
That said I smoothed the diamond price so at least casual players can enjoy mk2 of each module.

Yay, thx for the update! The new map is cruelly HARD but maybe it`s just the fact that i suck :D

We try to make each level unique with at least one new approach to solve it, this one has 3 key ways to solve one being using the rail early and turning McDROID into a mobile battle station ;)

not that hard afterall ;)

Love the Rail. Never expected it to have TWO ADDITIONAL turret points. This is ownage :D and actually adds the most strategic options/ways to build the Droid (should you be a walking armageddon or rather a factory, etc)
It would be nice to be able to put down the "railed" turrets but i guess limitting this has it`s reasoning ;)

BTW i have played my first coop today, it was cool!
Only thing i`d like changing is maybe to have the messages from other players appear more noticable, i tend to miss them during the heat of the game :)

Wow ! So good to see you figured out the Rail potential !!! Have you tried carrying 3 factory mk3 ? with all the robots following you and zapping everyting that moves. it's pretty wild.

Yes agreed on the chat text, can't read it either, we'll change that.

And welcome to the wacky world of co-op, now it is very stable, let's see if people start enjoying more.

A little short bleep sound in a popular game I won't name does the trick for me, I instantly am aware of an incoming chat message. If people are offended by the sound, they can simply turn it off in the options menu.

It will be costly as hell (2k strawberries for 1 max factory :D) but i can imagine the carnage :D

Totaly by the way- how about dividing the collected strawberry pool into half between players (or implementing a forced upgrade/build turns for players) in coop? Or maybe turret build ingame voting system ;)
What i ment is (yeah, i suck at describing things :D) that nowadays people often disconnect or kick other people from the coop games due to the fact that the strawberry pool is not divided (in other words other people use the strawberries they wanted to use for upgrades :))

Yeah man ! 3x mk3 factory requires going to challenge I reckon, let me know if you manage that in Challenge because I want people to go Berzerk with this Rail, RTYPE style.

Regarding Co-Op, can you elaborate what the experience is and the thinking behind kicking someone. I created a forum on Desura, you can start a thread if you want.

Thx for replying, i have made a new topic on the forum ( Indiedb.com ). Not sure if i am more clear there though :)

Please let me know if more clarification is needed, i know i can be vague sometimes :P

Regarding the Rail, i`ll try to play with it more today :)

Hehe, these are temp placeholders so don't get too excited yet ;)

So we tabulated and as you probably already saw in the new build the Sentry is in and so is the vat - for now. I personally think the thumper is more different and therefore more interesting, we'll see about adding it after the release :)

thumper looks nice as well i just don`t like spending hard earned strawberries ;) for an object which will be destroyed by the strawberry looters ;)