Custom sprites and projectiles for all 8 United Empire weapons have been added to Sonata. This article traces the technology and evolution of UE kinetic weapons. 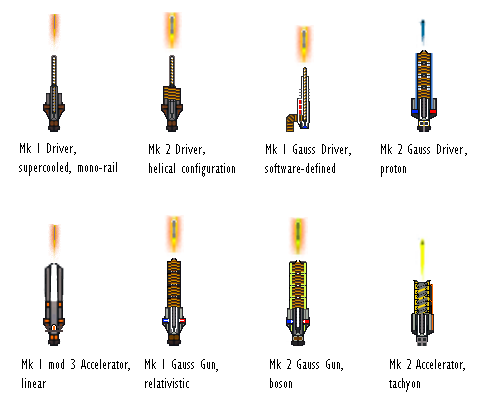 Much like the Mercator projection is a solution for rendering a 3D globe onto a 2D surface, in Sonata, dozens or even hundreds of years of technological development are rendered into a set of weapons at one point in time In Endless Space, for example, weapons are researched as you advance through time. I'm a nice guy, so you get ALL of them.

Believe it or not, kinetic weapons represent the best bang for your buck even hundreds of years into the future. Mass-y objects, when fired at realistic space combat speeds, often carry far more kinetic energy than a particle weapon using the same amount of power. Humans, a very pragmatic species, have maintained kinetic weapons in their front-line arsenal.

However, chemically propelled weapons - "sluggers" - have a number of disadvantages. They generate heat when fired, require complicated loading and extraction mechanisms, and require bulky propellant. There are many solutions to these problems, including caseless cartridges or the liquid explosives used heavily by the Sower. The United Empire military has long since investigated and mastered these technologies, but prefers a more...elegant...solution.

The Mk 1 mod 3 Accelerator, linear is about as standard a railgun as you'll find in space. Over a decade of heavy front-line use, the United Empire military has of course refined the design - hence the "mod 3" designation. Basically, an electric current is run down one rail and up the other, with a sled carrying the projectile completing the circuit in the middle. It's counterintuitive, but the net magnetic field created by this current is at a right angle to the barrel, and this creates a massive force driving the projectile due to something called the Lorenz force.

As with any weapons technology, there are drawbacks. The sled generates a lot of friction when fired, and needs to be retracted after every shot. The rails erode, and there are immense forces pushing the rails apart. The Mk 1 Driver is a modification of the standard railgun concept in which the rails are mounted much closer together and the sledless projectile surrounds them. This allows coolant lines to be run through the rail assembly, as well as a reduction in friction and stronger construction. The rails are closer together, which drops power, but the increased firing rate provides other advantages.

After some decades of development, however, the United Empire seemed to reach an upper limit in the power of their railguns. Military intelligence agents noted, however, that there seemed to be no similar limit to the power of Sower armor or Sophon shields - a new weapon was needed.

The Mk 2 Driver was the result of a "black" UE crash program to upgrade destroyer lethality. Rather than using rails, the helical driver is more akin to a coilgun. The Lorenz force is out, and the propulsion mechanism is simpler, but there are a lot of problems when trying to drive REAL power. As a prototype weapon, the helical driver is not much more powerful than the Mk 1 Driver, but is able to fire even faster. The United Empire grew addicted to the lack of rail erosion or friction from the projectile, since (due to the coil) it can now easily be suspended electromagnetically. The Mk 2 Driver was far from a perfect weapon, but it set the tone for all of the Empire's future weapons development.

The Mk 1 Gauss Gun is a weapon as synonymous with the United Empire as the M-16 was with the United States of America, or the Ak-47 with the CCCP. It is, quite simply, several coilguns mounted in sequence one after another. Although this refinement might seem obvious (and it was), the weapon is a technological triumph. Power conduction, firing sequence timing, and circuit hardening posed immense problems that were only overcome by the application of the United Empire's massive military-industrial base. This weapon is now the standard armament of almost all Empire vessels capable of fleet action.

A civilian software engineer noticed that the principles used to suspend a Gauss projectile in the center of the barrel, and the principles used to propel it, had much in common. In his free time, he created the prototype of a weapon which thousands of IHTG traders can now thank for saving their lives. Almost all medium turret weapons in the Empire merchant navy now use the Gauss principle. Where a massive, straight-line weapon was previously necessary in the Mk 1 Gauss Gun, the Mk 1 Gauss Driver has been modularized such that power generation, aiming, and even parts of the weapon's barrel no longer have to be colocated.

At this point, the UE is comfortable designing weapons using basic implications of the Electro-weak theory. Although the fundamental forces of electricity and magnetism had been unified by the electromagnetic theory since the early 20th century, it took until the late 23rd century for the Weak atomic force to be unified with electromagnetism. In layman's terms, this allowed the partial weaponization of bosons - force carrying particles. The first stage - a baby step, really - was the development of the Mk 2 Gauss Gun by an Empire skunkworks team. Utilizing all sorts of miraculous Treknobabble, the force carrying properties of 'Z' bosons are used to increase the already stratospheric muzzle velocity of an otherwise-stock Gauss Gun. Although these weapons were considered a stopgap, they are not uncommon among Empire forces.

This would be the chronological point at which the Sophons' ears perk up (do the Sophon even have ears?) and notice Human weapons technology. Of course it is crude by their standards, and even the most arrogant Human scientists admit that the Boson Gauss was a sophomoric effort. To paraphrase an 18th century Human naval hero, however, the Humans had not yet begun to fight.

Shit gets crazy in the heady realm of particle physics - and, as any programmer will assure you, in 80% of all source code. It was a government-driven collaboration between physical and computational scientists that created the Mk 2 Accelerator, which represents THE weapon that scholars point to when claiming Humanity's place among the greatest scientists of the galaxy. Few know how it works; it's top secret. What IS known is that the term "Mk 2 Accelerator" is a misnomer, a name chosen to confuse enemies, much like the "tank" in the early 20th century. It fires tachyons, and is known to be exceedingly deadly, although there are rumored to be causal side effects after each firing.

One of the most powerful human weapons never developed the air of mystery enjoyed by the Tachyon Accelerator, perhaps because many confuse it with the Mk 2 Gauss Gun. That would be a mistake, as the Mk 2 Gauss Driver uses substantially different and more sophisticated technology. Although unification of the Strong Force still eludes all known races (except, perhaps, the Sophon), the Empire has managed to weaponize it.

I shit thee not, the United Empire would figure out how to weaponize a goddamn vineyard if they thought it would help them throw a better wine tasting next Thursday. Humans love to fight.

The Proton Driver, as most civilians call it (because its military nickname is far too phallic for polite conversation), represents an evolution in the Gauss Gun's projectile rather than its firing mechanism. For decades, Empire weapons simply fired slugs of dense metal; at the speeds we're dealing with, explosives actuallyreduce the damage potential of a given mass. That is no longer true; creative fusing technology, miniaturized particle generation, and hilariously advanced algorithms are used to convert all atoms in a radius around the projectile into Hydrogen on impact. In layman's terms, this is magic.

Only a human would then light the Hydrogen on fire. That's just a dick move.

Guns look good, and the lore sounds credible. But to be constructive. Don't make news posts with a massive wall of text. You have over 1200 words in that post, with one picture right at the beginning. Explaining lore/mechanics is a good thing, I like that you have put that much thought into the depth of it. Try breaking it up, don't just precede your post with an image, cut it apart and use it to support your explanation. You have great art! Use it to your advantage!

Thanks for the tips, buddy. Next time I'll post I'll spread the pictures throughout the text, and try to be less wordy. I personally think that depth of thought when it comes to technology and geopolitics is absolutely crucial for the story of a game or mod.

I'm actually surprised at your kind words about the art - I'm not an artist! Everything in Sonata is starting from square 1, so hopefully it'll get better in the future.

I absolutely welcome your comments and reviews on any of my material; this is my first released mod, and I'd love for it to be as polished as possible.

My ideal would be a multimedia post - centered around a video - but sometimes you just have to put that work out there. Hang around, big things are coming for Sonata!

I understand completely! I'm tracking, but yea your absolutely right about the depth of the story, I hope you include some kind of Mass Effect-style encyclopedia in or with the game! I spent hours just listening and reading those articles getting caught up in the lore of the universe! But then again I'm a sucker for that stuff!

I'm just trying to help you make the most out of media posts ;) I know how hard it is to make art (as a non-artist myself). Don't be to hard on yourself though, we always want perfection but in doing so we underestimate our results. Your weapons actually can work very nicely in game as long as the rest of the art keeps the same style!
Looking forward to updates!