Sanctum Alpha 3 has now been released to the public! We've also put together a 6 minute gameplay demonstrating to show off the basics of Sanctum to everyone interested. Even if you do not have a chance to play the game itself.

Yes, so the latest alpha version of Sanctum got released a few days ago. This is basically the same version as got submitted for the Make Something Unreal Contest phase 4, but with the addition of multiple bug fixes and other minor improvements. 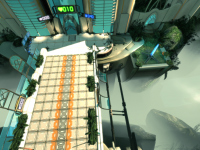 Sanctum has progressed a huge deal since our last Alpha release in early June. The basic gameplay has been altered and improved in many different categories. Including a fully dynamic maze-building system, additional defensive structures and new enemies. The information available in the form of in-game displays has also been greatly improved to make the game much easier to understand. And this leads us to the second point.

We've now put together a longer (About 6 minutes) demonstration of Sanctum. Showing off actual gameplay. It hastily but quite precisely demonstrates how Sanctum works, showing off features like:

This video is of use for anyone interested but is mostly focused towards people that are unable to play the actual game for themselves, but who are still interested in the product. The video is in no way a complete manual for the game but instead clarifies the basic features.

We're happy to hear about your feedback and if there is interest in more of these kinds of videos or if you have any better suggestions or requests. And for this purpose we've also opened up the Sanctum forum, available on our project page: (Sanctumgame.com)

We invite you all to share you experiences and suggestions you might have on your mind. Or just speak freely about whatever you have experienced or thought about, relating to Sanctum.

Just watched one of the videos, very cool defense mod!

does this have co-op?

We're working on implementing co-op right now actually :) So the short answer is No, while the longer answer includes an explanation about co-op definitely being on the way but until now there has been much more focus on the core mechanics and content over additional features like Co-op.

Expect a co-op version in mid November. Around the deadline for the Grand Finals of Make Something Unreal Contest.

Can only get to lvl 11 then it becomes impossible.

Those lighting towers are too expensive, slow and doesn't do enough damage for their price.
The normal turrent glitch now and again where they just don't shoot at their targets or just takes too long to turn.
There's also an issue with their range, If you plant two turrets on each side two blocks away from the edge, one will be able to shoot the enemies, the other one will just stand there.

The mod is still in an alpha stage and we've had some issues with the turret AI, as you describe. The game is however quite beatable and it shouldn't be "any bigger issue" getting past wave 11 if you just come up with a working plan and do quite a job with your hand-held weapons.

We will keep improving everything to get it working better and better, but it takes time together with everything else that has to be done.

How many level are there btw?

There are 15 waves right now :) Expect that to be increased by a fair bit in the next release.

Good luck and keep on mazing!

Just a samll note, it's really hard to see when your gun is busy overloading, in the shadows you can see it clearly, but in the light it's mostly guess work. You could use that little circle thingy on the gun to indicate when it's overloading.