New renders released of the LAAT/i Gunship for the Republic Faction. Also check out our new forums by following the link on our mod's page or in the news post!

In addition to adding multiple renders of units such as the Jedi Plo Koon, animation shots of General Grievous, and our new Clone Trooper, we've been hard at work making our new forums look and feel like a good Star Wars forum should. So head over to our forums here and post your comments, thoughts, or suggestions for the mod!

Furthermore, we'd like to show you a render of the LAAT/i Gunship, which can be built by the Republic.

"The LAAT/i was a repulsorlift infantry transport capable of carrying up to thirty troopers. Secondary functions included reconnaissance, direct fire support, search-and-recovery, and low-altitude air-to-ground and air-to-air strikes against vehicles ranging from airspeeders to starfighters.

In addition to its trooper complement, housed on a deckplate protected by drooping wings and a sliding side door, the LAAT/i could carry four military speeder bikes in an aft-deployable rack. The crew complement comprised a clone trooper pilot and co-pilot/forward gunner in the hunchbacked cockpit, and two auxiliary gunners stationed in pinpoint composite-beam turrets extending on articulated arms from the troop cabin. An IM-6 Medical Droid was commonly carried aboard in an emergency locker. In the event of emergencies, the cockpit capsule could separate from the main craft to act as an escape pod." 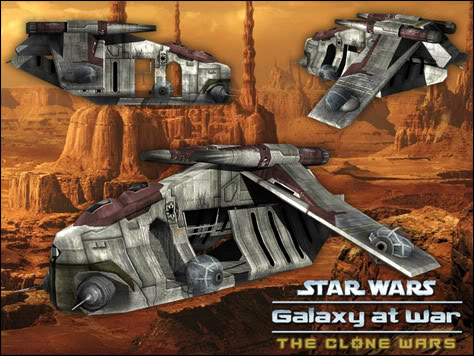