Please welcome Alpha 17 Quercus! Among other things it includes triggers and better mod support as well as units on walls and a major gameplay rebalance (WIP). Plus new art and music, and new maps to play on.

Download and installation instructions are available for Windows, Linux and Mac OS X. 0 A.D. is free of charge and always will be. Although you might find some people selling copies of 0 A.D., either over the internet or on physical media, you will always have the option to download 0 A.D.completely gratis, directly from the developers. 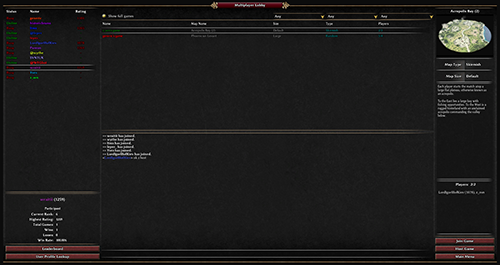 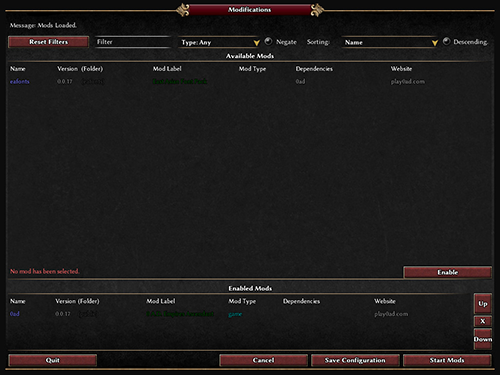 If you build an outpost within a certain area (event), your enemy’s walls are destroyed (action);
Alternatively, if a timer runs out (event), an army spawns on the border of the map and marches towards your city (action);
Or, if a certain building is destroyed (event), the player who owns it loses the game (action).

The new trigger system is perhaps the most important feature that was missing to make narrative campaigns and scenarios possible. Triggers also make it easier to design custom victory conditions, or even multiplayer maps with unique gameplay aspects. Events and actions are easily extensible with some Javascript knowledge and offer a huge set of new possibilities for creative map designers.

Several parts of the game and the engine have been improved for better performance. Comparing with Alpha 16, you’ll notice significantly higher framerates at the beginning of the game. There are also some improvements observable later in the game, but also additional overhead from new features. Improvements have been made in these areas: 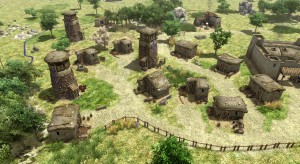 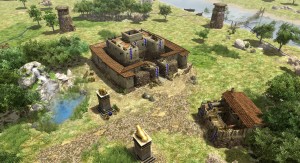 Please see the “Get Support” page on our website to find ways to get help from the active and friendly 0 A.D. community.We are well aware there is some room for improvement in 0 A.D. Some known issues are: Lag, visual glitches or textures not loaded, missing animations and more. When you provide feedback, we would ask you to focus on some of the other points that could be improved. Thanks.

We are seeking volunteer contributors in programming, art, sound, documentation and more. Programmers are especially welcome and can get started immediately.Interested? Log onto #0ad-dev on QuakeNet on IRC and meet the developers. Also, you are invited toregister on our forums and start participating!

Do you want to try your hand at creating new maps? Especially now that triggers have been added? Then you get some extra motivation from the Council of Modders who are now hosting a map making contest. They do encourage you to make use of triggers and graphical mods as triggers and better mod support are important features in this release. The deadline is 30th November.

We name our releases according to development status (“Alpha” or “Beta”), successive release number (1, 2, 3, …) and a word relating to the ancient world, in alphabetical order (“Argonaut” for A, “Bellerophon” for B, …).“Quercus” is Latin for “oak tree”. The name relates to 0 A.D. as it could refer to the oak leaves used in the corona civica, a military honor given to a citizen who saved the life of other citizens or soldiers whilst in battle. Recipients were allowed to enter the Roman Senate, and were required to wear them at public gatherings. (Thanks, Jonathan L.!) This name suits this version well because of the many bugfixes and optimizations in Alpha 17 that make the game stabler and more mature, like an old oak tree. Also, the increased support for mods allows the game to easily diverge into more varieties of gameplay, like branches growing from a tree trunk. (Thanks, ltms!).For the next alpha, we welcome fan suggestions for words relating to the ancient world beginning with the letter R. Keep it original and related to the time frame portrayed in 0 A.D. (appx. 500 BC – 1 BC)!

Contact info for press, bloggers, etc.: aviv@wildfireLATINgames.com without the capitalized name of a language spoken in ancient Rome.

Awesome! Made my day!

It's always great to see progress of this promising project. Congrats!

Great news! Especially glad to hear about the ship AI. I'd say the greatest challenge for 0 a.d. right now is that you are running out of letters in the alphabet. What will happen when you reach version Zarathustra?

Hopefully we'll reach Beta by then :) (And hopefully we won't have to go through the entire alphabet again during the Beta phase.)

The game is Awesome! it has the potential to become the best strategy game ive ever played! just hoping you'l add some "huge" type maps later on as the build becomes more stable =) Keep up the good work!

This game getting better and better really love it

The game is great :D I really can't wait for You to make it stable on large maps :D

I have only to say that I disagree with the "Fog of war" that hides resources, I mean, if i'm an scout and go around scouting, I have enough memory to remember where was a gold mine, or a tree.

Agreed with frenchiveruti, I'd like to keep trees and other natural entities (like resources) out o the fog of war. Fog of war only should cover enemy structures and/or things that changed. Though I think that's exactly what Itms - the coder - has in mind too. Great work!

(@feneur: Could you please remove the double content in the Triggers & Mod section? Other than that, great write-up, perhaps missing to mention that Philip/Ykkrosh is the one who made these tremendous engine code design improvements and optimizations happen. tanks man)

Thanks. IndieDB's WYSIWYG mode can be a pain to work with at times, I did see that it duplicated the download images a bunch of times, but that one I didn't catch.