It's not just the Romulans getting new models. I've decided to go back and add some additional ships for the NPC races.

Well, after finishing off the upgraded Romulans, I found that I had some SFC models that I had converted and hardpointed for a fellow modder which I never used myself. I decided to put them to good use and create some extra ship classes for the "Other Races" in KA2 EAW. You will see them quite a bit, as I've made good use of map races on the latest maps.

In the order I added them, first up is two new ships for the Mirak Starfleet. The Mirak were all but destroyed by an ISC Bombardment, rendering their homeworld of Miras uninhabitable for decades, but small groups survive, essentially as pirates although naturally preferring military targets (particularly Lyran, Romulan or Klingon ones) to the usual pirate fare of civilian cargo transports.

The Fox Class Destroyer (MDD) is armed with a triplet of Missile Scatterpacks and a pair of Disruptors for close-in defence. She is nimble and quite well armed for her size. 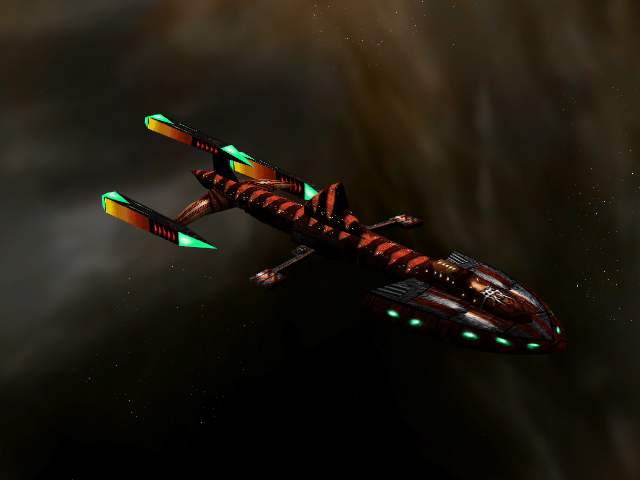 Often found working with the Fox in Destroyer Flotillas is the larger Jackal Class Light Cruiser (MCL). Armed with quadruple Missile Scatterpacks and two Disruptors, the Jackal is also equipped with ECCM to aid in the targeting of allied ships. She functions as the head of a Flotilla comprised of 3 to 6 Fox Class MDDs 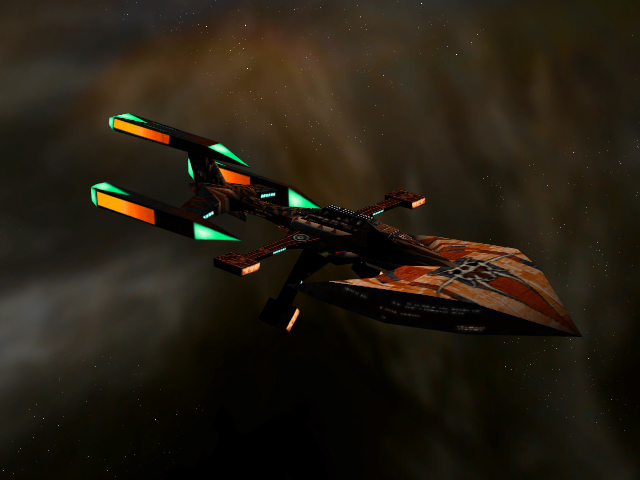 Next, the blood enemies of the Mirak Starfleet, the Lyran Star Navy. The Lyran Star Kingdom was under ISC occupation for many years, although since the ISC retreat to the Fringe they have slowly begun to rebuild their fleets; political issues mire their progress. They are erstwhile allies of the Klingon Empire, the two mutually respecting either others battle prowess and warrior culture.

The Caracal Class Destroyer (LDD) is used much like a larger, Lyran version of the Klingon B'rel. She is armed with 3 Disruptors and a pair of Heavy Disruptors, and is equipped with ECCM to boost targeting accuracy. They often pair up with small groups of Lynx Class Frigates, and occasionally form traditional Destroyer Flotillas, although this is not a tactic favoured by the Lyran Star Navy. 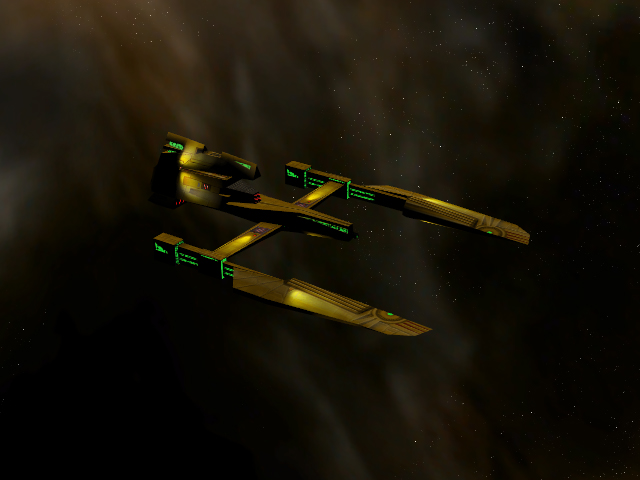 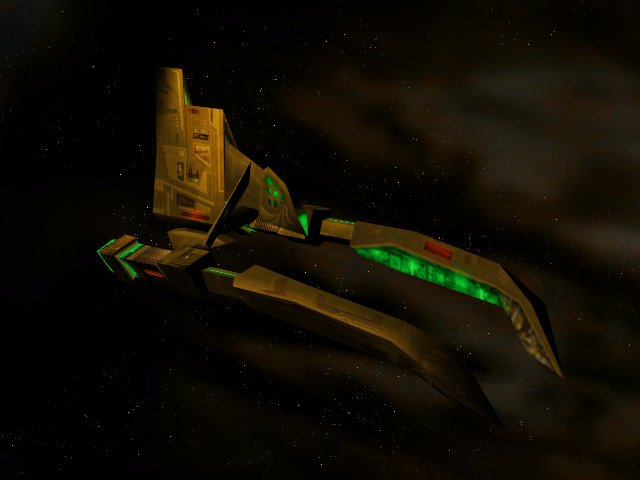 Next, the Orion Pirate Cartel.

Rarely seen, as the Orion Pirates usually favour capture to destruction, the King Pin Class Dreadnought (PDN) is usually the personal ship of a Cartel head, and is generally kept out of combat given their rarity. The Cartel head will however engage in combat when his base is threatened. As with all Orion Pirate vessels, she is armed with an eclectic mix of weaponry, in this case mainly Klingon in origin. This is speculated to be due to the fact that when tangling with Klingon ships, the Orion Pirates needed extra firepower, and obtained their weapons from the wrecks of Klingon ships they had disabled. She is generally found armed with a pair of Federation Type B Phaser Emitters, up to 6 Disruptors, a triplet of Heavy Disruptors, and a variety of torpedo armament, most commonly a pair of Photon Torpedo Tubes. Some have been sighted armed with an additional Klingon Heavy Photon Torpedo Tube. It is unknown how the Orion Pirates obtained such advanced weaponry; only Klingon capital ships mount such torpedoes and the likelyhood of the Orion Pirates disabling such large ships is slim. 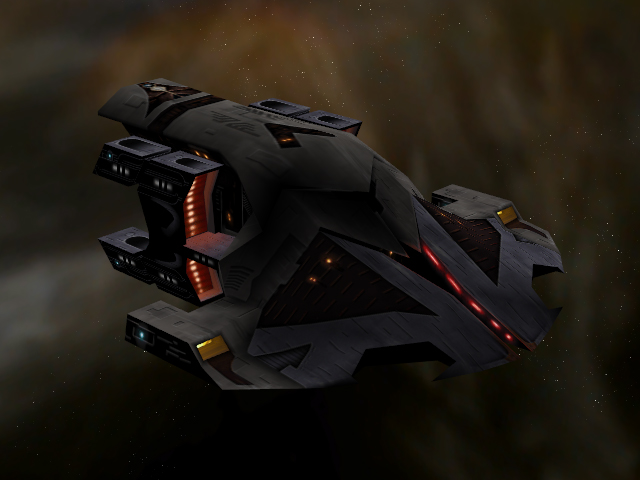 The Hydrans have begun to get back on their feet after years of Klingon, Lyran and ISC Occupation. As the reconstruction process continues, the Royal Shipyards of Hydra are producing larger and more sophisticated vessels.

(to fit in a new class of ship, I relegated the Baron Class from a Command Cruiser to a standard Heavy Cruiser. I have downgraded her weaponry to 4 Gatling Phaser Emitters, a pair of Hellbore Cannons and a Fusion Beam Emitter)

The latest ship in the Royal Navy is the Duke Class Command Cruiser (HCC). Using a new tri-nacelled design, the Duke has enough power reserves to mount considerably heavier weaponry than the Baron, but maintain her smaller counterparts high flank speed. She is armed with 5 Gatling Phaser Emitters, a pair of Hellbore Cannons and a single Photon Cannon. Befitting her Command Cruiser status, she also mounts a full Electronic Warfare suite. 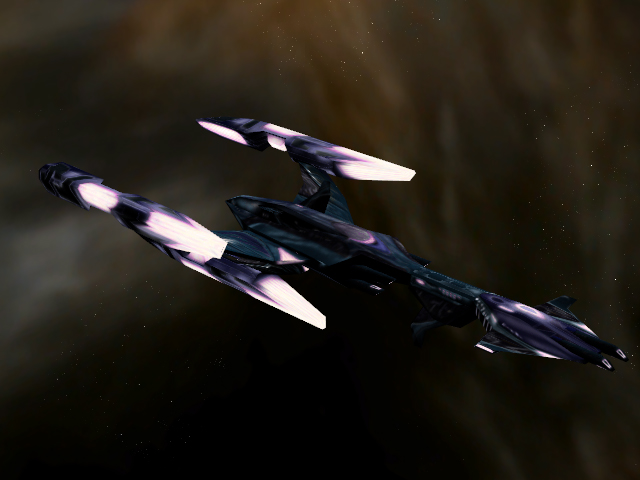 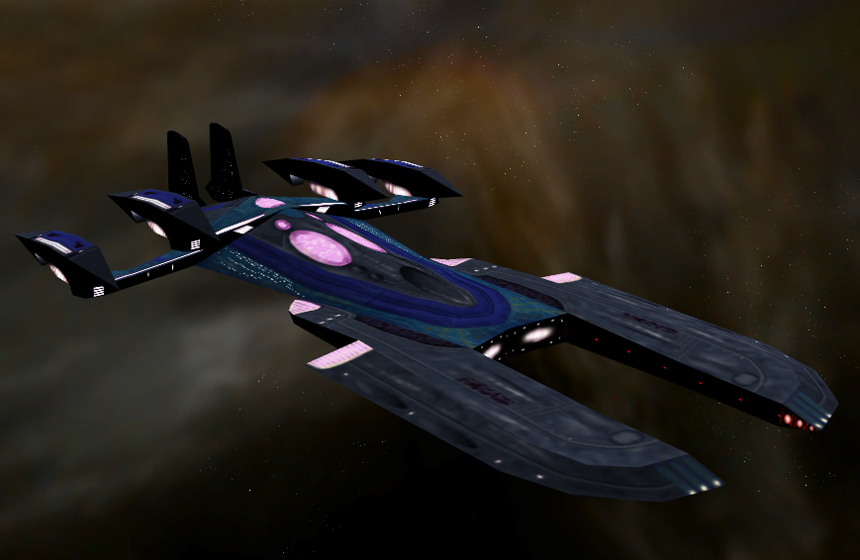 On a pragmatic note, i've also isolated a few small bugs with Hydran weapons (some did not produce sound effects etc) and generally made sure everything is working properly. I've also converted more maps to KA2 standard. With 1.2, you should be able to play any of the stock A2 maps in KA2.

Lovely models. Looks like 1.2 will be a great update. I need free up some time to play your mod more!