A lot of new assets and the introduction of the first level scheduled for release... 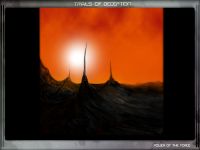 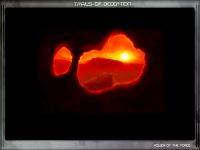 For vast millennia, space-faring sentient beings barely new of Abraxous' existence. Because of it hostile climate, lack of life, and overall grotesque panorama, they have left it alone. Its surface is but cooled magma left from the deposits of thousands of volcano spewing magma as it was slowly created, then cooled over the thousands of years it was left unscathed. An with no biological compounds to break the rock and slowly create a terraformed world, it remained unchanged, unaltered and lifeless. It was not even a ghost planet, but a stagnant dead planet. Then the mining projects began.

Through its life, and the most recent actions of Abraxous' Terraforming projects. The rock being a acidic base the melting from its molten age gave the atmosphere a red oringish tint. Then as the Terroforming continues an the atmosphere becomes think and filled with an nitrogen and oxygen dense setting, the atmosphere began and continues to pore down its acidic aspects as harsh acidc rain from orange clouds. Not powerful to burn skin, but can quickly over a matter of a few years, can weather most structures. Strong winds are also a repeated occurrence on the planet, not due to normal conditions but for the terroforming to continue as steady flow of winds across the planets surface is needed to complete, optimum transfer of the worlds atmosphere.

Many aspects of life on Abraxous are affected and geared toward these conditions. Many buildings are weathered down and even the mines themselves, are contained inside the hollow remains of an ancient volcano's core. Because of this most, if not all buildings that still stand are made out of strong metallic alloys that reduce the rate of weathering immensely, but signs still due appear on each and every building. And this setting does not allow the kindest beings into the area, sentient or company. 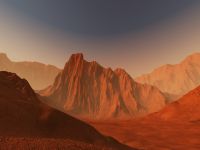 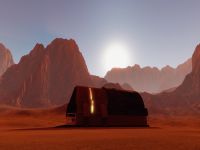 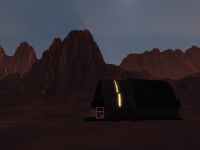 Wookiepedia wrote: B1 battle droids' heads were designed to imitate the shape of a dead Neimoidian's skull. In this way, they were intended to strike fear into an enemy's heart.[4] In addition, their bodies vaguely resembled those of the Geonosians.

B1 battle droids were physically identical to their direct predecessor, the OOM-series battle droid; unlike OOM models, however, they were not color-coded according to function, if any. However, some were painted with different colors to blend into a certain environment 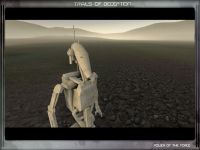 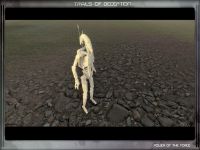 Wookiepedia wrote: The AT-TE was a multi-purpose assault vehicle capable of tasks ranging from the transportation of platoons of clone troopers around a battlefield to full-scale attacks upon enemy installations. The vehicle performed most admirably in support roles that involved providing immediate cover fire for battalions of soldiers. AT-TEs were often deployed in large numbers to overwhelm the enemy through sheer volume of fire.

An AT-TE was impervious to ion damage due to built-in electromagnetic shielding. Its average speed was 60 kph (37.2 mph). This plodding pace allowed it to penetrate energy shields, a feat that was impossible for repulsorlift craft. Effective in numerous terrains and environments, some models of the walker was even capable of scaling vertical cliffs, similar to the later UT-AT transport 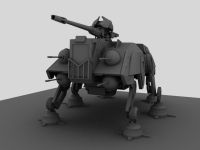 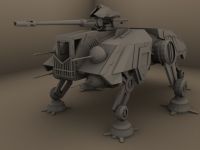 Wookiepedia wrote: The Scimitar had a pair of folding wings around a round cockpit; a design which was used on T-class long-range personal cruisers like the Valcyn which were used by Sith Lords like Darth Bane during the New Sith Wars about a millennium earlier and would later resurface in the famous TIE series of starfighters used primarily by the Galactic Empire.

In front of the round cockpit (the whole forward-center section of the spacecraft) of the vehicle was a rare stygium crystal-powered cloaking device which was capable of creating an invisibility field which could sneak through even the most advanced of security technologies and allowing its master to evade pursuit while on his missions. 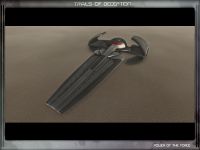 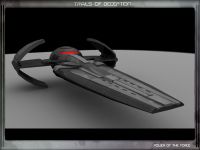 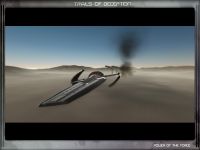 GOod start, the model of AT looks preaty good.

nice models but the side armour on the AT-TE must be at an angle if i remember right.

Power of the Force Developer & Publisher