The entry and exit wound visuals are more dynamic now. Before each ammunition type had a specific decal for entry and exit respectively that was simply pasted in place. Now they are rendered. That means that I can control them in much more detail. How a wound will look is now determined by the projectiles energy (velocity and mass) and its size. For the exit wounds it in addition depends on how much cavity was created in the body part which was hit by the bullet.

The new entry and exit wounds.

Since the wound visuals now depend on the real-time properties of the bullet, it also means that a bullet that has lost energy (by passing through a door or another body for instance) creates a smaller wound on impact than it would otherwise.

Just as a note, all of this is just regarding the visuals. All of these calculations were already being made for the physiology before, so there are no changes to the physiological responses when I talk about the wounds being different.

The other big addition is the new decals on body parts. They are:

Blood streaks and soaking appear at wounds. The streaks paint blood trails on the limb out from the wound and pulled down by gravity. The soaking appears around wounds on body parts that have clothing on them and is essentially a round area of blood that expands over time.

The powder burns appear on body parts when a weapon is fired really close to them or if there is an explosion close by. This is caused by the burning powder expelled from weapons and explosions and makes a dark stain on the affected body part.

I've also added a couple new weapon components. They are a couple of optics and a new fore grip. 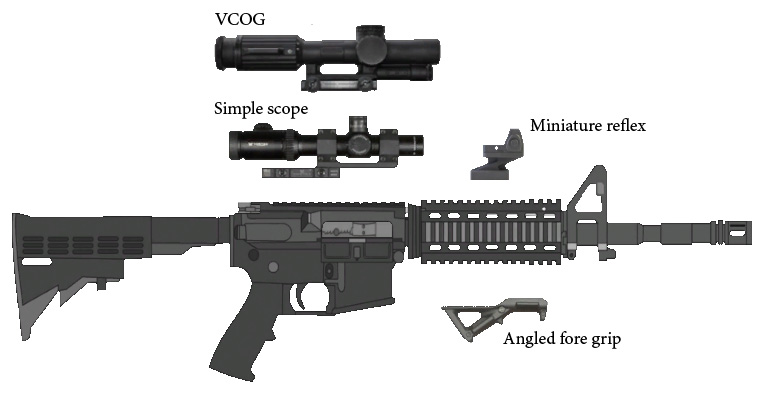 There is a new (and optional) visual effect that simulates the kind of image or video censoring that you can sometimes see in news media images and video. It pixelates portions of the rendered game to cover head injuries and blood pools. My idea in adding it is not actually to censor the game, but rather to add another bit of emphasis to the gore. It hints that there must be something bad behind it. I'm not sure this trick works for everyone, and probably no-one would like to have it on all the time. It is turned off by default.

Aside from that above there are a number of other improvements and fixes that I am glad to have made but I wont list them here.

I was also featured again on the YouTube channel Random Madness. Thanks to Valentin for that, please watch the video and check out his channel. If you like my game you will probably like his gore reviews.

That's it for this time. Please enjoy the new demo!

I also have a question. Would it be possible for pools of blood to form according to what kind of floor they are on? For example, thin streaks of blood going between tiles or running along side wooden plank floors.

I've been thinking about that a bit before. It would be really nice for the uneven floors. I should make an effort to figure out if it's possible without being too performance intensive.

Maybe you could try it with some form of height mapping?

Yes that will be a part of it for sure.

I don't have a full change log but this one is more detailed: crisisresponsegame.com/index.php/84-articles/81-change-log

That gore is AMAZING well done!

Thank you, very nice to hear :)

It'd be cool to have the blood of someone splatter all over the guy behind the one you're shooting.

There's possibly quite an easy way for me to accomplish that which I haven't tried. The question is how it will affect performance. I will try it and find out :)

If it's a performance hog then make it optional if you decide to add it. I have a pretty beefy system.

I have a question

Will this game will be free when its fully release?

When can we expect a new demo?

I expect to release for testing during the week. Check twitter @bloodandbullet if you're interested in helping out. Usually testing will be about a week and then release.