Tonight I just got a new damage system done for the mod. It's not perfect yet, but the basics are done (most stuff explained here now is done, some are still at plan stage). The system involves locational damage, armor, body health and blood. So how does this work? The locations are very rough and simple, just check what height the object bounding box was hit, then some randomization to make it able to hit arms or different legs. The plan is to remove the randomization, so you don't hit left arm when you shot the right. Each location has their own armor and body health points. Blood is non locational as it can flow around. I think it would have been too complicated to try make it locational.

Well, everyone knows how armor works in games: You get hit, armor saves some damage and the rest is done to health. The body health works quite the same way, and then there are some little differences. If body health goes low, it is possible to start bleeding. If blood ever goes to 0, the character dies. Some body parts can have their health to 0 and character stays alive. Low health body parts will have decrease in their function. For an example damage to legs make character slower. Characters also regenerate their body health and blood, but this happens quite slow, so it's a good idea to have a medikit.

Other news: The first character, Spikeclaw, is soon almost "fully" animated. It's already got walk, run, single arm attack (left and right), dual arm attack and simple idle and death animations. And as I've made the animations, I've tested them ingame as soon as possible. The missing animations are: jump, jump attack, couple pain, more death and more idle animations. When I get the animations done, I'll make some sounds for it. Then I could record some video of the action. 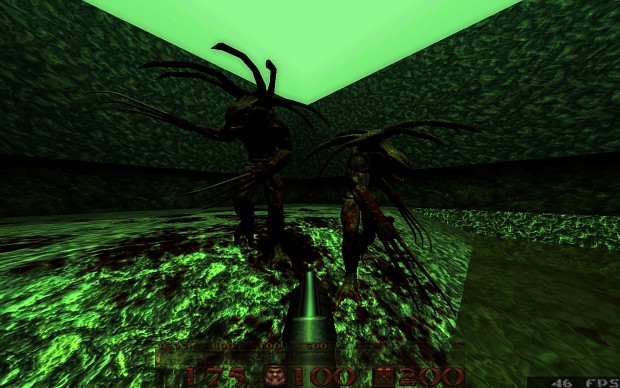 you should upload a video of it here on moddb.