We are slowly entering into the last 6 months before release of Dead In Vinland. The team is getting larger and stronger, the pace is good, so we’ll start to post news on this blog more regularly.

Today we’ll unveil a new playable character, making it a total of 9 unveiled characters. Already one more than Dead In Bermuda!

For the new characters we will unveil on the website, we decided to talk less about their past, since it could spoil some major intrigues of the game, but more about the inspirations we had when creating them, their strengths, etc… 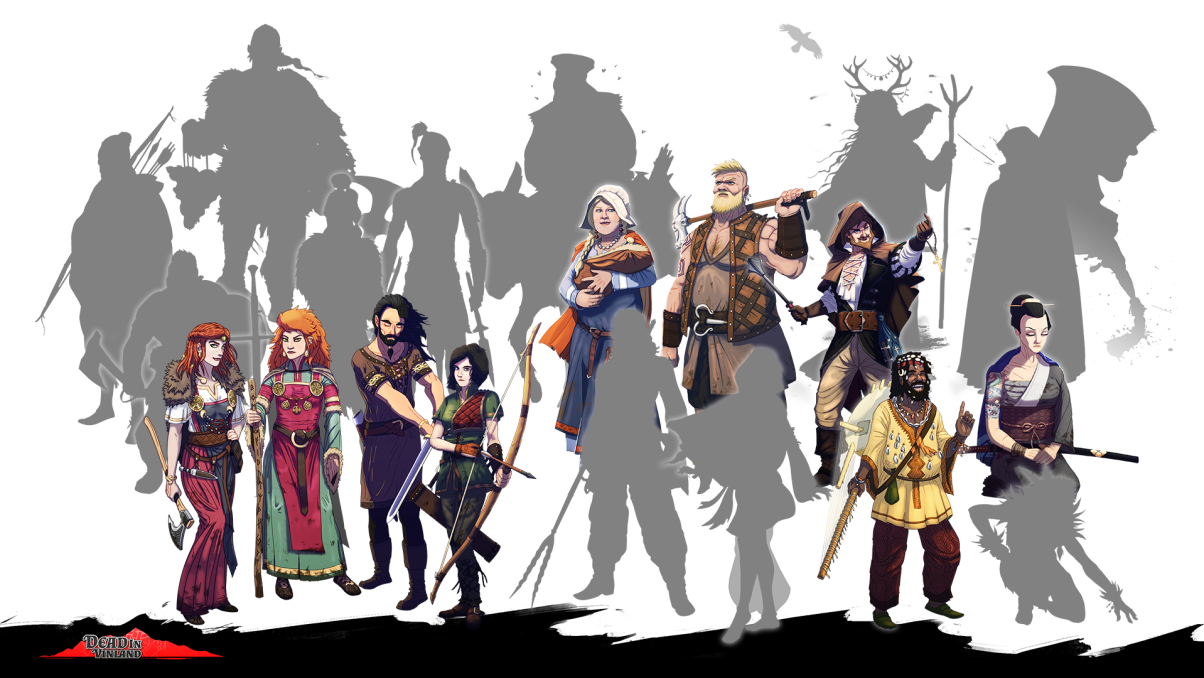 So today we’ll talk about Cissé Kouyaté, one of the recruitable characters you may find on the island. 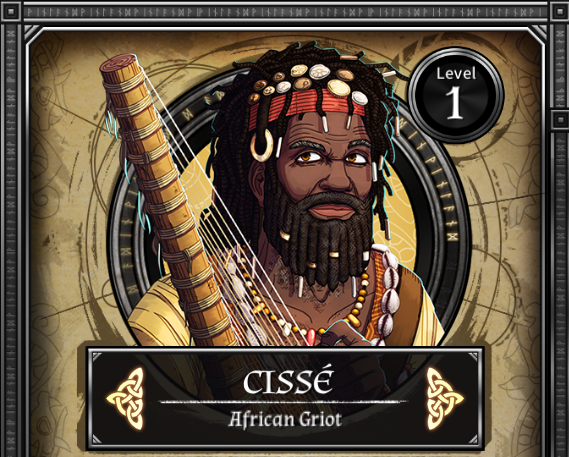 Cissé is a “Griot”, that is to say some sort of bard and storyteller, very important in the african culture. They are very respected as keeper of knowledge and stories of the families, and also as musicians. This status was hereditary, so you can recognize griots from their family names.

Even today, you can find remnants of this tradition. The famous singer Youssou N’Dour for example is the son of a Griot woman.

In Dead In Vinland we wanted a cast of characters that could show a diversity of cultures around the world. They all ended up on this mysterious island for a reason, that the player will (hopefully) discover.

We also wanted to keep some historical consistency, so we made sure that all our characters could have been alive in the same +/- 100 years timeframe. At the time of the game, the Mali Empire was one of the most powerful kingdom in Africa. Founded by the Lion Prince Soundiata Keita, the enormous kingdom covered the actual Mali, Mauritania, Burkina Faso, Niger, Gambia and Ivory Coast, and even more!

The Mali Empire was also extremely rich thanks to trade of ivory and slaves, and to their mines of gold. 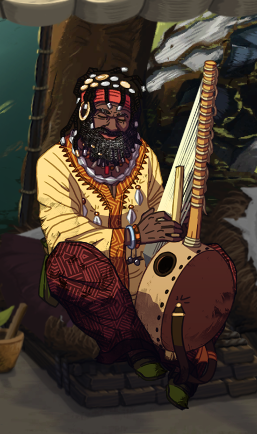 In this context, our character is the personal Griot of the Emperor himself. A very important and respected man, but above all it’s his kindness and “joie de vivre” who made him a beloved member of his community. He doesn’t care about prestige or material wealth, he just lives for the sake of telling tales and playing music, preferably both at the same time.

A very simple man, with an infinite stream of wisdom coming from ancestral stories told from father to son.

In the game, you may interpret his laidback attitude for laziness, but you’ll see that his mind is stronger than many. He’ll never lose faith on humanity, and will never lose hope.

On the downside, this “extremist pacifist” will oppose any use of violence. It can be problematic in complicated survival situations… 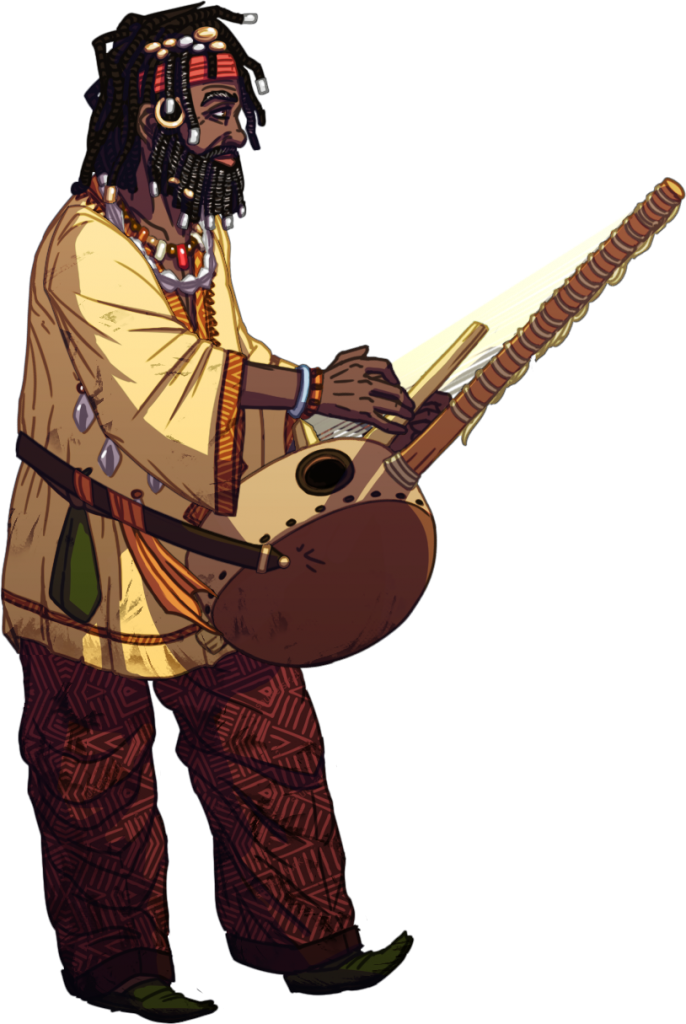 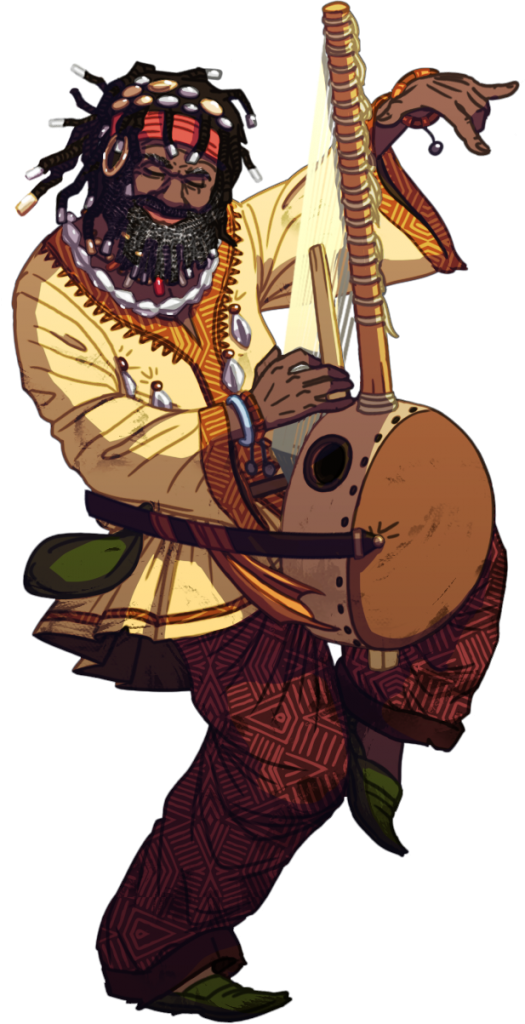 If you played Dead In Bermuda, you may have noticed (or may not!) that a certain character, Yuri, only speaks in russian philosophic quotes from famous people like Tolstoy, Lenin, etc… We thought it was a lot of fun, and we wanted to keep the same principle in Dead In Vinland. When I designed Cissé, he made me remember of an old african football consultant on a famous french radio football show who always, like ALWAYS, ended up his arguments by quoting an african proverb.

“Like the proverb says in Africa: you should wait to have crossed the river completely before saying that the crocodile is ugly.”

So I had my Cissé: an old bard and storyteller who strikes you with his crazy african proverbs, and you don’t know what to answer.

On the plus side, we had a whole afternoon of good laugh at work looking for zany african proverbs that we could use.

That's all for today folks!